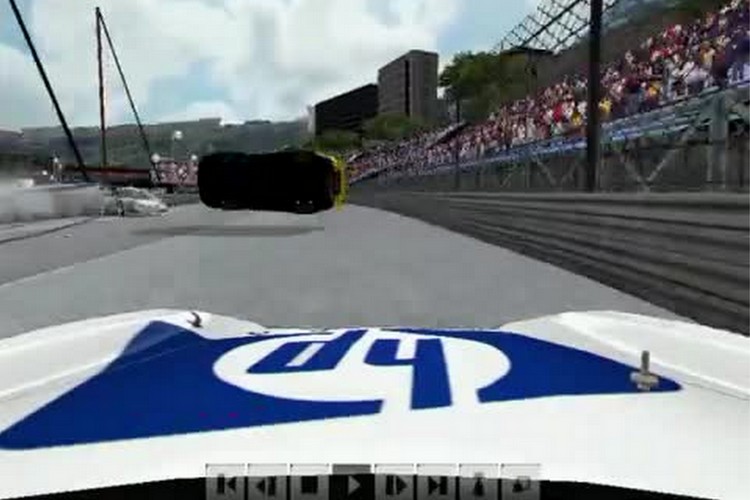 A pile of mid noughties’ sims had me heading straight for serious simming overdose… And just then, a saviour of sorts appeared unexpectedly.

Life moves in circles, they say. So, after a spell on the Playstation 2, I rediscovered a new batch of PC-sims. And soon after found myself facing the same predicament that had driven me to the Playstation for starters: sim obesity. Too much sims, mods and tracks were thrown at an absolute greedy bastard who lacked any sense of self-containment.

What I needed, was some kind of direction. Something that would keep me focused on one mod at a time. Along came online racing. And it looked at least as nice as Jennifer Aniston.

Still, facing Jennifer involved the necessary shyness and so I entered my first race under a nickname; incidentally the name of the main character in a novel I had started while in college. A novel that, as many such efforts, never neared completion. Timo Vermeersch was the chosen moniker and somehow, that has stuck ever since. To this very day, I race as Timo.

For my first online race, I used a tool called F1RST. Races were organized in heats of four. Results of each heat were then uploaded to a site and overall race-times decided the final ranking.

I entered a series using a Mini Cooper mod for F1 Challenge with the tool and stuck to it for exactly two races. The first race was on the Phoenix oval… Four Mini’s running about twenty laps around a one-mile oval… It did not stop another driver from trying to block me as I was lapping him. Oh yeah, that first online race was a true blast.

I was convinced that things could only improve and so entered the second race — three laps around the Nordschleife — in high spirits. Only to launch the Mini on one of the Schleife’s many banks and find myself on the wrong side of the fencing, unable to rejoin the track.

By that time, I had already discovered a league called VMS (for Virtual Motorsport) that called itself a League of GT-Men. They were about to start a 10-round championship using a Porsche Carrera Cup-mod for F1 Challenge. Their servers were able to handle a full field of 26 cars simultaneously… This was the real deal. So I eagerly applied for a car and one of the admins, a guy called Serge, handed me Frank Stippler’s 911. I was all set to go.

The first race was at Imola… in the rain. To this day I cherish fond memories of that race. The thrill of standing on the grid, surrounded by twenty-five other crazed out Porsches… The endless eternity waiting for those darn red lights to finally flick to green… pulse ever increasing. And then we went… 26 mad men all looking for one single way through the same Tamburello-corner. It nearly felt as good as the real thing. Heck, in my mind, it was the real thing. I finally was a racecar driver.

But there was more than the races itself. The league had its own website and forum. Suddenly, I could banter all night long about cars and races without immediately being tagged the town’s fool. I had entered a virtual community of gearheads, car nuts and racing aficionados.

The Imola-race had gotten so deep under my skin, that I started making short movies covering the races and posted them on the league’s website. I distinctly remember checking the forum about every 5 seconds after I had posted a new movie to read the comments it received. Oh, such a bright and magnificent brave new world that was unveiling itself.

After the Porsche Cup, I did one more series at VMS, an Alfa 147-cup. But I was on the look for a league to race Grand Prix Legends and found the Vlaamse Racing League, a Flemish League, and the GBGPL novice league. Those two would become my sim home for several years to come.

About a year later, one of the guys at the Vlaamse Racing League pointed me to the Historic Simracing Organisation. I had found my three racesim getaways… And to this day still race with one of them regularly.