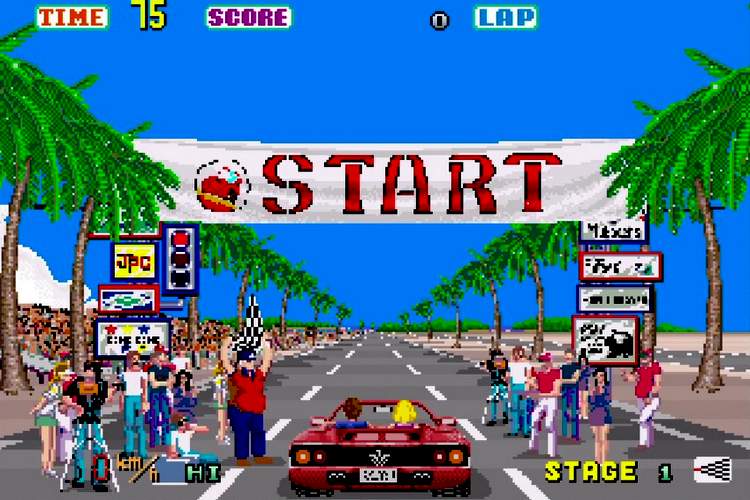 As the eighties roared on and the very first sims appeared, I went looking for racing thrills in amusement arcades and several other wrong places.

In 1984, a man called Geoff Crammond released REVS. It simulated a Formula 3 car from the era and is commonly considered the first race simulation. I missed it completely.

I had turned into a moody 15-year old whose interests had entirely shifted to girls and partying. It had also dawned on me that my chances of becoming a racecar driver were close to non-existent at best. No longer did pictures of Gilles Villeneuve drifting the number 27 Ferrari adorn my bedroom walls, but posters of U2 and Simple Minds had replaced them. The Atari 2600 was gathering dust in the attic and a hi-fi installation had claimed the place where it once stood. My sim racing had withered to oblivion.

My mother had a cottage down on the seaside in those days and that became our preferred spot for partying. The local amusement arcades were an invariable part of our nightly quests for cheap pleasure. And there, the last feeble sparks of the old race driver’s dream were cautiously rekindled.

I spent hours behind a cabinet called Outrun, navigating a Ferrari Testarossa as fast as possible through traffic. Even if the graphics were infinitely better than those of Nightdriver, the game was in essence pretty similar. There were no set-up possibilities for the car and one sensed that the developers had not spent too much time on the Testarossa’s physics.

Here comes the Sonny Crockett of the amusement arcades 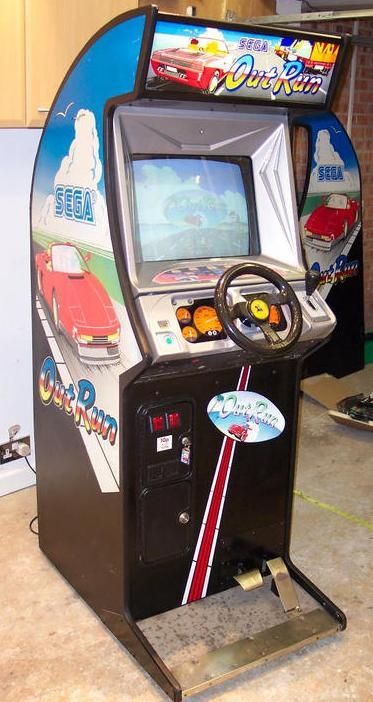 A steering wheel, pedals and a shifter… wow!

Still, the cabinet was equipped with a real steering wheel and two pedals: one for acceleration, one for braking. It even had a gear-lever, if only with two positions. All that combined to convince me that I had truly turned into Sonny Crockett chasing his Testarossa across Florida… And in the second half of the eighties, that was about as cool as one could get.

I transformed into a police detective on a special pursuit squad. At the wheel of a black Porsche 928, Mr. Driver was allotted 60 seconds to close the gap to a fleeing car. There, an additional 60 seconds were added to bump and slam into the criminal’s car and stop it.

Even if a step ahead of Outrun graphics-wise, it still had the same shortcomings: no set-up possibilities whatever and very basic car physics.

From Ferrari to Porsche… and just barely eighteen.

But the Chase H.Q. cabinet put in a real driving seat on top of the steering wheel, pedals and shifter. I could now actually retrieve from my complicated eighteen-year-old world behind the wheel of a Porsche 928.

I have fond memories of those partying sprees at the shore. Often, we would go without parents. Just a bunch of young kids looking for some fun… Often in wrong places. 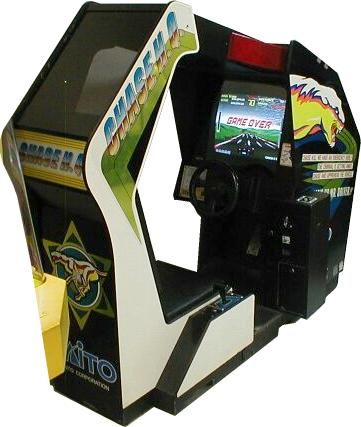 One of those places was a bar on the sea-front called Le Barbu. It was the hey-days of New Beat and DJ’s were gently turning into stars. Le Barbu always managed to have the DJ of the hour. People would come down from Brussels and Lille, even Paris, for a night at Le Barbu.

Leaving that place at about 6 A.M., a wet autumn sun setting over the North Sea, the salty air sweeping some of the alcohol-induced haze from our minds… The whole place felt detached from the rest of the world. And for some brief moments, becoming a race-driver seemed feasible again. Outrun and Chase H.Q. certainly contributed to that fantasy world feeling.

All-in-all though, my sim activity remained at a low ebb during this period.

I had by now stumbled into my junior year of law-school and mother deemed it necessary to get us a full-blown personal computer… My sim racing was about to get a serious boost.