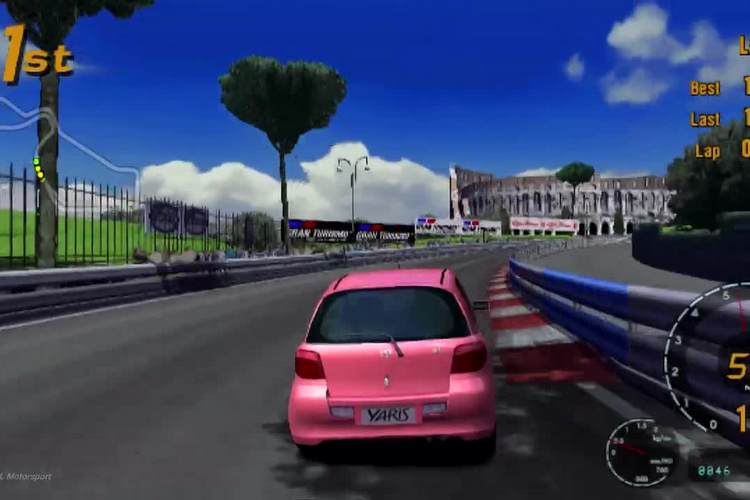 It has been said that a step back is often the best answer to a growing loss of perspective. So, when sim racing was getting overwhelming, I turned to Gran Turismo.

As we neared the new millennium, things were moving swiftly in my life. I moved into a new apartment with my girlfriend. The girlfriend and me got married. A real life job occupied me ever more. And as the life of a young professional in the western hemisphere was taking its course, time was becoming a scarce valuable.

At the same time, an ever-expanding sim community was providing additional content for GP2 on a daily basis. But without any pointers as to what or where to race first, I felt increasingly lost amidst all those sim goodies. And so, even if my PC and racing wheel both got their proper place in the new apartment, I found myself simming ever less.

It was, in essence, the old story of too much choice and too little time.

Around the same time, my brother received a Playstation 2 from his girlfriend. I discovered Gran Turismo 3, driving a Toyota Celica in one of the GT3 head–to-head rally challenges and was hooked on the spot.

A trip to the local discounter to get my very own PS2/GT3-combo was not very long in the making. And so my racing wheel was relegated to gather dust somewhere in a dark cellar, while I embarked on a novel Playstation 2-journey; the power of which was not be underestimated.

Time was still as scarce as before and GT3 was all but skimpy when it came to cars or tracks to drive; anything from a stock Toyota Yaris to a full blown Group C-car could be driven on 33 different track layouts.

But the main difference with sims on the PC was that GT3 offered the Gran Turismo Mode. That mode offered the structure I had been so yearning for within the world of Grand Prix 2. And that procured the vigor and aim needed for my imminent ascent through the ranks of the GT3-world. To this day, I have very fond memories of some of the cars that crossed my path during that quest.

I remember a five round Toyota Yaris-cup. One of the races was on the fictional Rome track. To me, that track always felt like at a cross between the Adelaide Formula 1 circuit and a long walk through Rome I once took. Merely to get my teeth around a slice of award winning pizza. Even if I subconsciously always understood that this was pure fake, in that it did not even simulate something real, simming had never ever felt more realistic.

The Yaris in Rome: one of my favorite combo’s

Another favorite car was the Corvette Grand Sport. With its electric blue and white stripe livery, the black rims and the two red dots on the left front fender, it was about the most beautiful thing I had ever seen in a sim. And then I have not even mentioned the quality with which GT3 reproduced the sound of that massive V8. I picked every series for which the Corvette was eligible and for quiet some time, drove nothing else.

The Corvette Gran Sport also yields nothing but good memories

The final mention should go to the Toyota Celica. Ten years had passed since I first drove Papy’s Indianapolis 500, but this was the first time I was driving a rally car in a sim… Fabulous feeling.

And finally, I could drive a rally car…

Still, for all the graphic beauty and all the diversity GT3 had on stock, it remained a game. The majority of its tracks were a mere fabrication of the developers’ fantasy. My racing wheel could not be connected to the PS2 and I had retrograded to a game pad… And you could just not notice that the physics rather aimed at gamers than at avid simmers…

In a certain way, the writing was on the wall as of the first day the PS2 entered my new condo. This was only a phase, a truce in between things of a more serious nature.