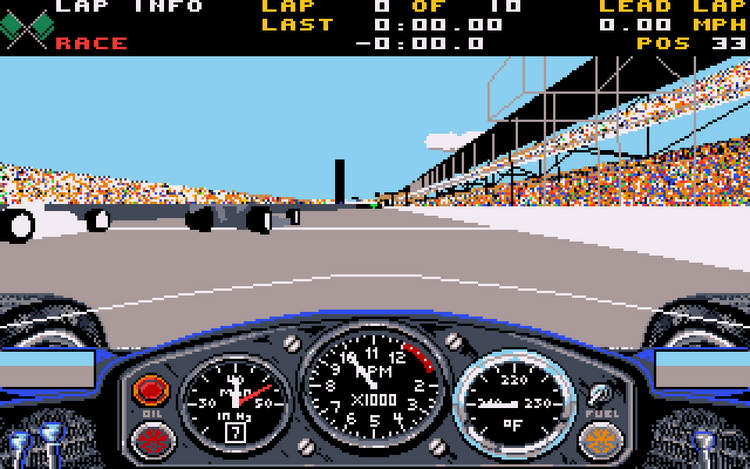 Europe and ovals… never has it been a happy marriage. But when I started simming for real, it was on the absolute king of ovals.

It was in late 1990 that our house welcomed its first PC; a “white label” machine assembled with parts picked from a menu. Almost like Chinese take-away. Which it probably was, come to think of it. An old high school friend who was studying to be a computer engineer was drafted in to decide on the best possible combination.

The main objective of the machine was endowing the papers I had to turn in for my junior year at college with a professional feel. But boy did it do so much more…

My computer-engineer-to-be friend had left me a bunch of floppy disks with games. The car games on those really lacked appeal. And the early days of that first PC were wasted on Wing Commander. A game that often tagged me as “traitor”.

Then, some months later, my high school friend provided me with some additional games. One of that new batch would soon represent a serious threat to me ever handing-in any paper at all.

It carried a game developed by a company called Papyrus with a name, Indianapolis 500 – the Simulation, that did not leave much for the guessing. To this day, it continues to surprise me how just one track with only left hand corners and three cars with graphics that were mediocre at best, managed to inspire such levels of passion. 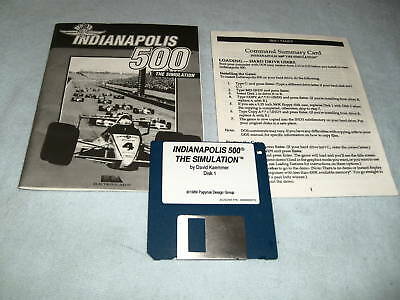 In today’s world, sim racers are spoiled with an abundance of cars and tracks to drive. The choice is such that I sometimes feel unable to make a pick… And end up hopping from one car to another track without really driving anything.

Some days I long for the simplicity of the Indianapolis 500-days: just the one track, with a layout that was, honestly, not hard to master. But the feeling when I knocked one tenth of a second off my personal best after days of trying… And the never-ending hope to one day be ready to tackle a full-blown 200-lap race… the equivalent of the real life Indianapolis 500. I never ran a full 500 miler on that first sim, but boy did I prepare.

Endlessly lapping to discover the fine differences between the cars. And then delve into the near-infinite set-up possibilities to set a car to my hand.

Working on my steering technique. This was long before PC steering wheels existed; I did not even have a gamepad or joystick on that first PC. And so accelerating, braking and steering was done with the arrow-keys on the keyboard. Just hitting the left arrow and keeping it down in a turn however had the car veering straight towards the infield; most often ending with a spin; or worse.

It was equally impossible to just keep the forward arrow, used for acceleration, pressed down the entire time. A perfect line through a turn required some slowing down on the approach. And just hitting the forward arrow on exit would spin the rear wheels and equally often end in a spin.

So I perfected a technique consisting of repeated short stabs at the left arrow to steer the car while simultaneously doing the same, albeit more progressive, with the forward arrow to speed up. Centuries I spent practicing that…

One of just many Indy 500-movies that still float around on Youtube, 30 years after the game was released… What could be a better testimony of its qualities?

Graphically, Indianapolis 500 was a serious step back from H.Q. Chase and even Outrun. And gone was the fancy amusement arcade cabinet with steering wheel, pedals and shifter…

But the sheer feel Papyrus managed to put in the cars provided a sense of realism never experienced before… I had embarked on a journey that could only get better. Unser, Mears and Andretti were beckoning.