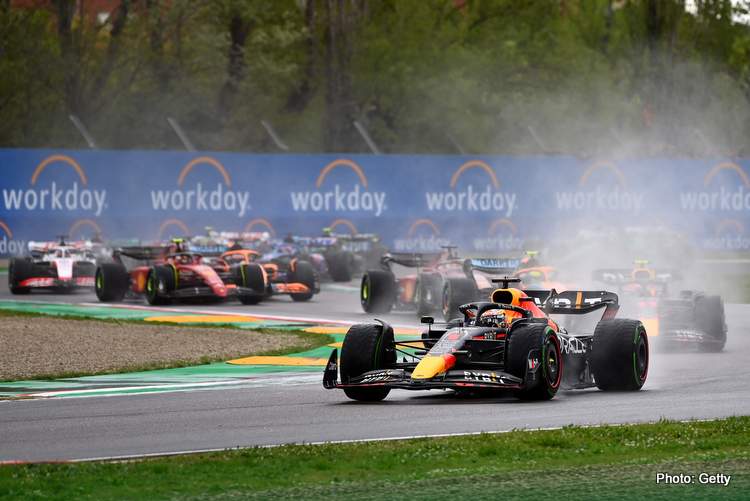 Racing at Imola might not have been thrilling, but a combination of new for 2022 Formula 1 regulations and some unpredicted weather created the perfect storm at the Emilia Romagna Grand Prix.

When the racing is bereft of wheel-to-wheel overtaking, there’s nothing like a sideshow to leave you wanting more. The runaway leader is no longer running away. The defending World Champion is back on the top step, and the man who made that plinth his own for the last 8 years, crossed the finish line long after confetti cannons had gone off at the end of the race.

Whatever your feelings are about last weekend’s Emilia Romagna Grand Prix at Imola, the result has ensured we’ll all be “tuning in” for the United States Formula 1 Grand Prix at the Miami Autodrome.

The racing so far this season has unfolded much in the way of a WWE bout. One wrestler repeatedly pummels his opponent for three rounds, leaving him lying there on the ring floor, chest heaving, ostensibly down and out. Just as the “man on top” appears to smell the scent of victory, his adversary experiences a miraculous recovery, stepping up to deliver a series of crushing physical ripostes that suddenly seem to level the fight.

Ring any bells? Sometimes though, truth is stranger than fiction.

While the result fell into the “Liberty playbook”, it was the rain and relatively low temperatures that demonstrated the impact of the 2022 F1 technical regulation changes. Delivering a rollercoaster ride of performances and red flags, impacting on the results of Free Practice, Qualifying, and both Races.

A parade that was well and truly rained on at Imola

The “Tifosi” had every right to be singing “F1’s coming home” on the banks of the “gelded” Modena Track. Earlier form and Free Practice only re-enforced the idea that the planets were aligning for the local team.

Even the wet conditions seemed to initially smile kindly on the Ferrari chassis, seemingly able to switch on their tires quickly and get the most out of them. Then it all came to a stop.

Not the weekend we expected, but it was a pleasure racing for our #Tifosi.

Apart from the “porpoising” effect, there were two issues facing the teams at Imola that present a real challenge: “Graining” and “Switching on” the tyres.

Many would say a failure of the latter is a cause of the former. They are indeed closely related; however, we can separate them. A tyre needs to reach the correct bulk temperature for it to become “switched on”.

“Graining” happens when this state has not occurred. “Switching on” the tyre is pretty much down to the engineers. But the driver is in control of “graining”.

If he pushes too hard before the tyre is “switched on” he gets to enjoy more understeer or oversteer and as a bonus, reduced tyre life.

The “undercut” is pretty much a tactic of the past

Last year, heat from the brakes was used together with pressure and tire warmers to bring them up to temperature. The new regulations have either minimised and/or bypassed these “avenues of pleasure”.

This leaves the job pretty much to the generated downforce, and subsequent chassis set-up. This makes qualifying challenging for the teams struggling in this area e.g. Mercedes. It also means that the “undercut” is no longer an attractive race strategy.

Last year when a driver exited the pits, he could pretty much be “on it” after a couple of corners. This is no longer the case as evidenced by the number of overtakes of those who had just exited the pits with new rubber.

One for the strategy rubbish bin, I think.

Earlier in the season, I highlighted the challenges inherent in the new cars of 2022 and the drivers that I thought would “thrive”.

They might not have the best equipment, but they all seem to be “delivering” – thank you, gentlemen.

All except one that is – Lewis Hamilton. The “haters” now seem to be out in full “told you so” force as George appeared to stump up the goods again, finishing just shy of the podium at Imola, whilst his “captain” languished out of the points.

For those who think that “Hammer time” is history. Go read my colleague – David Terrien’s article titled: Too Early To Bury Hamilton . Enough said.