Perez: Max is the best driver in F1 right now 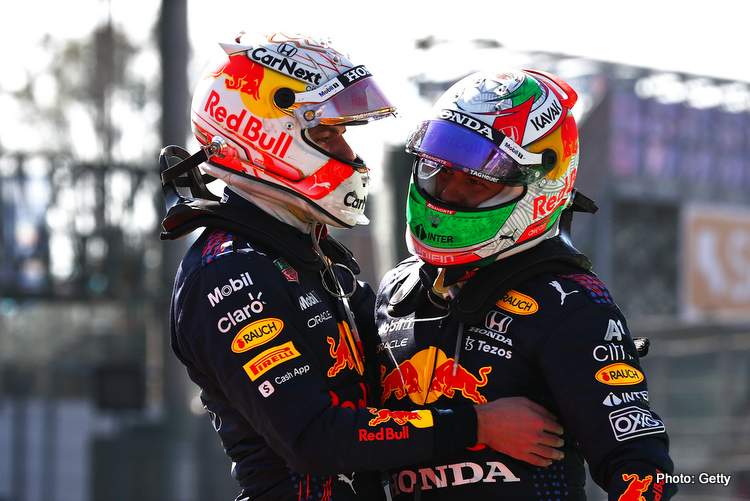 Sergio Perez is the best teammate Max Verstappen could have hoped for this season, the Mexican playing the wingman role to perfection, and also declaring he believes the Dutchman is the best driver in Formula 1 right now.

Perez didn’t have an easy season in 2021, with the former Racing Point driver getting comfortable at Red Bull, as the team and Max Verstappen fought Mercedes and Lewis Hamilton for F1 supremacy.

That put extra pressure on the Mexican to play an effective support role, who while being superb on Sunday, struggled to get on top of the RB16B’s handling in qualifying. Perez however seemed to get better in the second half of the season, with his defense on Hamilton – in an effort to hold up the Briton in Verstappen’s favour – in Turkey and Abu Dhabi being two examples of his driving skills that made him worthy of another season with the energy drinks outfit.

Perez has a tremendous benchmark with Verstappen

Perez spoke of his World Champion teammate, Verstappen, in an exclusive interview with racingnews365, praising the high level at which he operates, while describing life in the same team as the Dutchman.

“There is no other driver that is at one with the car like Max is,” Perez began. “He’s been at Red Bull for a long time, and you can see that straight away. You still see some weaknesses with other cars, with other drivers’ cars.

“But Max, the way that he’s at one with the car, I don’t think there’s anyone that compares to him in that regard. He’s really, really into it.

“He’s at a very high level, as we can see, and I think I have a tremendous benchmark with him. I see it as a very positive thing because you have a fantastic benchmark on him since FP1,” the 31-year-old admitted.

“You have a great reference to him, to lead up to great results. Ultimately, as a driver, you want to be working with the best, and I think, right now, he is the best in Formula 1.”

Pushed to say whether Verstappen is the best driver in F1, Perez quipped: “I think, if we discard [myself], yes.”

“I have to accept that,” he said as he explained how he dealt with such a strong teammate.

“As a driver, you have to be realistic and he’s at a tremendously high level. The way he drives this car is… He’s just at one [with it]. It’s years of experience with it, and he’s at a very high level,” Perez mused.

Perez then talked about the Red Bull F1 car he would be driving in 2022, his involvement in its development, and how it felt, and whether he has a chance to fight for the title.

“I think so,” he said regarding his title-fighting chances. “I think next year it’s a new opportunity to all start from zero and grow from there. I think that’s something that can be very good for me.

“[I’ve been] quite involved in next year’s [car],” Perez revealed. “We’ve done a lot of sim, we’ve done some following and [given] comments.”

As of the new car’s characteristics he said: “[There’s] less grip, [it’s] much heavier, so it’s just very different. It’s not as agile as this year’s car,” the two-time race winner concluded.

Perez finished the 2021 season fourth in the Drivers’ Standings, 36 points less than Valtteri Bottas in third.