Jeddah Takeaways: Hamilton vs Verstappen. How does it end? 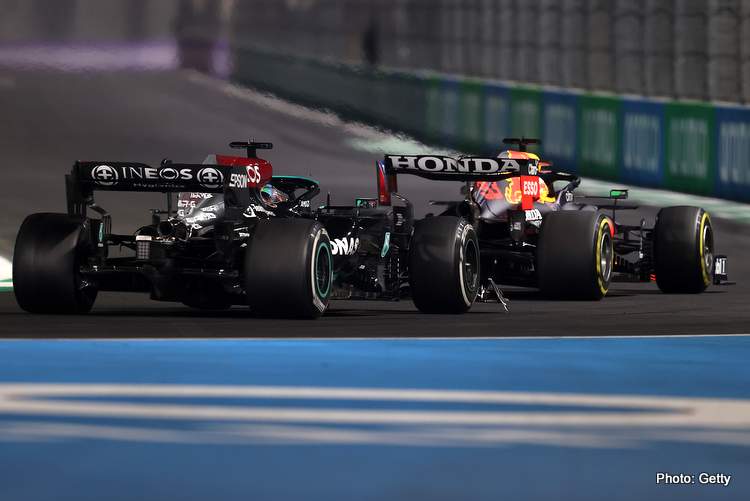 The first-ever Saudi Arabian Grand Prix was a race to remember – the penultimate chapter in this titanic battle between Lewis Hamilton and Max Verstappen – for good reasons, as well as some very bad ones.

Unfortunately, the bad ones will remain engraved in our memories, as there were enough of those to keep everyone talking for some time.

It is always exciting to head to a new Formula 1 circuit, both for the teams and the fans, with the array of unknowns it presents, and the Jeddah Corniche Circuit was no different, being dubbed the “fastest street circuit” ever to grace the F1 calendar.

Not that the 2021 season lacked any excitement as such, but having an unknown new venue thrown into the mix is always welcomed, and the new Saudi venue did not disappoint with its fast nature and walls being too close for the drivers’ comfort, punishing the slightest of mistakes, the possibility of driver and car going for a dip in the Red Sea not being too outlandish.

The circuit layout suggested a weekend of Mercedes dominance, with Friday’s practice sessions saying as much with Lewis Hamilton featuring at the sharp end of proceedings.

But come Saturday, Red Bull found a way to get their RB16B happy around Jeddah, especially in qualifying trim, and the scene was set for a dominant Max Verstappen pole until he, all too eagerly, binned it in the dying moments of Q3.

Coming into the penultimate round of the season, the two Title contenders were separated by eight points to the Dutchman’s advantage, and there was every chance that they would leave Jeddah even on points, which is exactly what happened.

There was also the slight probability that Verstappen might outscore Hamilton by 18 points and seal the Championship, but we all know that was always going to be a long shot, with some freakish circumstances intervening to make it happen.

Well, it was freakish enough after all, and we now head to the final round in Abu Dhabi where the title will be decided one way or the other, but not before we have our usual Takeaways from the 2021 Saudi Arabian Grand Prix.

Verstappen has been found wanting

If there was a race where Verstappen needed to stamp his authority, it was in Jeddah. With Hamilton being on a strong run since Brazil, the Red Bull ace had the chance to hit back, especially after the form he showed on Saturday, from FP3 and onwards through qualifying.

But then that Q3 incident happened. From the moment Verstappen brushed the wall at the start of the run, I had a feeling it wasn’t going to end well, and it didn’t.

The lap was erratic, much as it was brilliant, and what a shame it was for it to pan out the way it did, because whether you are a Verstappen fan or not, a chance to witness something really special was lost the moment that Red Bull tagged the wall.

Halfway through the lap, when Verstappen already knew he was over three tenths faster, the smart thing would have been to back off a bit, bag pole, and beat Hamilton, but you can’t change people. Max is not wired that way, and maybe that is why he is such an exciting driver.

Verstappen has been soundly beaten for the past couple of races by Hamilton, and chances are he saw that lap as a chance to demolish his rival’s confidence and regain the initiative, but it backfired spectacularly and put him on the back foot showing that Hamilton and Mercedes have got too deep into his head by now.

Further proof was his clumsy driving on Sunday, as except for his brilliant pass after the second Red flag where he sneaked past Hamilton and Ocon, he was just all over the place and too desperate, failing to capitalize on a lifeline handed to him by the first Red flag with his poor start, and his over the limit tactics to keep his position whenever he was at risk of losing it.

Verstappen has been very good in pushing the boundaries of what is accepted in F1, but on Sunday in Jeddah, he was just scrappy which resulted in him being the focus of the Stewards on the night.

This brings me to my second takeaway.

Mr Michael Masi and the Stewards

I am in no way defending what Verstappen has done during the race, and he was definitely deserving of a penalty or two, but the FIA cannot go on giving penalties left, right, and center for one party, while ignoring the transgressions of the other side.

Inconsistency was the word that has been synonymous with the Stewards’ decision-making process this year, and in Saudi Arabia it was no different.

First, why was not Hamilton penalized for the yellow flags moment in practice?

It was brief and confusing, but it was also confusing in Qatar, and Verstappen was penalized nevertheless. What of his dangerous moment with Nikita Mazepin?

Then during the race, if Verstappen was commanded to give the position back to Hamilton after cutting the chicane, why then give him the five-second time penalty? He should have been penalized after being given the benefit of the doubt he was given in Brazil, but why double penalty?

Why wasn’t Valtteri Bottas or Mercedes questioned for slowing down excessively on the way to the pits after the Mick Schumacher’s Safety Car inducing crash?

Why wasn’t Hamilton even questioned for leaving too much space behind Verstappen (more than ten cars’ lengths) on the way to the grid after the Red flag? An advantage was gained there by getting his tyres up to temperature, which evidently worked for him as he had the better launch.
What of the Turn 27 incident when Hamilton pushed Verstappen in what was clearly a juvenile way of payback?

Then comes the ten-second time penalty given to Verstappen after the race, for the incident when Hamilton rammed him from the back. As far as I am concerned, both where playing with each other at that moment trying to be smart, and it was the FIA’s fault that Hamilton wasn’t informed that he could pass.

Both drivers and teams where stretching the rulebook to its absolute limit and to be honest, Hamilton and Mercedes did it with more finesse than Red Bull and Verstappen, but a proper Stewards committee should be able to see through it and take proper consistent actions.

But they didn’t, and we also had to be treated to that ridiculous bargaining exchange between Masi and the Red Bull pit-wall regarding Verstappen’s starting position after the second Red flag.

What was that all about?!

Formula 1 should sort out the stewarding process once and for all. How? Get a fixed group of race stewards to oversee all races and hold them responsible for their actions and decisions. Simple.

How will it all end between Hamilton and Verstappen at this Sunday’s Abu Dhabi Grand Prix?

Since the chequered flag was waved on Sunday night in Jeddah, we have been served to some comment “gems” by all stakeholders, rival teams, pundits, F1 officials… you name it.

They all want the Championship to be decided by good racing on track in Abu Dhabi at the thoroughly facelifted Yas Marina Circuit.

It’s a bit too late for that isn’t it? And I am of the opinion that it will be decided in a more Senna/Prost or Schumacher/Villeneuve kind of way, especially that a DNF for both title contenders will benefit Verstappen who has nine wins to Hamilton’s eight, and the Dutchman has been displaying some Senna and Schumacher “all or nothing attitude” over the course of this season.

Honestly, regardless of how it ends, I don’t mind, as it will take nothing away from the excitement of this fantastic season we have witnessed so far, and in the end one driver will win and the other will lose irrespective of how he does it.

What I only care about is that these two great drivers, the greatest of their generations, don’t hurt each other (or worse) going at it in Abu Dhabi. Other than that, bring it on!