Hamilton: Verstappen is over the limit for sure 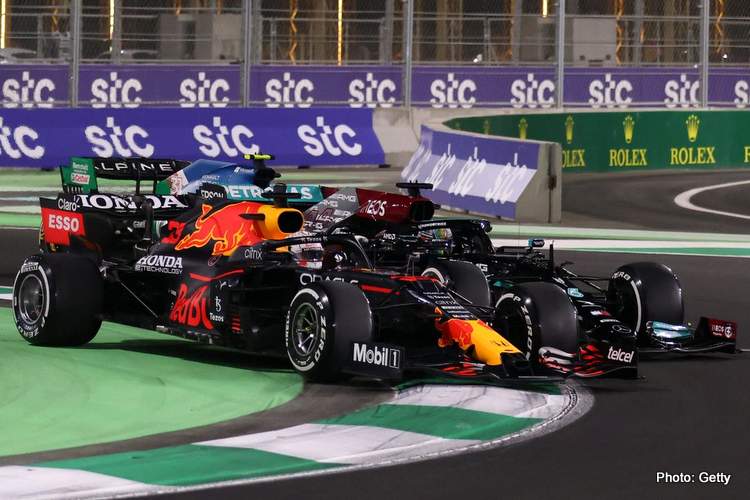 Lewis Hamilton felt like he was in a boxing match on his way to victory at the inaugural Saudi Arabian Grand Prix, and accused his title rival Max Verstappen of driving over the limit during a controversy and incident-packed race night at the all-new Jeddah Corniche Circuit.

Hamilton led from the start as the top five on the grid circulated in the same positions until Mick Schumacher’s crash on lap 10 which triggered a safety car when he banged the barriers in Turn 22. A Red flag followed.

From the standing restart, Verstappen cut across the kerbs exiting the first turn complex which made Hamilton unhappy. But not for long as Sergio Perez and Nikita Mazepin crashed as they got going again. Another Red flag.

Verstappen was stellar in the second restart, as he darted past Hamilton into the first turns, proceeding to lead the race with Hamilton in pursuit. On lap 36 of the 50, the Mercedes driver began his attack.

A lap later he got beside Verstappen into Turn 1, the Black car edging ahead but the Blue car would not yield and pushed the Mercedes wide Brazil-style. It was below the belt. The race stewards agreed, handing out a five-second penalty to the #33 car.

That was just dangerous driving. This guy is crazy man!

What followed was bizarre gamesmanship as Verstappen was told to hand back the position, he hit the brakes with Hamilton on his gearbox, resulting in a collision between the pair as the Mercedes rammed the rear of the Red Bull with its front wing, breaking it on impact.

Max took his time to finally relinquish the lead on lap 44, to Hamilton, who was unimpressed accusing his younger rival of “brake-testing” him and fumed over the radio: “That was just dangerous driving. This guy is crazy man!”

Ultimately the damaged wing had no big effect on the Merc, once he got past Verstappen he was untouchable as he was in Qatar and Brazil, going on to win comfortably on a night that Red Bull all but imploded.

Hamilton, no angel himself, but more subtle and cunning on the night, was lucky to survive unscathed as he had far more to lose than Verstappen did on the night, a DNF would have killed his eighth Title ambitions.

Lewis said afterwards: “He was trying to let me past, which l guess is what he had been asked to do, but before the DRS zone so that he would then DRS back past me into Turn 1. So that was the tactic. But the worst part was the steep, heavy braking which happened. That was the dangerous part.”

The stewards agreed yet again, handing Verstappen a 10-second time penalty after the race.

I was just trying to do my talking on the track

The reigning F1 World Champion said after his 103rd Grand Prix victory: “For me, I had to keep my cool out there which was difficult to do. I’ve been racing for 28 years and come across a lot of different characters. There are a few of them that are over the limit, rules do not apply or they don’t think of the rules.

“I was just trying to do my talking on the track. There were so many crazy curveballs then he brake tested me to get the DRS and overtake me again into Turn 1.

“He is over the limit for sure. I’ve avoided collisions on so many occasions with this guy and I don’t mind doing that as you live to survive another day.

“I didn’t get the information [Verstappen was letting him through] so it was very confusing and was he trying to play some crazy tactic? Then he hit the brakes so hard and I nearly went up the back of him.

“For him, it does not matter if we both don’t finish but for me, we both need to finish. I’m personally chilled. I feel like I’m in the boxing ring and I’m ready to go,” declared Hamilton who is now tied on points with Verstappen with only the Abu Dhabi finale to go next weekend.