Verstappen: Sunday is the important day 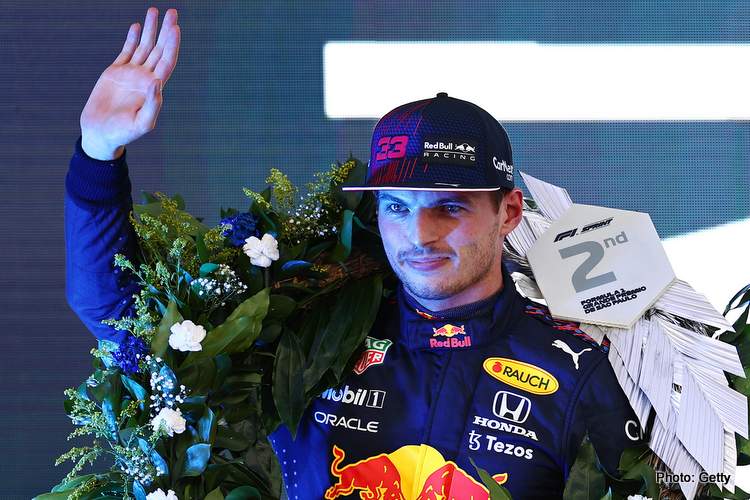 After inheriting the top spot start for the 2021 Sao Paulo Grand Prix Sprint, most expected Max Verstappen to power into the distance on Saturday afternoon at Interlagos, but he did not.

Instead, after inheriting pole for the Sprint from DQed Lewis Hamilton, Verstappen finished second to Valtteri Bottas who stole victory with a great start from second on the grid, the soft Pirelli’s doing a better job on the Mercedes than the mediums which Verstappen had bolted on his Red Bull.

Tucking in behind Bottas as they exited Turn 1, Verstappen stalked the Finn throughout the race. A late charge came as the leaders were within DRS but the Red Bull unexpectedly had no answer and a final lap attack never came from Max.

Speaking after the 24-lap race, Verstappen explained why he could not challenge Bottas: “The tyres just very quickly overheat and you are stuck – especially when the cars are closely matched on pace: there’s not much you can do in the sprint without a pitstop. So, I just sat behind basically.

“The start itself wasn’t the best and then we were on the harder compound, that didn’t help. I think the pace was quite good but around here once you close up you can’t really pass. But it’s ok,” said The Red Bull driver.

Hamilton certainly did not get the “you can’t pass” memo as he powered from last on the grid to fifth, but will drop to tenth due to PU grid penalties and will be going all out to minimise the damage, as Max is now a further two points ahead, the gap 21, with four rounds remaining.

Verstappen: I saw Valtteri was on the softs I knew it would be quite tricky

It’s ironic that six days earlier Verstappen had out-dragged Bottas (and Hamilton for that matter) into Turn 1 in Mexico, a move that ultimately won him the race. This time around it was quite the opposite, illustrating how tiny the margins are in this seesaw season.

Verstappen knew what he was up against the moment they removed the tyre blankets: “We started on the harder compound and when I saw Valtteri was on the softs I knew it would be quite tricky to keep position, especially in these colder track temperatures.

“After the first lap we had good pace but it’s hard to overtake here and the tyres overheat a lot so there’s not much you can do so I ended up sitting behind. At the end of the day I always try to do the best I can and it was good to score a few points today.”

But the big points are in the Grand Prix. Verstappen will start second and has the comfort of knowing that simply finishing ahead of Hamilton will inflict damage but no doubt victory on Sunday is the only thing on his mind.

“[Sunday] is the important day and it will be different when we have more options with pit strategies. Let’s see what happens tomorrow, it’s going to be quite a bit warmer so hopefully, that will be better for us but it’s difficult to say at the moment,” concluded Verstappen.

Perez: I thought I was going to get past Carlos Sainz quite easily

In the other car, Sergio Perez finished fourth, like Verstappen on Bottas, Perez got close to Carlos Sainz in their battle for third, but the Red Bull couple not get past the Ferrari even with DRS.

Perez said as much in the team report: “It was difficult to get past Carlos Sainz, I thought I was going to get him quite easily, but I couldn’t get the exit right in the final corner and that effected my ability to pass him. We were expecting to hold them back at the start but that wasn’t the case in the end.

“The main issue I was having today was that Sainz was always getting a good exit out of the final corner while my tyres were overheating. The straight-line speed of the Ferrari was quite strong too. Tomorrow is the race that matters, there is still a lot to play for and we can take more risks than today.

“I could have made up that position today but it would have involved taking too many risks, more than I would like. I would like to move forwards in the race tomorrow, we will be pushing from the start and try to make the progress we want.

“It’s important to have a good starting position tomorrow and then work from there, I hope I can get through the Ferrari quickly and have good pace from lap one. We will learn from what we have done today and be stronger,” added Perez.

🗣 “Tomorrow is the important day and it will be different when we have more options with pit strategies – let’s see what happens.” @Max33Verstappen on #BrazilGP Saturday 🇧🇷 pic.twitter.com/D0PBDZEsTT