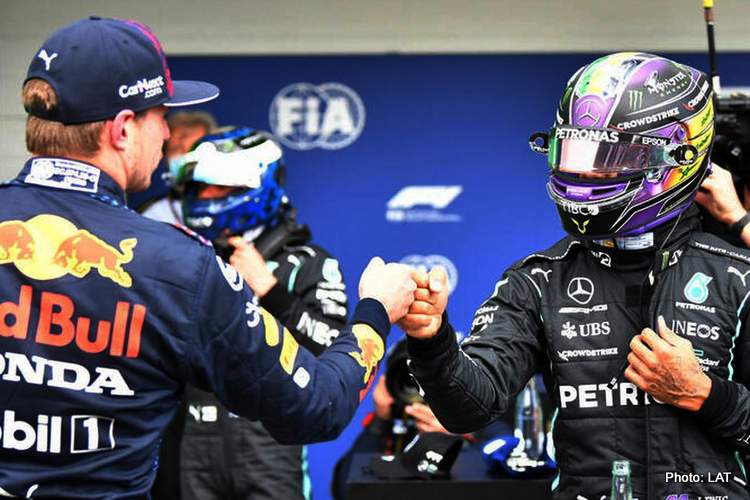 After a marathon wait for news about the two matters, hours before the start of the 2021 Sao Paulo Brazilian Grand Prix, Stewards delivered the verdict.

Hamilton’s DQ is a huge blow for his eighth title ambitions as it means he will start the sprint race from the pit lane, and then for the race on Sunday still face a five-place grid drop for a new Internal Combustion Engine.

It has been a long Saturday in Sao Paulo with both title contenders under investigation by the stewards, as Hamilton’s car failed the post-qualifying FIA scrutineering due to an irregularity with the DRS system on the Mercedes.

The Stewards reported: “In lay terms, there is a gap between the upper and lower parts of the rear wing. When the DRS is not activated this gap must be between 10mm and 15mm. The car passed this part of the test.

“When DRS is activated, which raises the upper element of the wing to a flatter position, the gap must be between 10mm and 85mm. The maximum gap is measured, in accordance with TD/011-19, by pushing an 85mm gauge against the gap with a maximum load of 10N (ten newtons.) If the gauge goes through then the car has failed the test.

“In this case, the gauge would not pass through at the inner section of the wing, but did at the outer section of the wing. This test was repeated four times with two different gauges, once being done in the presence of the Stewards and representatives of the Competitor.”

The Team will not be appealing Lewis’ disqualification from Quali.

We want to win these World Championships on the race track. 💪 pic.twitter.com/12rD4EoDYP

Verstappen will have sighed with relief as the stewards’ verdict is no more than a slap on the wrist for the driver leading the 2021 Formula 1 Drivers’ Standings by 19 points.

Earlier today, Red Bull Christian Horner told F1’s Official Website that he would be “amazed” if his driver received a penalty.

“We’re waiting, I think as everybody is, to see what the outcome is, but I’d be amazed if it was [a penalty for Verstappen],” Horner said.

“As I said, there’s so many precedents – it’s become standard practice for drivers. If you were to look at every incident, where would you draw the line? Even a driver hugging his mechanics, you know, where do you draw the line on that?”

The Briton said that what Verstappen did has become a recent habit of many other drivers “I think as we’ve seen with many, many drivers, they sometimes have a look around to see what’s going on with other cars so that’s all it was – a bit of inquisitiveness but nothing more.

“We’ve seen it with drivers pulling our clutch paddles, we’ve had heads in cockpits, we’ve had front wings tested, cars pushed, cars rolled around, so it’s not something that is unusual. It’s never been brought up or even discussed previously.”

As for Mercedes’ ongoing DRS-related investigation, Horner said: “Well, the car has been reported to the stewards because it failed the test.

“And the test is quite clear. I think we all saw the video footage of the car failing the test, so I can’t see how it could then be deemed to comply with the regs,” he pointed out.

“So, it’s fairly binary: it’s either in or out,” Horner insisted. “I remember back to [2014] we had an issue with the front wing, it failed the test, we were kicked out, and had to start at the back of the grid.

“You had the right to appeal it of course as a team; we chose not to on the day but still,” the team boss concluded.

Verstappen leads Hamilton by 19 points in the Drivers’ Standings, The Dutchman will start from pole in the sprint race, with the Briton starting from the back.