FP2 for the 2021 Sao Paulo Grand Prix began with the final ruling on Lewis Hamilton and Max Verstappen’s investigations yet to be announced, with Fernando Alonso ending up fastest in the unrepresentative practice session.

By the time FP2 was scheduled to start, the Formula 1 paddock was scrambling to find out the outcome from the Hamilton/Verstappen saga with the FIA, each for his own reason.

Hamilton was on pole in qualifying for the sprint race yesterday, only for his car to fail the post-session FIA inspection due to a DRS system infringement, which resulted in the seven-time World Champion and his team being summoned to the stewards.

Verstappen, however, earned his stewards’ visit for pulling an “Inspector Seb” on his rival’s Mercedes and failing miserably at it, as he was caught fiddling with the W12’s rear wing.

Running in FP2 was focused on race simulations for the sprint race, as well as for Sunday’s race, which means that reading too much into the registered times would be a futile exercise.

His outright pace in the Alpine may not have been genuine but Fernando Alonso had his 15 minutes of fame as he ended the second practice session fastest of all with a time of 1:11.238.

Topped a session for the first time since 2017, you say? 😉#BrazilGP 🇧🇷 #F1 pic.twitter.com/qNa3xjDMUE

Max Verstappen, who is yet to know the outcome of his investigation by the stewards, was second 0.864s off the pace of the Spaniard.

Third went to Valtteri Bottas, who was 0.253s further down on the Dutchman, and was followed by Esteban Ocon in the second Alpine who was 1.169s off his teammate’s top time.

Reigning Champion Lewis Hamilton was fifth 1.5s off the pace, but the real worry for the Briton is whether he will get a penalty for the DRS irregularity on his car, which might decide where he starts the sprint race.

Sergio Perez was sixth, one and a half tenth down on Hamilton, with Alfa Romeo’s Antonio Giovinazzi seventh and 1.759s off the benchmark time.

The Ferrari duo, Carlos Sainz and Charles Leclerc, were eighth and ninth respectively separated by 0.021s.

Kimi Raikkonen was the last of the top 10 cars over 2 seconds off the pace.

The sprint race will be held, three and a half hours from the conclusion of FP2, with speculations still rife regarding the fate of the two “investigated” title contenders. (Follow me on Twitter @MallakJad) 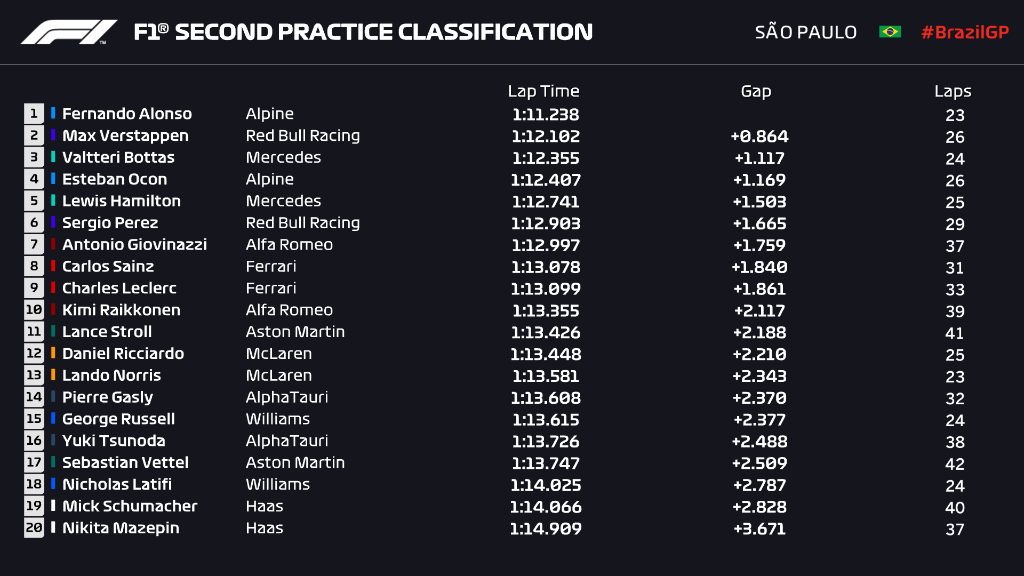