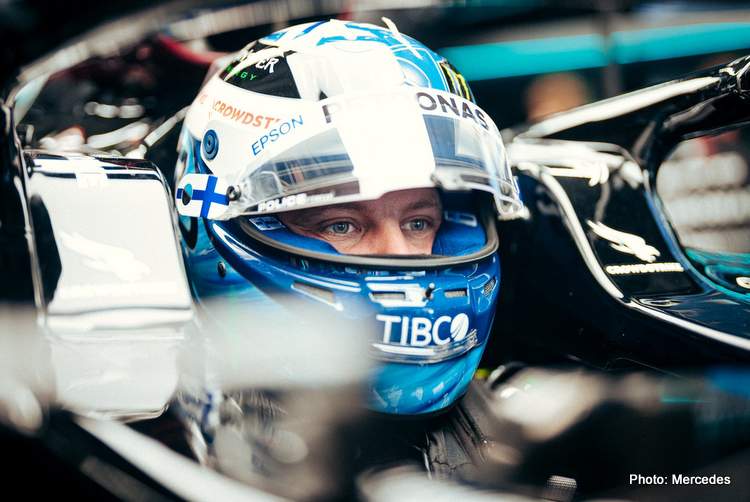 Mercedes driver Valtteri Bottas will have a new engine fitted to his W12, dropping him to 17th on the starting grid for the 2021 Russian Grand Prix  at Sochi.

The news was announced on Sunday, that the world champion team have decided to give Bottas a fresh engine for the race at Sochi for “tactical” reasons. This will drop the Finn from seventh on the grid to 17th, but crucially ahead of Max Verstappen, who is fighting for the drivers’ championship with the other Mercedes driver, Lewis Hamilton.

Bottas who had started his this weekend strongly, qualified a disappointing seventh in a wet and unpredictable qualifying on Saturday. It was a disappointing result given the pace Bottas has shown around Sochi which is considered to be one of his favorite tracks.

Bottas said: “Q1 and Q2 were going well, we seemed to be strong in the Inter conditions but in the end when it started to dry, we came in and obviously we were hopeful to get two timed laps.”

But the fact remains, the Mercedes dropped the ball in Q3, and not switching to the dry soft tyres on time, consequently making their drivers run their final hot laps on cold tyres.

“In the end, we only got one and couldn’t get the tyres to work in one lap, it was too difficult to get the temperature into them,” Bottas explained. “All the cars ahead of us got at least two laps and that was the issue.

“It’s not great but nowhere near over yet, we have a strong car and I’ve had strong pace all weekend. At least I’m not starting from the back like in Monza so hopefully we’ll be better and I can push on from P7,” he concluded.

Well, now Bottas will be starting his 94th race with Mercedes in 17th place on the grid, hoping for a good result while maybe making things a bit difficult for Verstappen. Hamilton starts fourth.

UPDATE: @ValtteriBottas will start the #RussianGP from P17 after taking his fifth Power Unit of the season.

The Team has taken the tactical opportunity to add another PU into VB’s pool for the remainder of the season. pic.twitter.com/XEcq2ES6Fv