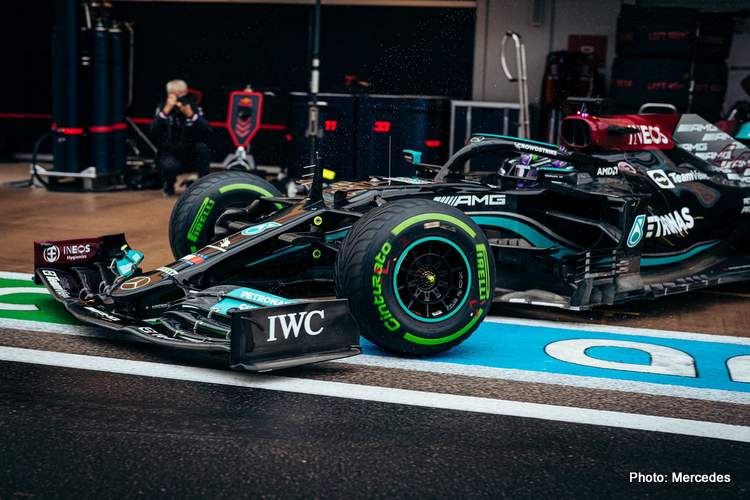 Mercedes’ Lewis Hamilton said he was disappointed after his underwhelming performance during qualifying, for the 2021 Russian Grand Prix where he finished only fourth.

With Verstappen incurring a three-place grid penalty for being deemed guilty for the pair’s crash in Monza last time out and later being relegated to the back of the grid for taking a new power unit, one in excess of his season’s allocation, Hamilton had a golden opportunity to maximize on his rival’s misfortunes to pull out a gap in the championship standings, during a season contested with the finest of margins.

The fact that Mercedes have always fared well at the Russian venue, winning all seven races held there, should have extra motivation for the Briton to shift the power balance in his favour in the championship fight.

Alas, it was not meant to be, with Hamilton failing to go any higher than fourth after he struggled to put enough heat into his soft tyres on his second Q3 run, spinning in the process, after previously surviving a brush with the pitman entry walls wiping out the front wing on his W12.

That unfortunate sequence of events left the Mercedes ace in a frustrated fourth place on the grid for tomorrow’s race.

“I made a mistake in the pit lane and I’m incredibly disappointed with that,” Hamilton said. “Up until then, I was in the groove, I was in the zone and I am really sorry for all the team that are here and back at the factory because obviously that’s not what you expect from a champion.

“It is what it is, and I’ll do my best tomorrow to try and rectify it. At the end, it was so slippery when you don’t have any temperature and without the time for that second push lap, we couldn’t set the time of the guys ahead.”

Hamilton expressed his concern regarding his chances to catch the drivers ahead, he said: “Those cars up front have got good pace and it definitely won’t be easy tomorrow. I’m just going to say my prayers and hope that our car can be fixed to be OK for tomorrow.

“These things are sent to try us, and as much as I feel terrible right now, I’ll turn it into a positive and try to do the best we can. But we’ve got a Brit on pole which is great, so congrats to Lando,” concluded a philosophical Hamilton, while acknowledging the huge achievement of his compatriot Lando Norris, who achieved his first-ever pole position on the day.

With his star driver rightly gutted for not maximizing his chances on the day, Mercedes team boss Toto Wolff tried to ease the pain implying that the team did everything right, but the conditions just didn’t play along.

“There are situations like today that are just really unfortunate,” said Wolff. “You can’t point to a mistake today – we were the first cars out in the session and found ourselves in a sequence where either we would have aborted our last two runs on the Intermediate tyre to get two Soft runs in or play it safe by finishing the lap, which is what we did.

“If you could turn back time, you’d maybe not go out first and wait a minute later but then you’re into crystal ball reading,” mused the Austrian.

Wolff went on to exonerate Hamilton from his pit entry moment, he said: “Even without Lewis’ kiss on the wall we wouldn’t have been able to do two laps on the Soft and it was definitely a lap two tyre today.

“With the second lap, I’m sure we would have been fast enough for the front row but with one lap, you have no chance of heating the tyre enough. Now we need to turn it around tomorrow, these things sometimes go against you but the important thing is how you react.

“Lewis is still in the hunt for the win, that’s the target and Valtteri can go on the attack from P7, he’s looked very strong all weekend,” concluded Wolff.

Hamilton will start tomorrow race, still chasing that elusive 100th race victory, his last win at Silverstone back in July.

It was a messy end to Q3 for @LewisHamilton

A tangle with the pit wall led to a race against time for his second flying lap, which ended with a bit of a spin 👀#RussianGP #F1 pic.twitter.com/PaSUmxHDNs