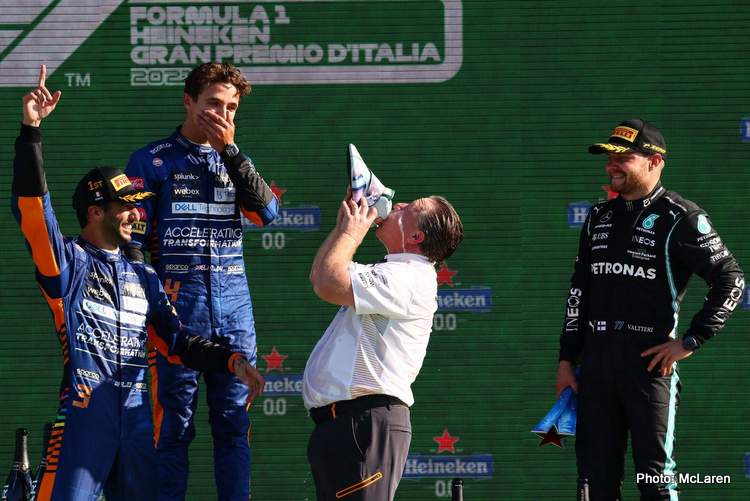 With Max Verstappen dominating last week’s race in Zandvoort, the 2021 Italian Grand Prix was Lewis Hamilton’s perfect chance to bounce back with his W12 sure to shine on the Monza straights.

Sadly for Hamilton, it wasn’t meant to be. But let’s be honest here, the reigning champion was never on his A-game all weekend. Being out-qualified by teammate Valtteri Bottas on Friday, and then fluffing his start in Saturday’s Sprint Race meant that Hamilton entered Sunday’s race on the back foot while his title contender inherited Bottas’ pole position due to the Finn’s engine-related penalty, on top of increasing his championship lead to five points after scoring two points as a result of his second place in the sprint.

Sunday’s race saw the drama (we’ve used this word quite some times this season, and counting…) reach unprecedented levels, with the two title contenders stumbling on top of each other ending both their races. Definitely more on that later…

McLaren as a result owned the day with a surprise 1-2 for the Woking outfit, on a day when they did their homework, and capitalized on all the opportunities offered to them by the Gods of motorsports.

As such McLaren and its drivers, Daniel Ricciardo and Lando Norris earned their top spot as the first of our usual Five Takeaways from the 2021 Italian Grand Prix.

Papaya shines in the Red Zone!

McLaren got so close to their first race win in “Papaya” last year at Monza, when their driver at the time Carlos Sainz, found himself fighting for victory with eventual race winner in 2020, AlphaTauri’s Pierre Gasly. Where Sainz failed to win, Ricciardo succeeded albeit one year later.

McLaren have been on an upward trajectory for the last couple of years, with the team starting to reap the benefits of the structure and strategy laid down by CEO Zak Brown and team boss Andreas Seidl. It was great to have this team back in the winning circle.

The win came as a result of many mitigating factors. Not to take anything away from the team and the drivers; their car has been top of the midfield from the start of this season, and seemed quite handy at the Italian venue. Lando Norris has been on a brilliant run of results showing speed and consistency all season. During this race, he was on top of his game and acted maturely when asked by his team to hold station to secure the 1-2 for the team. Kudos for him!

Ricciardo on the other hand had been – to be brutally honest – the disappointment of the 2021 season, as he was comprehensively and unexpectedly trounced by his teammate.

The Aussie however seemed to have gained some ground in the last couple of races, as he qualified only 0.006s behind Norris on Friday, and then beat him in the sprint race, to line up second on the Sunday after Bottas’s penalty. He then went on to make the move of the race by overtaking Verstappen on the opening lap, and sustaining pressure from his previous teammate up until the Dutchman crashed out of the race.

He then survived the safety car restart and led his teammate home to achieve a much-needed result for him and his team.

Although Ricciardo’s pass on lap one can be credited for his win, Red Bull’s messy race execution (Mercedes weren’t any better), and Verstappen’s crash with Hamilton meant that Ricciardo was relieved from the extreme pressure he would have endured during the second phase of the race. However, these things are all part of motorsport.

Yet I am conflicted to consider Ricciardo is out of the woods after this Italian Grand Prix performance. He has shown some flashes of speed earlier on in the season before falling short again.

The result in Italy will be a great boost of confidence for him, but he needs to consistently deliver this level of performance before we can consider that he has returned to his old form, at Red Bull though and not Renault.

But overall, McLaren as a team deserved and earned this result.

The elephant in the room

Although it was a dream result for McLaren, the real story that surely took all the spotlight after the race was the incident between Max Verstappen and Lewis Hamilton.

It was a “here we go again” moment to be honest. As soon as everyone started to move on from their Silverstone saga, these two served us with another antique of an incident. The worst thing is that there is no race next weekend, and with no real news, we now have to read and listen to countless useless comments in the media and on social media with all sorts of crazy conspiracy theories on the loose; all of which will serve to stir things up even more, when logic and reason should prevail.

The fact of the matter is that this was another racing incident conceived when Red Bull decided to forget how to change tyres fast (not to forget Mercedes’ sluggish stop), thus initializing the sequence of unfortunate events that followed.

This incident is a mirror image of the one at Silverstone. This means: it takes two to tango with Max this time being the heavy-footed dancing partner.

Yes; Lewis didn’t give enough space after turn one, but Max should’ve known it was always going to be a long shot and aborted the move. He didn’t and both were out this time, and we are all fortunate Lewis wasn’t seriously injured by the Red Bull’s tyre landing on his head.

Now handing Verstappen with the third-place grid penalty for Russia is a debatable issue. The effect of Hamilton’s penalty in Silverstone was neutralized by his pace and superior car.

Verstappen’s penalty seems in line with the ones handed out to Valtteri Bottas and Lance Stroll for their shenanigans in Hungary. Both were out of the race as well. It remains to be seen if the Red Bull ace can overcome his penalty like his title rival did.

Fair or not fair is debatable, but at least there is some consistency there.

As part of this race weekend, we have been treated to another bore-fest in the form of the Sprint Race trial on Saturday. Trying it again will neither make it exciting nor right. It is still a mundane spectacle that undermines the core of F1.

You would have thought that someone like Ross Brawn, with the legacy he has in F1, would know better than condoning ludicrous ideas like this, and not to mention the reverse grid idea that was mentioned several times before.

If the racing lacks excitement, the Sprint Race won’t fix the problem. So they are better off looking at a solution somewhere else and leave the race weekend format in peace. It is still more exciting to watch the real qualifying session with all drivers trying to nail that perfect lap in one or two shots only.

With the 2022 aero rules being touted – by Brawn and Co – as the silver bullet that will sort out the cars’ inability to follow and thus enable closer racing, you can’t help but worry if those new regulations (coming from the same people behind the sprint races concept…) will actually deliver the promised results.

For the sake of our beloved sport, we sure hope they do…

In the post race interview on Sky Sports, former F1 world champion Damon Hill asked Mercedes team boss Toto Wolff if they had entertained the idea that Red Bull and Max Verstappen might take out Lewis Hamilton on purpose so as to maintain the 5-points advantage Max had on Lewis.

The 1996 champion was later quoted by Sky: “Looking at the replay of Max on Lewis, there was no way he was going to make that work,”.

Standard stuff up to now, but then Hill drops the bomb saying: “The only conclusion is he might have been thinking ‘I have to take him out’. I don’t want to think that of any driver, but I think it was either an error of judgement or a calculated move to collide with Lewis.

“It is strong and I don’t like the idea that I’m accusing anyone of doing that, but he’s got a points advantage and this was a race which Mercedes was supposed to win.”

For a person of Damon’s calibre and status to say something like this is way out of line. Without being dragged into accusations that he was defending his compatriot who was undone by this incident, such a statement is offensive not only to Max and Red Bull, but to the sport and everyone involved in it, regardless of who was involved in the incident itself.

We should feel privileged that we are witnessing two of the sports’ titans slugging it out on track in what seems to be one of the most exciting seasons in F1 history. While mistakes and incidents will happen when two drivers are fighting in such close proximity, we should instead be grateful that we are in an ultra-safe era of F1, and that both drivers are safe up to now, and will hopefully remain so.

When such moments/incidents occur, reason, logic, and fairness must prevail especially by the sports’ veteran personalities, of which world champion Hill is one. Tarnishing the sport and its drivers with such statements is unwarranted, to say the least.

Still on the aforementioned matter of safety, we have to give credit again, to the real star of the 2021 Italian Grand Prix which is the Halo device.

The repercussions of the Hamilton/Verstappen crash would have been unthinkable had the RB16B’s tyre landed directly on Lewis’s helmet, without the Halo taking the grunt of the impact.

This incident would have definitely yielded a totally different, and perhaps a tragic outcome in another era of F1.

Massive congratulations to Lewis on his safety as we look forward to the next round between him and Max in Russia in a fortnight.

Glad the Halo was there 🙏 #F1 #ItalianGP 🇮🇹 pic.twitter.com/VmYiIUhyRa