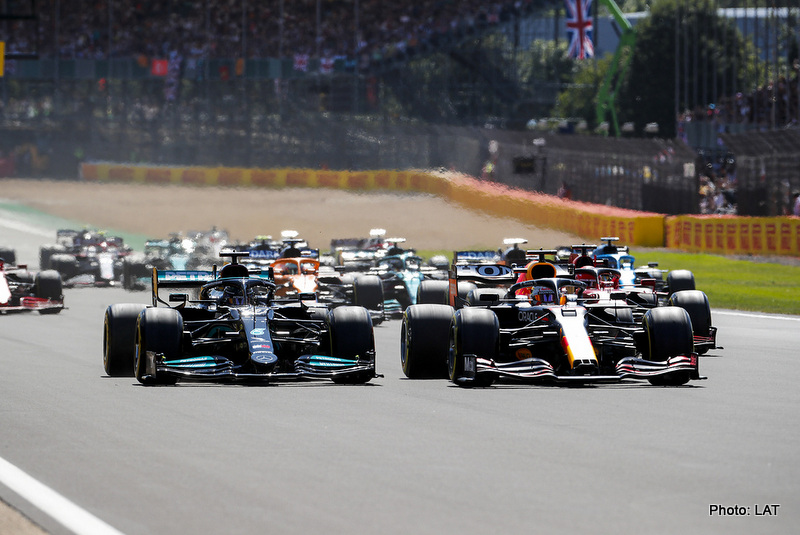 After the Austrian Grand Prix a fortnight ago, Formula 1 was back in action for the 2021 British Grand Prix at Silverstone.

This year’s British Grand Prix was always going to be special with fans being allowed in full capacity, and with the trials of the first sprint-qualifying race – or whatever you want to call it – for the first time.

Mercedes came back with the will to make amends after the triple-pounding they received from Red Bull in the previous triple-header. They brought an updated car to this event, and Lewis Hamilton was always going to be pumped up for his home race, especially with the crowds being there after a long absence.

Well, having the crowds there was definitely a sight for sore eyes, and hearing them cheer and interact with the racing action was something we all missed.

The race turned out to be an even more interesting event for reasons that no one would’ve imagined, prompting our usual five takeaways from the 2021 British Grand Prix.

Well let’s not hide behind our fingers here, but at one point in this season, something like this was bound to happen.

Verstappen has been running on a high for the past three races, and Hamilton and Mercedes have, well let’s just say, not been gracious in defeat (bendy wings and all considered). But hey, with a championship so close, all is fair in love and war; right?

Silverstone was always a happy hunting ground for Hamilton and Mercedes for a while now. Remember, he even won on three wheels before, and the feeling was that they were intent on keeping things that way.

Topping qualifying on Friday was a clear signal of intent, but Verstappen, in the rapid RB16B, put a spanner in the works for Hamilton after beating him in the Saturday sprint race.

As soon as the lights went out on Sunday, it was evident from the first couple of corners that the tussle between the title contenders wouldn’t end well.

Verstappen, with pure aggression, has beaten Hamilton in wheel-to-wheel fights this year on a few occasions, and there was no way the seven-time world champion was going to accommodate that, well at least not in front of his home crowd.

Now, so much has been said about the Copse incident since yesterday, but with the luxury of writing these words the morning after, one can have the chance of looking at it with a cooler head.

Hard racing, and heated rivalries is what we all want in F1. And that was what Verstappen and Hamilton were doing. They have properly judged their fights up to now, but in one of the fastest corners in the championship (as Christian Horner described it), both drivers decided to throw caution into the wind, and their egos took center stage instead.

Now Hamilton was overly optimistic if not desperate to make such a move stick with a driver like Verstappen, known not to yield. Surely that on another occasion, Hamilton would have backed out of it, but this time he didn’t with adrenaline pumping to the Max (pun intended) in front of his home crowd and clearly knowing the race would be lost had he not been leading the race through Copse.

Verstappen got off worse of course and was lucky to get out of the car unscathed. Hamilton was lucky he didn’t get any serious damage and that the red flag period allowed him to fix his cracked wheel and most importantly calm down.

On the restart, it was clear that the seven time world champion had dialled his aggression down and drove a more calculated race for the win.

This incident has attracted a lot of heated discussions because, firstly it was between Max and Lewis, and secondly the outcome could have been uglier having occurred at such a risky corner.

Other than that, it was a racing incident. Whose fault? Well it takes two to tango with Hamilton being the heavy-footed dancing partner this time around. He got a penalty, but had the pace to neutralize its effect, with the number 33 RB16B out of the race, Sergio Perez nowhere to be seen, Bottas being such a nice boy, and an overachieving Charles Leclerc not standing a real chance of winning.

Some might argue that the penalty was not enough, but you cannot base a penalty on the consequences of the driver’s error. The penalty has to be in line with the transgression. And listening to Christian Horner, Helmut Marko, and Toto Wolff’s gems post incident is pointless, because if the roles were reversed, so will their comments. Hard racing, gone south, thank god Verstappen is safe and no one was hurt. Full stop.

If you google the word “qualifying” or “qualify” you will get the following definition:

“Be entitled to a particular benefit or privilege by fulfilling a necessary condition”.

So when a driver qualifies to start the race on pole, he has to be the driver able to pull off the fastest lap around a circuit to earn that privilege.

How does sprint qualifying ensure that? It simply doesn’t. If the fastest driver, for example, suffers car problems with no fault of his own and loses the sprint qualifying, how is it in any way fair for him? This is only one example of how unfair it may be.

Furthermore, other than a few anomalies during Saturday’s sprint, there was no significant change to the pecking order.

The fast starting Fernando Alonso benefitted, the spinning Sergio Perez didn’t. Both George Russell and Carlos Sainz were undone by their altercation during the sprint. Other than that what did the sprint add?

Okay we had an exciting Friday for a change with teams having just one hour to fine tune their cars before qualifying. Other than that, the sprint qualifying was just a wedding’s rehearsal dinner.

On another note, how does having sprint qualifying serve the purpose of cost saving that F1 has been vocal about for a while now?

Won’t those sprints require more expenditure? You have the cost of fuel, unaccounted for wear and tear on car components (mainly power unit and gear box) for which consumption is highly policed by the FIA. The list goes on.

And if a procedure is put together to keep the costs down while implementing sprint qualifying, how will the FIA control that? It would be a miracle if they can properly monitor the current cost cap they are now implementing.

Sebastian Vettel – don’t go back there!

After Monaco, and especially after Baku, Vettel seemed to be in a happier place. Although he didn’t set the world alight in the following triple header, but that can be put down to car limitations.

Things looked bright in Silverstone with the German showing some handy pace and a nice fight with Alonso during the sprint event. But then came that spin after the race restart, and most worryingly, the fact that he couldn’t recover after that being stuck in 17th for infinity.

Retiring the car just put an end to his misery. A misery which was clearly visible during his 25-second video interview on the F1 website.

We can’t assume that we know why he spun, but the most important thing is that Vettel and his team behind him make sure he doesn’t go back to the dark place he was once in. It should be a collective effort to help him rebound from this.

Every time a crash like Max’s occurs, we get to appreciate the levels of safety F1 cars have come to achieve these days. A 51G crash would have had an unthinkable outcome years ago.

I was one of the people who dreaded the addition of the Halo at start, but since then I have to admit it was a blessing and mitigated massive near misses.

Just imagine if Romain Grosjean went into the barrier head first when he had his horrendous crash in Bahrain last year. The Halo, among other safety factors, ensured that he still walks amongst us today.

F1 drivers will always be risking their lives every time they get into those cars, but the stakes are much lower these days.

So kudos for top notch safety in F1.

Leclerc deserves credit for giving Ferrari a hint of possible victory in a car that doesn’t deserve to win a race, especially on a track like Silverstone. Managing his car power unit issues with Lewis on the hunt was admirable to say the least. The ease with which Lewis caught up and passed him shows how good a job Charles was doing in that SF21 as he succeeded to keep Bottas behind.

Daniel Ricciardo seems to have taken a step closer to his teammate. Being separated by 2 thousandths of a second in qualifying and a proper performance while keeping Carlos Sainz at bay during the race are all good signs for the Aussie.

Esteban Ocon seems to be enjoying his new chassis with a much better performance and a smaller gap to his ever improving veteran teammate who gave us some proper entertainment with his race starts.