Does Giovinazzi deserve to be in F1 beyond 2020? 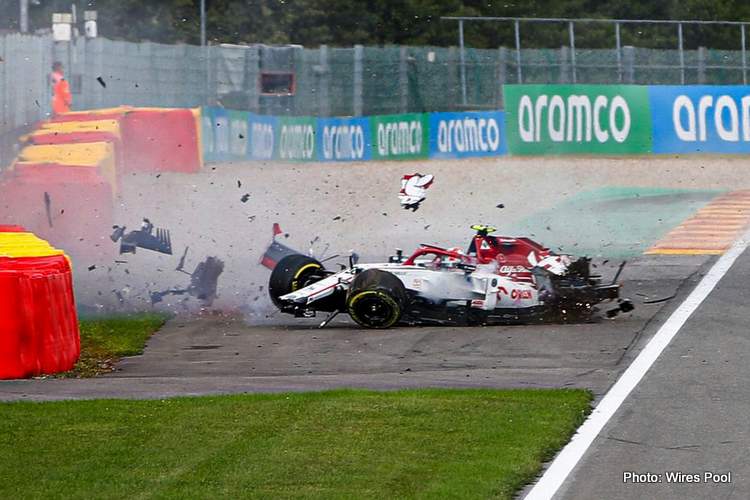 In the wake of yet another self-inflicted mistake during the 2020 Belgian Grand Prix, Antonio Giovinazzi’s career as a Formula 1 driver has taken yet another blow, again raising the question: Does he deserve to be in the top flight?

Luckily the Alfa Romeo he trashed on Sunday when he got to ambitious on the loud pedal while trying to keep his teammate Kimi Raikkonen behind during a ‘battle’ with Ferrari’s Sebastian Vettel at the wrong end of proceedings.

Speaking ahead of his home Italian Grand Prix, Antonio explained to reporters, “I knew that Sebastian was really close to me and I was trying to be on his DRS zone. This was my target and unfortunately what happened, it’s too late to see what’s wrong from my side, I was just trying to push like I always did, and unfortunately this time it went wrong but… now I just want to do well here in Monza and forget about Spa.”

Shortly before Antonio smacked the barriers at Spa last Sunday, his teammate Kimi Raikkonen was calling his pitwall to allow him to get past his teammate.

At which point the younger driver was told to up the pace, or allow his teammate through to attack Vettel – he tried the former and we all know what happened. Not only did the Italian take himself out, a loose wheel from his wrecked Alfa Romeo nearly decapitated George Russell. Another story for another time…

Kimi witnessing his teammate’s antics reported over the radio: “He’s off!” and added, “he should’ve fucking let me past.”

With a host of young talented drivers ready to burst into the top flight, it is increasingly apparent that Giovinazzi has not got what it takes to be considered one of the 20 elite drivers that deserve to be in F1.

In Mick Schumacher, Robert Schwartzman and Callum Illot, the Scuderia have an abundance of talent ready to step up and be considered, from their own in-house Ferrari Drive Academy.

Antonio, an FDA alumni, has 30 Grand Prix starts to his name, in that time fifth is the best score on his record. He made his debut at the 2017 Australian Grand Prix, a call-up to replace injured Pascal Wehrlein. On that weekend the Italian did a solid job considering the circumstances.

But two weeks later the first bout of doubt began as he crashed heavily in front of the pitlane during qualifying for the Chinese Grand Prix, and a day later wrecked his second car in 24-hours; same place same mistake.

Thereafter he missed almost two years before Ferrari put him in the Alfa Romeo, in 2019, where the 26-year-old has hardly shone, even when compared to his veteran teammate Kimi (long past his best) Antonio struggles to beat him.

Consider what Charles Leclerc  (the man he replaced at Alfa) is doing to Sebastian Vettel at Ferrari; that’s at least what Antonio should be doing to 40-year-old Kimi, who is at his slowest in two decades.

Begging the question posed in the headline: Does he deserve another crack at it next year?

He obviously believes he does and explained why, “First of all I came to Formula 1 on my own because I didn’t have any big names behind me or any big sponsors. I’m here just because of results and talent.

“I know that F1 is critical, you need to always be in good shape every race weekend and I know also that many times, in one week you can be a really bad driver, then the next week, just after a few days, you can be a hero.

“So from my side, if I can continue like I’m doing to be fast and try to score the points for the team, nobody can take my seat next year, so we’ll see what happens but I’m quite assured from what I need to do. Just be fast and be consistent,” reasoned Antonio.

Unfortunately, despite his confidence,  these are two vital elements that appear to be avoiding him on a far too regular basis.

Meanwhile, the Silly Season gossip bubbling away is that Alfa Romeo will have an all-new driver line-up next year, with Nico Hulkenberg set to be partnered by one of the FDA youngsters, with Mick Schumacher favourite to get the nod.