Mercedes: It was a very disappointing day 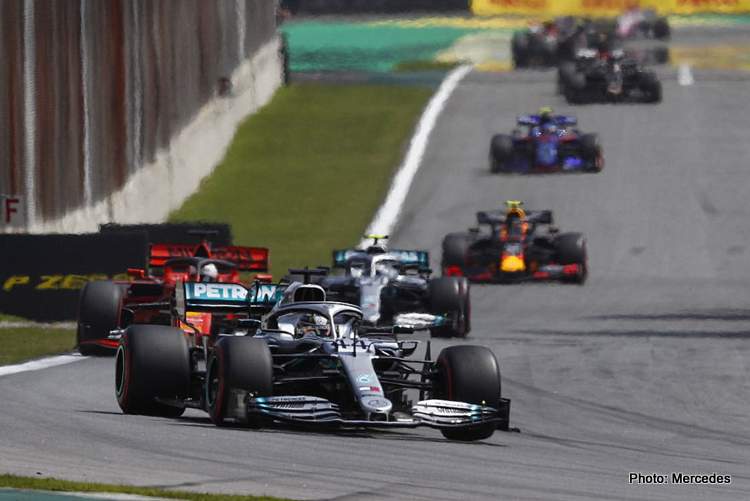 Mercedes report from the Brazilian Grand Prix, Round 20 of the 2019 Formula 1 World Championship, at Autódromo José Carlos Pace in Interlagos, Sao Paulo.

Lewis Hamilton: “It was a great race, I thoroughly enjoyed it and it was hopefully fun for people to watch, although the result is upsetting. I never want to collide with anyone, it was really unfortunate with Alex. Naturally I take it on me, it was my fault, I was coming from behind. He was doing a great job, so apologies to him.

“I gave it absolutely everything and more today, I was pushing so hard in every lap just to keep up with Max in front of me. We really didn’t have a lot of pace today and I think we were probably going faster than we should have gone. Congratulations to Red Bull, they did the better job today and deserved the win. They were extremely quick today, I was basically a sitting duck on the straights. There’s one more race to go in this season, so we will be pushing for a better result in Abu Dhabi.

Valtteri Bottas: “It was a tricky race overall, even before I had to retire the car. The pace wasn’t quite there today, so we will have to investigate that. I was aiming to do a one-stop and go to the end on the Hard tyres, but I had to pit again as we were concerned that the tyres wouldn’t last until the end.

“It’s obviously not ideal to switch strategies like that, but it didn’t really matter in the end as I didn’t finish the race. I don’t know the details yet, I just suddenly lost power, so we will have look into that and see what caused it.

“It was very disappointing especially since there was a lot happening afterwards, so it would have been nice to be a part of that action. I’m now looking forward to the race in Abu Dhabi, we want to come back strong and finish the season on a high.

James Allison: “It was a very disappointing day – a day where we made some mistakes, where we suffered very uncharacteristic unreliability on one car and turned what should have been a decent result into a DNF for Valtteri and a disappointing finish for Lewis. The simple answer is that we weren’t as quick as the Red Bulls today. We were reaching a bit in the end and we paid the price for doing something that was too optimistic – we brought in Lewis for a set of fresh tyres right at the end of the race and lost some places as a result of that and also got tangled up in an accident that was an indirect consequence of that call. Valtteri suffered from an oil consumption issue earlier on in the race and we were monitoring it, but it got worse and ended his race prematurely. Overall a very disappointing weekend for us, we want to put it behind us and move on to Abu Dhabi to put it right there and hopefully finish the season in fine style.