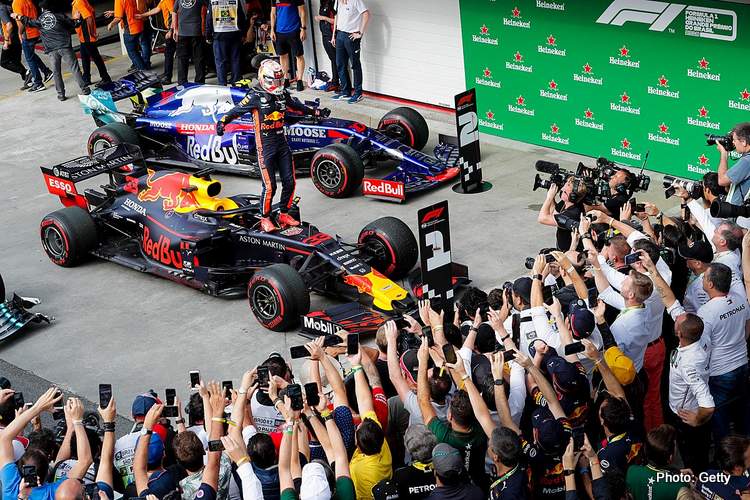 On Saturday in qualifying, Max Verstappen was supreme, today at the Brazilian Grand Prix the Red Bull driver was simply majestic as he not only beat Lewis Hamilton fair and square on an afternoon in which Ferrari imploded again.

Red Bull made a risky but inspired call to pit Verstappen during a late safety car period and the Dutchman delivering a masterclass at Interlagos, a track he clearly relishes driving on in any conditions.

It would have been a massive day for the Red Bull and Honda partnership as Verstappen led his teammate Alex Albon for what might have been a one-two until Hamilton punted the rookie out on the last lap.

The Mercedes driver simply had no answer to a feisty Verstappen who had all the ammo and answers on a day that the combo was unbeatable in a proper dogfight between the two.

But the Dutchman seemed predestined to win this one from the moment he slipped into the cockpit 24-hours earlier to claim pole position. The 22-year-old at his best is unbeatable.

Verstappen said afterwards, “Lewis was very quick so I had to keep pushing and all the time. He pitted early so we had to be on top of our pitstops we had a good move on him. I could control the race with the tyres I had it was unbelievable it was a lot of fun out there and great to win the race.”

With regards to his audacious overtake on Hamilton after the restart, the Red Bull driver explained, “I was behind so I was pushing flat out on my out lap I was close into the DRS and we knew we had great top speed the whole weekend already – but that was a guess – and I’m very happy to have got past.”

Notably, Verstappen was handed a dollop of luck when an errant Williams pit crew released Robert Kubica’s car into the path of the Red Bull, but thankfully he was not punted as he was last year…

In contrast, Hamilton had a bizarre day. At one point he looked mega and was leading briefly, but things went haywire during the safety car period where he made some crazy lunges at the Safety Car and then the most bizarre restart that backfired on him as Verstappen was got past with ease when things went green

Although the Hamilton crossed the line to finish third, appeared subdued when he emerged from his car in parc ferme.

The World Champion immediately took the blame: “Max did a great job – he was very fair the way he positioned the car. Massive apologies to Albon – the gap was there but it was completely my fault. They did a fantastic job, they outperformed us on the straights

“I raced my heart out and took a lot of risks today, as you could see. We threw every and the kitchen sink at it. We could keep up through the corners but on the straights, I don’t think there was anything we could do,” added Hamilton.

A couple of hours after the race he was handed a five-second time penalty for his waywardness which dropped him to seventh.

An all Red Bull podium was thus thwarted, but Pierre Gasly rose to the occasion and drove his best race to date in the top flight to finish second for Toro Rosso. It was his finest hour in the top flight.

Luckless Albon was classified 14th after being knocked out when a maiden podium beckoned for him before he was robbed. It might’ve been a one-two-three for the fizzy drinks brigade and their Japanese engine partner.

Delighted to be on the podium for the first time in his F1 career, the Frenchman said, “This is my first podium in F1 and for sure I will never forget it, it’s such a special moment – so emotional. Toro Rosso have given me such a fantastic car since I’ve come back. It’s an amazing day.

“I’ve been many times on the podium and you cannot forget it. This is what I love about motorsports, I was just battling giving it as much a is could, a great finish with Lewis, a big congratulations and big thanks to these guys. I’m just so happy.

“I was praying of the engine to give everything it had. Without Honda that would not have been possible,” added Gasly who did well to fend off Hamilton in the drag race to the finish line.

But, inevitably, the talking point that will linger longest was the lap 63 crash involving Ferrari drivers Charles Leclerc and Sebastian Vettel as the Ferrari pair touched and crashed out of the race in another comedy of errors in the Red camp.

It was one of those races where despite a flurry of action and big moments early on, simmered down into a stalemate until Valtteri Bottas was forced to park his Mercedes with a smoking engine and prompting a long yellow car period.

Thereafter it was a free-for-all for the strategists who had an opportunity to bolt fresh rubber on to their cars with the finish line in sight but with enough time to get it done with the softs when the field bunched up for the final shootout.

One of those to benefit from some smart thinking and top-shelf driving, starting from the back of the grid Carlos Sainz drove a remarkable race, keeping out of the numerous ‘landmines’ in the pack as he progressed to cross the line in fourth which became third after the Hamilton penalty.

It was McLaren’s first podium since the 2014 Australian Grand Prix, and also Sainz’s maiden top-three finish. Shame he did not get to celebrate it like he so deserved immediately after the race.

The Hamilton punt was a no-brainer instant penalty and should have been issued on the spot rather than the protracted affair it became – after a couple of replays it was clear for all who was in the wrong – and, of course, Hamilton was gracious in accepting blame immediately he stepped out of his cockpit.

While their Ferrari engine supplier failed to finish thanks to the shenanigans by their drivers, Alfa Romeo drivers Kimi Raikkonen and Antonio Giovinazzi benefited from the late chaos to finish fifth and sixth respectively.

Daniel Ricciardo was in the wars in his Renault but endured to finish seventh, ahead of Lando Norris in the McLaren. The rookie really impressing early on in the race as he muscled his way along with the best.

Big losers were Haas who had both their cars in the top ten in qualifying and were running strongly until it all started to go wrong. Kevin Magnussen clashed with Ricciardo and spun to finish 11th, while Grosjean got mugged at the second restart and what might have been a points finished turned into 13th.

When the lights went out at the start, Verstappen got away well and settled into P1 into the first corner. Behind him Vettel, starting from P2, came under immediate pressure from fast-starting Hamilton, who swept past through the Senna S to take P2. Behind them Bottas took up residence in P4 ahead of the second Red Bull of Albon.

The major moves in the early phase of the race were made by Leclerc. The Ferrari driver started from P14 after a PU-related 10-place grid drop before the start, but with 10 laps he was up to P6 behind Albon having stormed through the midfield.

Hamilton then sparked the first round of pit stops when he took on a new set of soft tyres on lap 20. Red Bull reacted by bringing in leader Verstappen at the end of the following lap for the same compound. Hamilton’s undercut attempt was helped when Williams unsafely released Kubica into Verstappen’s path as the Dutchman made his way to the pit exit.

The delay allowed Hamilton to fly past, but when the champion got lodged behind Leclerc in the second sector, Verstappen closed the gap. First he passed the much slower Leclerc and then with a good tow and DRS opewn he powered past Hamilton through the Senna S.

Leclerc, who had started on medium tyres, was the last of the front runners to make a pit stop, on lap 29, and when the order shook out, Verstappen once again led, three seconds ahead of Hamilton, with Vettel a further nine seconds back in third place. Bottas who had taken hard tyres during his pit stop was fourth with Albon still fifth.

Bottas has taken on hard tyres in his stop and struggled to get them working. On lap 41 Mercedes took the decision to pit the Finn for medium compound Pirellis. He rejoined in P6 behind Leclerc and Albon.

Two laps later Hamilton made his second stop, taking on medium tyres. Once again Red Bull responded and after a clean 1.9s stop, the Dutchman was released ahead of Hamilton.

Vettel now led the race, but as Verstapen closed in, Ferrari pitted the German on lap 49. The Ferrari driver took soft tyres and he rejoined in P3 behind Verstappen and Hamilton.

The race then took a twist on lap 52. Bottas suddenly slowed, and with smoke pouring from back of his car, pulled over at the side of the track.

The Safety Car was deployed and Verstappen pitted for soft tyres as did Leclerc. Hamilton, though, stayed out. The order behind the safety car was now Hamilton followed by Verstappen, with Vettel third ahead of Albon.

When the action resumed at the end of lap 59, the Red Bulls went on the attack. Verstappen passed Hamilton to retake the lead, while Albon snuck past Vettel in the Senna S to take third place.

Vettel then began to come under pressure from team-mate Leclerc, and on lap 65 the race took another dramatic turn. Leclerc passed his team-mate through the Senna S but Vettel fought back and as the pair drew alongside each other on the Reta Oposto there was contact.

Leclerc’s front right tyre punctured and then exploded, sending the Ferrari driver skidding off track in a shower of sparks as his front wing collapsed. Vettel also sustained a puncture and soon pulled over to retire. Out came the safety car once again.

This time it was Hamilton’s turn to pit and after taken on new softs he rejoined in fourth place, behind Toro Rosso’s Pierre Gasly with Versatappen now leading a Red Bull one-two as Albon rose to P2.

When the SC left the circuit at the end of lap 69, Verstappen powered away in P1. Hamilton passed Gasly and tried to attack Albon into Turn 1 but the rookie resisted.

Hamilton continued to probe and then, when Alex took a wide line into Turn 8 the champion went for the gap. Albon, though was already closing the door and he was hit by the champion and sent into a spin that dropped him to P15. Hamilton recovered but Gasly was through to P2.

Ahead, Max was now out on his own in P1 and after 71 incredibly dramatic laps he crossed the line to take his eighth career win. Behind him Gasly incredibly kept Hamilton at bay to claim P2, with just six hundredths of a second separating the pair.

Hamilton, though, was placed under investigation over the collision with Alboin and later received a five-second time penalty that dropped him to seventh place.

The penalty meant that Sainz took third for McLaren, with Räikkönen and Giovinazzi fourth and fifth respectively for Alfa Romeo.

Ricciardo was sixth for Renault ahead Hamilton and the second McLaren of Norris. Pérez finished ninth and the final point on offer went to the second Toro Rosso of Kvyat. 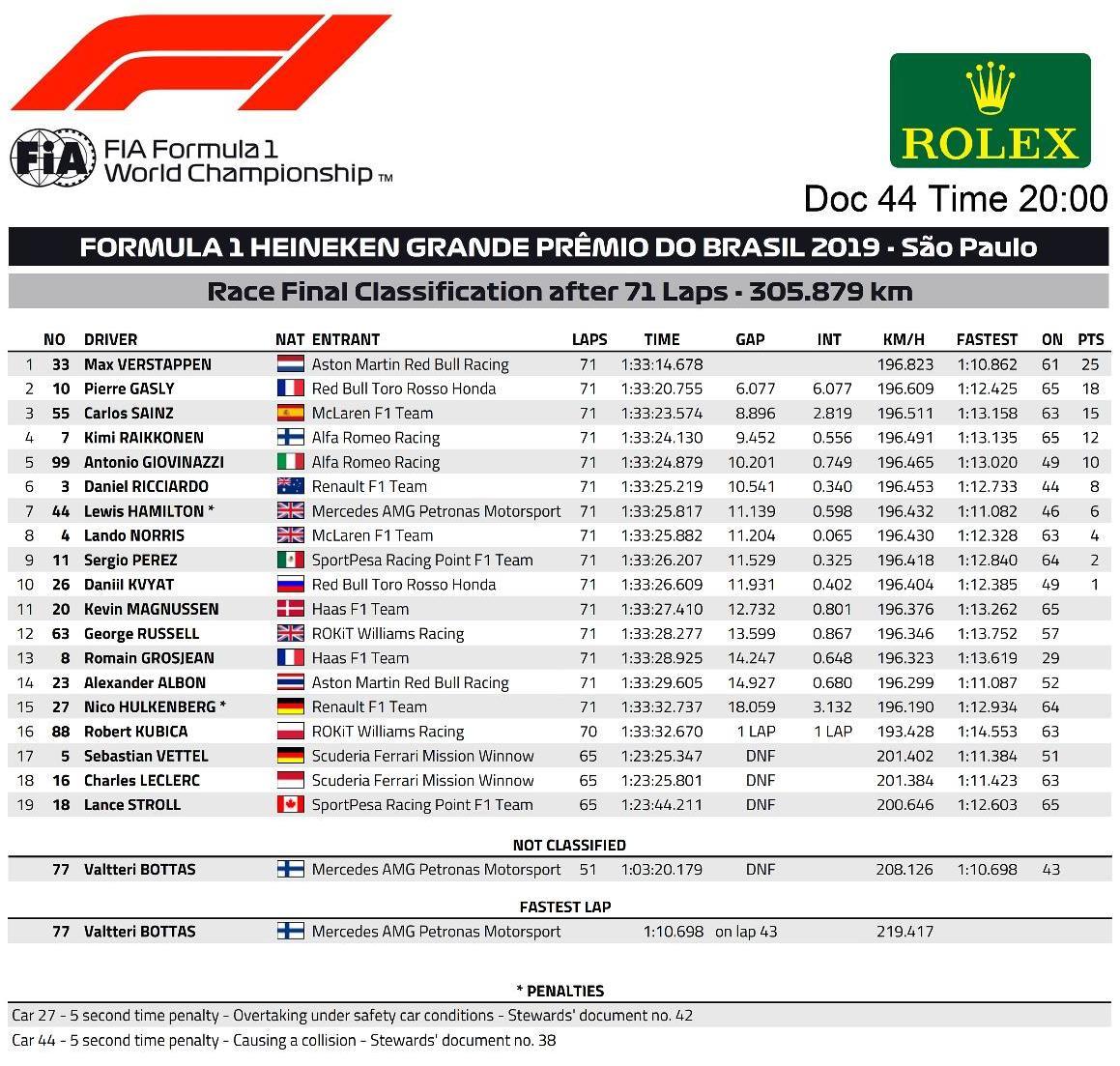