Leclerc: I can’t wait to have more battles with Verstappen 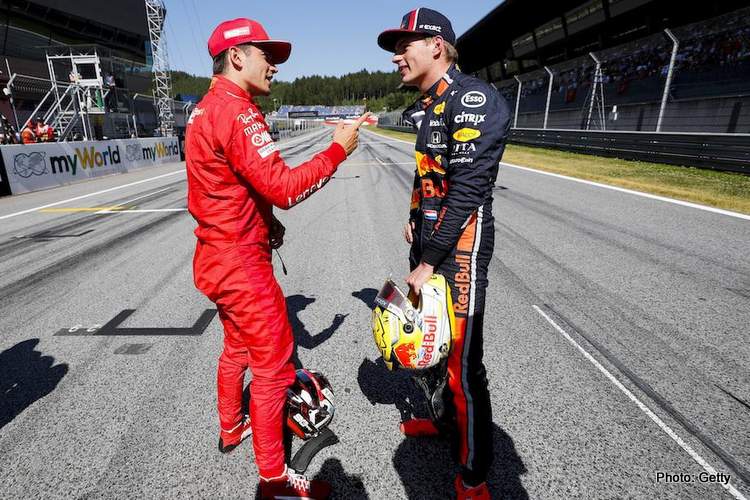 Ferrari driver Charles Leclerc has laid the foundation for what could be a very long career in the top flight, but what is certain is that the Monaco Kid will face staunch opposition from sparring partner Red Bull’s Max Verstappen.

Now the rivalry has his centre stage of Formula 1, already a couple of races this season in which Leclerc and Verstappen went wheel-to-wheel are essential viewing.

This could well be a prelude to what could be a decade long rivalry to match similar F1 feuds such as Hamilton-Rosberg, Schumacher-Alonso, Hakkinen-Schumacher, Senna-Prost.

A fact that does not escape 21-year-old Leclerc when he told BBC, “We had some very good fights in karting that didn’t always end in a good manner, but it was fun, good times.”

The fun and good times has carried over to the top flight with the pair going for it during an enthralling scrap at the Austrian Grand Prix and then a mighty slugfest at the British Grand Prix.

“I can’t wait to have more with him,” Leclerc enthused about the prospect of more such battles. “In the end, we have done most of our career together, so it is fun to find ourselves again here in Formula 1.”

Looking ahead to immediate ambitions, the Ferrari driver said, “Hopefully the first win to come very soon and many more after. But at the end the target is the first win now, trying to take the opportunity whenever we have it.

“In the future… my dream as a child was being a World Champion. Now I am finally in a team where I think this can be a reality so we need to keep working and hopefully this will happen one day.”

“It motivates me, even more, to try to progress and take that first win as quickly as possible. That’s my target. I am trying to work as hard as possible and hopefully it will come soon,” added Leclerc.

Big Question: Who is better Charles or Max?