Ferrari: We could have achieved a much better result 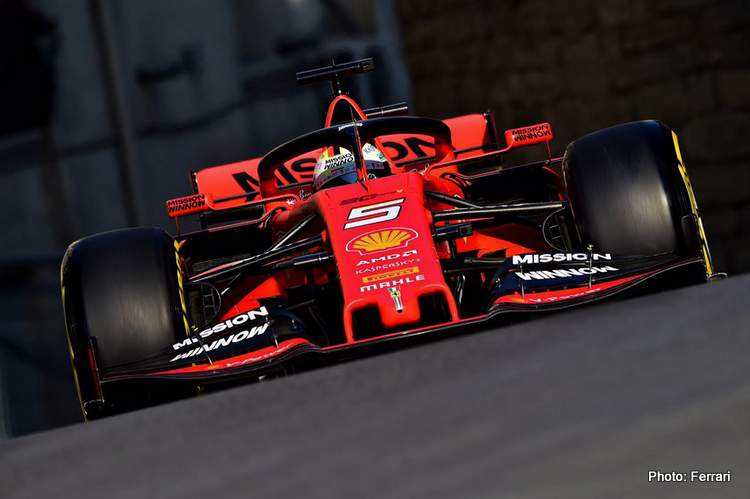 The Scuderia Ferrari Mission Winnow SF90s will start the Azerbaijan Grand Prix from the second and fifth rows of the grid, when the race starts at 16.10 (14.10 CET).

Q2: In the second session, Leclerc and Vettel went out on Medium tyres. On his first attempt, Charles did an excellent 1:41.995, while Sebastian made a slight mistake and therefore posted a 1:43.355. Charles set off for another quick lap but ended up in the wall at Turn 8, which brought out the red flags. When the session restarted, the track surface was getting progressively cooler. Sebastian went out on the Softs and did a 1:42.209 and then a 1:41.889, which was good enough to get into the top ten shoot-out for pole position.

Q3: In the final 10 minutes of qualifying, Sebastian made two runs; a 1:41.124 and then a 1:40.797 to improve in the final seconds of the session. It was good enough for him to start from third on the grid, behind a front row made up of Valtteri Bottas and Lewis Hamilton. Charles Leclerc’s car is currently being repaired by the mechanics and will line up on the ninth spot on the grid, the first of those who will start the race on the Medium tyres. In fact, the time Charles set in Q2 before crashing remained the sixth fastest overall, which is how he qualified for Q3, even though he took no part in it.

Sebastian Vettel, 3rd: “It was a tough call in the end. When the track temperature dropped the car balance changed and getting the tyres to work for that one lap, especially after such a long straight before starting the lap, was not easy.”

“With the clock ticking down, everybody was banking on the last run and getting a tow so at some point I had to make the call; do I prioritise my tyres or the tow?”

“Which would have meant compromising the outlap and I didn’t have the feeling that I could afford that and I wanted to have a clean shot. My first Q3 run was ok, but on the second run I didn’t have anybody to tow me along, so I dealt with it just focusing on my lap and obviously I lost quite a lot, about four tenths, compared to the previous lap. But that’s what happens at this track. It was a tricky session.”

“I saw Charles in the barrier and realised qualifying was over for him. It was a shame to lose one of our cars. In the end, we are one team and everybody is working extremely hard no matter which side of the garage you are on.”

“Anyway, we need to turn the page as tomorrow is a new day and it’s a long race where anything can happen. As a team we can recover and put our rivals under pressure. Overall I feel we have a strong car so we can go and race hard and should have some fun.”

Charles Leclerc, 10th: “I am disappointed with myself. Our pace was good all weekend and we expected to have a positive qualifying result. My first lap in Q2 was very good considering we were on Mediums, but then I made a driving error on the second lap.”

“I just didn’t do the job. The team and all the people supporting us out there deserved much more. Tomorrow is a new day. I will stay positive and push to do the best job possible in the race.”

Mattia Binotto Team Principal: “We are not happy about the outcome of qualifying. I think our car was performing well today and we could have certainly achieved a much better result. The upgrades we brought here worked well and we are happy with the way they are behaving.”

“Sebastian improved run after run and found the best feeling with the car right on his last attempt. This is such a peculiar track and had he found a better feeling before he could have done a better job. Charles will be one of the very few of the top ten starting on Medium tyres and he can still have a great race.”

“He was very fast today and can be very fast tomorrow as well. It has been a real shame that his qualifying ended at turn 8, but these things happen when you push to the limit.”