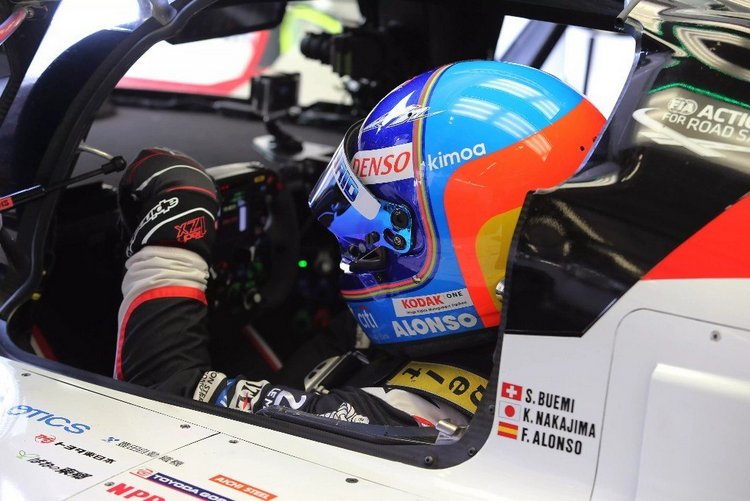 Double Formula 1 world champion Fernando Alonso made his Le Mans 24 Hours race debut on Saturday as the pair of Toyota Gazoo Racing TS050-Hybrids battled for the lead in a race of their own with the rest trailing.

The Spaniard completed a feisty two hour and 43-minute stint after teammate Sebastien Buemi had led away from pole position in the number eight Toyota, and handed over in the lead.

Kazuki Nakajima took over but it was the sister number seven TS050 car, with compatriot Kamui Kobayashi driving, that led as the clock ticked past the six hours (93 laps) mark at the Sarthe circuit and the light started to fade.

The #17 SMP Racing BR1 car was running third, two laps down at the time.

“It’s always more fun when you’re racing and so far it has been a good start of the race for us,” Alonso told Eurosport television. “We are leading with a good margin and hopefully we can keep this result for Toyota and get a little bit more of a safety margin.”

There was a scare on the opening lap when Andre Lotterer made contact with the rear of Buemi’s car in the number one Rebellion.

Toyota changed the rear bodywork at the first pitstop before making another modification after Alonso’s shift.

There was early disappointment for 2009 Formula One world champion and Le Mans debutant Jenson Button, whose SMP car spent more than 90 minutes in the garage and dropped to last place.

Alonso, whose main focus remains Formula One with McLaren, is the talk of Le Mans as he bids to become the second man after late Briton Graham Hill to win the ‘Triple Crown of Motorsport’.

To do that, the 36-year-old double Monaco Grand Prix winner needs to win Le Mans and the Indianapolis 500, which he led last year before an engine failure.

Colombian Juan Pablo Montoya, who has already won Monaco and Indianapolis, is also at Le Mans in the LMP2 class but went off into the gravel at the Indianapolis corner with the United Autosports entry dropping to 18th.

Toyota are overwhelming favourites, as the sole major manufacturer competing after champions Porsche quit last year, but nothing can be taken for granted.