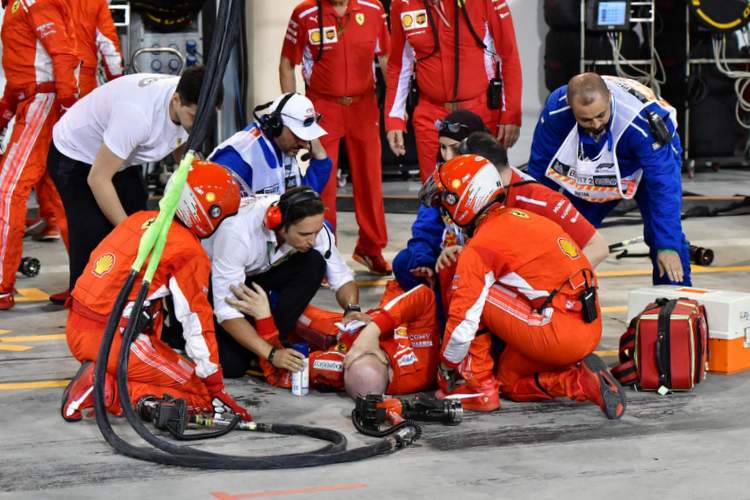 Formula 1 race director Charlie Whiting wants to get to the bottom of a spate of incidents in which car and wheel part company, as has occurred on a number of high profile occasions during the early part of this season.

First McLaren driver Fernando Alonso lost a wheel during his first laps of testing, then at the Australian season-opener Haas team messed up both their pitstops sending their cars out with loose wheels and now, in Bahrain, Kimi Raikkonen’s Ferrari was released before his crew could remove the rear wheel and as a consequence slammed mechanic Francesco Cigarini who suffered a double fracture to his leg during the incident.

Speaking ahead of the Chinese Grand Prix weekend, Formula 1 race director Charlie Whiting is worried that these may not be isolated incidents, “It’s looking like less and less like a coincidence but the two incidences in Melbourne were quite clearly wheelgun operator error.”

“They cross threaded the nuts and thought it was tight, came off and then realised a little too late it wasn’t. [With the incident in Bahrain], the guy hadn’t even taken the wheel off, which is slightly perplexing.”

Whiting also confirmed that the FIA will investigate the wheelguns and establish if they are a reason at all for the failures.

“Alonso lost a wheel in testing if you remember we went through it all with McLaren, they gave us a report in the week,” Whiting recalled.

“We discussed it with the Technical Working Group to understand it all, to make sure everybody else realises these things can happen, everyone tries to learn from them.”

“What happened was that the design of the nose piece that goes into the axel, that is the thing that holds the two-stage retention mechanism. But the way that is fixed into the axel was not quite strong enough so the wheel was a little bit loose, it worked itself loose because it had done four laps prior to that.”

“So when the wheel started to tip a little bit, it put abnormal loads into the things that were holding the nose in and once the nose came out, there was no retention.”

“So a lesson to be learnt there – that was shared with everyone in the Technical Working Group so that they can all look at that and make sure their designs aren’t similar.”

“Of course they said ours won’t do that…” added Whiting.