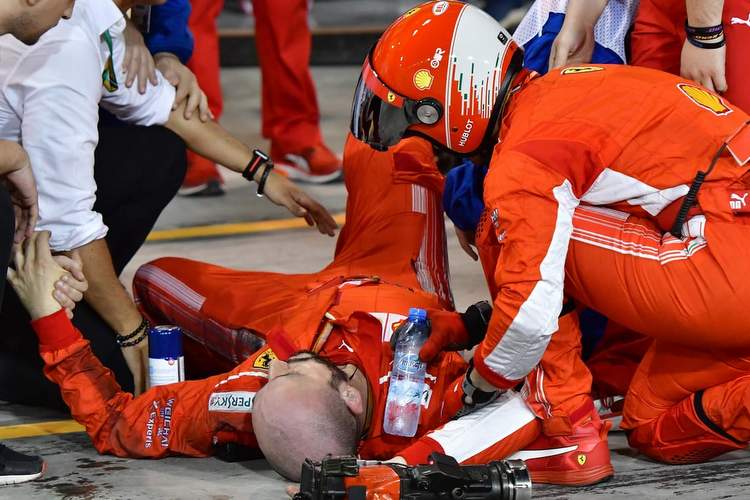 Kimi Raikkonen’s second pitstop during the Bahrain Grand Prix ended in near disaster as one of his mechanics suffered leg injuries after being struck by the #7 Ferrari as it departed its marks.

Raikkonen, who was running a strong third at the time, was released far too soon, the left rear was still on the rim when the Ferrari attempted to leave the pits.

As Raikkonen pulled away the mechanic was grounded by the rear wheel. He came to a halt a few metres after realising what had happened.

The veteran Finn flung his wheel into his car as he stormed back to his pit garage. The mechanic was treated by his colleagues in front of the pit garage before being taken to the circuit hospital.

Sebastian Vettel was aware of the incident and said immediately after his victory, “I’m a bit sad as I think in the pitstop with Kimi one of our mechanics got injured, so send him my best regards.”

“I am sorry for Kimi who could certainly have finished on the podium,” he added.

Kimi Raikkonen ran over one of his crew members leaving the pits. It’s kinda gnarly, so click at your own risk. pic.twitter.com/3rqFSPgN4Y

Wrote on Twitter: “Apparently a shinbone and fibula fracture, our thoughts are with Francesco, stay strong.”

Apparently a shinbone and fibula fracture, our thoughts are with Francesco, stay strong #BahrainGP