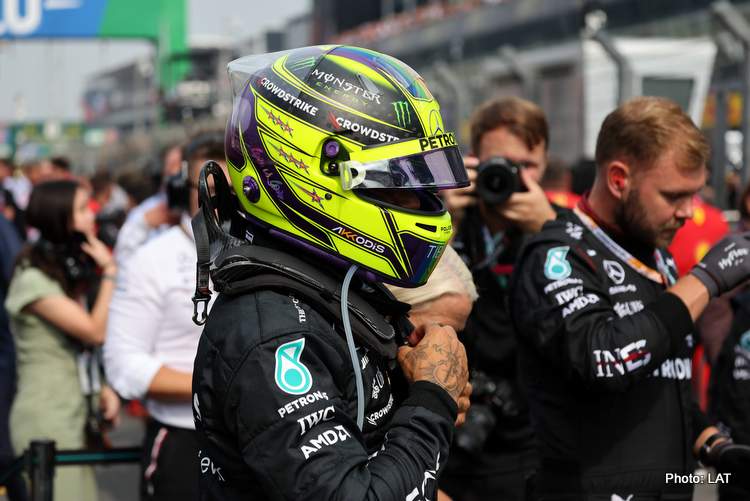 Jacques Villeneuve criticized Lewis Hamilton for his radio rant during the 2022 Dutch Grand Prix, after he saw his chances of a win evaporate following Mercedes wrong strategy call.

Lewis Hamilton put himself in the spotlight for the wrong reason, after his expletive laden rant over the team radio when Mercedes failed to pit him under the Safety Car, which meant he could not fend off Max Verstappen on Soft tyres behind him, ultimately losing out to teammate George Russell and Ferrari’s Charles Leclerc as well.

Hamilton apologized to his team afterwards, but 1997 Formula 1 Champion Jacques Villeneuve believes the Briton should have acted better, especially as Mercedes have given him so much over the years.

“I was amazed by Lewis Hamilton’s outburst in the race and especially the way in which he did it,” Villeneuve said in his formule1.nl column.

“He was aggressive, almost insulting. It is good that he has apologised, but this does not befit a champion,” he added. “After everything the team has meant to him, you should not speak to them like that.”

A shift taking place at Mercedes

Villeneuve is looking elsewhere for the reasons behind the rant, which he believes are on the other side of the Mercedes garage, namely George Russell, who during the race made the call to switch to Soft tyres which helped him overtake his teammate and finish the race a strong second.

“I am seeing a shift taking place at Mercedes,” the Canadian said. “George Russell is quickly developing into the leader of the team.

“He took the decision to go for the soft tyre himself – with all his experience and championships, Hamilton could have done the same.

“They decided to go for the win and it turned out not to be the right decision,” Villeneuve went on. “For years, their advantage was so great that they did not have to take very difficult strategic decisions. They won anyway.

“Now that they are slower, it is more difficult to make the right call. Then Hamilton also messed up his restart, which is where he eventually lost his podium place,” the 51-year-old pointed out.