Spa Qualifying: Verstappen on another level, but Sainz gets pole 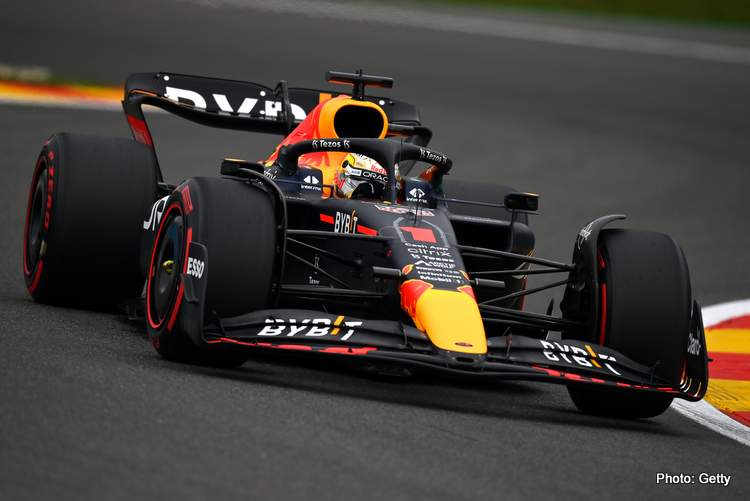 Despite knowing ahead that they will start the race from the back of the grid for power unit penalties, Max Verstappen and Charles Leclerc went through all three sessions of qualifying.

Max Verstappen laid down a marker with a stonking lap of 1:43.665 on his first outing in Q3, over six tenths faster than anyone else. However he did not exit the Red Bull garage to offer his teammate Sergio Perez a tow.

Charles Leclerc put one lap time on the board, and then was out to give his teammate Carlos Sainz a tow, but Sainz final run was a scruffy one.

The Spaniard was lucky that Perez did not improve on his second run in Q3, which meant he kept his provisional second place, that will be inverted into pole on Sunday as Verstappen’s penalty goes into effect.

Grid pens for the Dutchman means that Carlos Sainz will start from pole#BelgianGP #F1 pic.twitter.com/kJsGnKz2rO

Qualifying was delayed for 25 minutes as track officials were doing some repairs for the circuit after a crash that took place in qualifying for the Porsche Cup, one of the support series at the weekend in Spa.

Verstappen was on another planet throughout qualifying as the pace of his RB18 – evident from FP3 – would be definitely keeping Ferrari scratching their heads a they struggled to match their rivals so far this weekend.

The Red Bull ace said after qualifying: “It was an amazing Qualifying but the whole weekend we have been really on it. The car has been working really well and we have basically been trying to fine tune it and it all came together in Qualifying.

“Of course, I had to be careful with the amount of tyres I was using. But I was very happy with my lap, it is an amazing track with an amazing fans and I hope they had a good day,” he added.

“With a car like this it would be a shame to not be on the podium,” the reigning World Champion concluded setting his target for the race.

Carlos Sainz added: “I’m happy to be starting on pole, obviously not so happy to see the gap to Max this weekend and the gap Red Bull have on us.

“We need to keep digging to see why Red Bull are so fast around this track…but to start from pole is good and we will try to win tomorrow.

“I think our race pace is better than our qualifying pace, but there is still something to find,” the Spaniard admitted.

Sergio Perez missed the chance to inherit his teammate’s pole position but is hoping to give Sainz a good run for his money during Sunday’s race.

He said in parc ferme: “P2 is not the worst place to be around here and I think if I am able to get a good run at Carlos, it will be different and I will be on the other side of the row.

“I am looking forward to tomorrow and I think there will be a great race ahead of us. It will be very important to get a good start and do our own race and I think that will be the key for tomorrow,” Perez concluded.

Verstappen’s best time in qualifying was 0.632s faster than Sainz, with the Dutchman’s imperious form surely to offer us some entertainment during the race as he fights his way up the grid from the back where he will be joined by Leclerc.

Ferrari once again messed up sending the Monegasque on new Soft tyres in Q3 when they should have used Softs, admitting their mistake to their driver over the team radio. It remains to be seen how than affects Leclerc’s strategy during the race.

Esteban Ocon finished Q3 fifth fastest, 1.515s off the pace, but will start the race from the back of the grid as well for power unit penalties.

Fernando Alonso was sixth fastest but will be moving up once the penalties are applied. The Spaniard was 1.703s down from the top time despite his teammate giving him a tow.

Mercedes were a disappointing seventh with Lewis Hamilton, a massive 1.818s off Verstappen’s pace, while teammate George Russell was 0.273s behind his teammate in eighth.

Alexander Albon was simply superb, making it into Q3 where he was ninth fastest in his Williams and will be happy to start even three places ahead when Verstappen, Leclerc, and Ocon drop down the grid.

Lando Norris made it to Q3 with the hope of helping teammate Daniel Ricciardo with a tow, but the latter failed to make it to the final qualifying shootout himself adding insult to pain for the Aussie on a weekend where he was announced unwanted at McLaren. 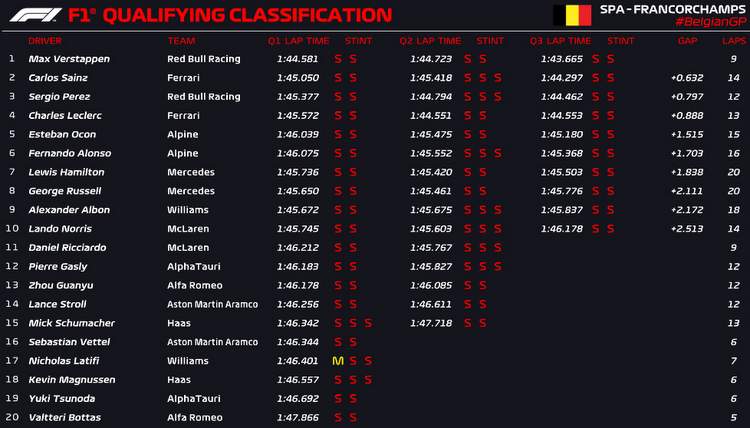 Despite George Russell reporting some “sprinkles” at Eau Rouge on his final run of Q1, the weather remained dry as the remaining 15 cars set out for Q2.

Max Verstappen head out on track on used Soft tyres and immediately set a faster time than his teammate Sergio Perez on the initial runs, despite the Mexican being on new tyres.

Charles Leclerc also took part in the second session of qualifying, and head out on used Soft tyres as well, but his initial run was a scruffy one.

A slightly scruffy lap from Leclerc and he goes P6

He’ll get one more chance to improve that Q2 time #BelgianGP #F1 pic.twitter.com/1W7RXVLwTj

The Monegasque complained that his car was “jumping like crazy in the apex of slow corners” as his first lap in Q2 was only goo for sixth.

The towing games began with the second runs in Q2, as the Red Bull drivers remained in their garage, while both Ferrari drivers returned to the track on new Soft tyres.

In the end Leclerc finished Q2 fastest of all, 0.172s ahead of Verstappen, with Perez third, 0.071s further down the line as Sainz was fifth fastest 0.867s slower than his teammate.

First of the drivers to be eliminated in Q2 was McLaren’s Daniel Ricciardo who was 11th fastest failing to reach Q3 by 0.092s.

Pierre Gasly was next in 12th, 0.060s behind the Australian and ahead of Alfa Romeo’s Zhou Guanyu who in 13th and 0.258s behind the the AlphaTauri driver.

Lance Stroll was next, 14th fastest and 1.107s ahead of Mick Schumacher in the Haas. 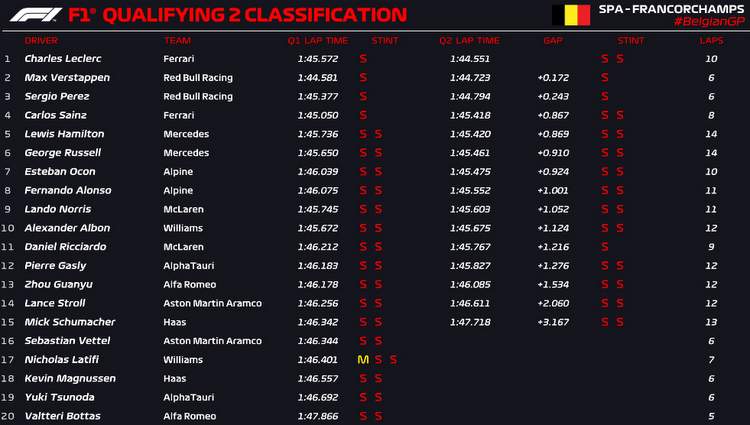 The start of Q1 was in dry conditions despite the track being covered by overcast, with Williams’ Nicholas Latifi the first driver on track for an exploratory lap on Medium tyres, as Mick Schumacher soon followed, being the first to set a timed lap.

At the end of Q1, Max Verstappen went fastest of all with Carlos Sainz behind him in second with 0.469s separating the pair, showing how much pace advantage Verstappen is enjoying.

Behind them Sergio Perez was third, 0.796s off his teammate’s pace with Charles Leclerc fourth, 0.195s behind the Mexican.

Sebastian Vettel was the first driver to be eliminated in Q1 as he was 16th fastest and missed the cut by a painful 0.002s.

Behind the German by 0.057s Nicholas Latifi was 17th fastest as Kevin Magnussen was only 18th fastest for the Haas, 0.156s behind the Canadian.

Yuki Tsunoda ruined his final lap with a massive lockup at the Bus Chicane and will start the race from 19th on the grid 1.174s ahead of Valtteri Bottas who was last, the Finn aborting his final flying lap. 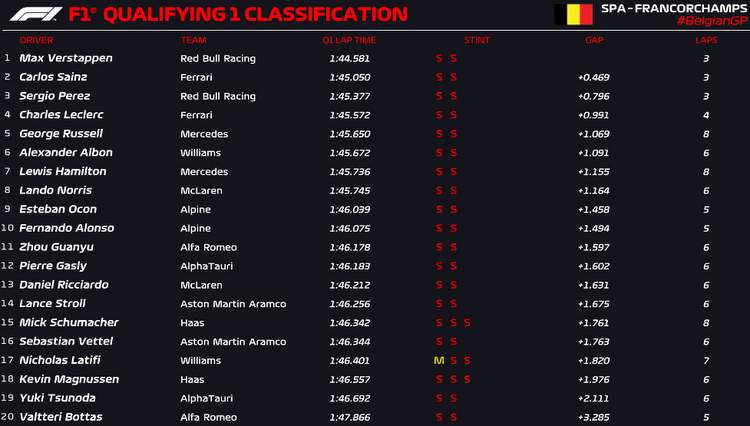