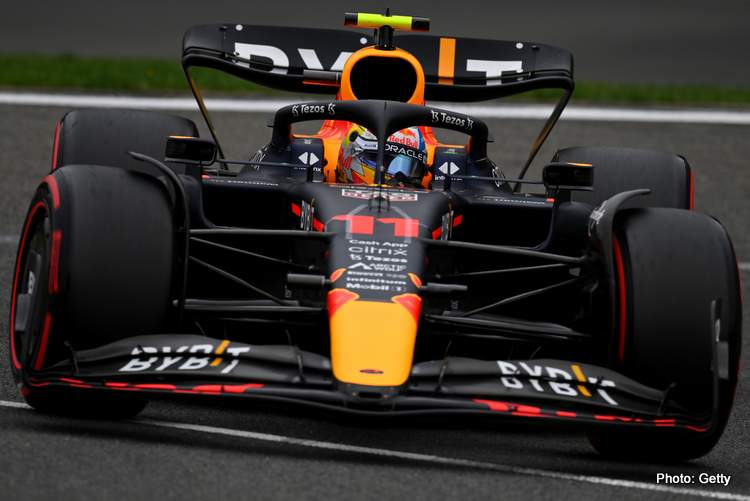 The Mexican seems to be in a good position to take pole on Saturday afternoon in Spa as he was over one tenth fastest that Verstappen in second who will also be taking a grid penalty for having new power unit components bolted to his RB18.

However the gap between Ferrari and Red Bull must be worrying for the formers as their best driver, Carlos Sainz finished the session third fastest over seven tenths slower than Perez.

This should set things up nicely for qualifying, as to whether Verstappen will take part in it despite his penalties, which also applied to Charles Leclerc, as both drivers would be looking to start ahead of the each other on Sunday’s race.

FP1 and FP2 where somehow messy in terms of showing us what the pecking order at Spa is, other than the obvious; Red Bull and Ferrari are favorites, with the advantage leaning towards the former.

It doesn’t seem that TD039 has slowed down any of them, while Mercedes appeared to be lost trying to get their new updates to work which meant the likes of Lance Stroll featured near the podium positions despite the time gap.

Despite his slow start to Friday, Lando Norris seems to be in a happy place with his heavily upgraded McLaren in the afternoon.

With Max Verstappen and Charles Leclerc having to serve engine penalties on Sunday for taking new power unit components, it might be Mercedes’ best chance to maybe get a win this year, George Russell’s first, or Lewis Hamilton’s record keeper – he won in every Formula 1 season he contested.

But they Silver Arrows didn’t seem quite happy around Spa and they still have to deal with a Carlos Sainz, looking decent on Friday, and Sergio Perez if he comes out of his vacation mode.

Bagging a win on the weekend when they are celebrating 55 years of AMG would be properly fitting for the World Champions.

Toto with the baggy fit. 🔥😂 pic.twitter.com/Kyaq11VEki

Other than that, let’s keep a look on the weather around the Ardennes and the many surprises it may spring.

The session started in dry conditions with the forecasts giving a 30% chance of rain, as drivers started off with some runs on heavy fuel loads.

George Russell reported some issue with his hybrid system as it seemed it wasn’t delivering power properly out of the corners.

“Massive D-rate out of that last corner,” the Briton said over the team radio, who seems to be still struggling with the tyres as he told his team a bit earlier “the tyres are gone” shortly after his first outing.

Ferrari seemed to be running their Baku-spec rear wing, a low downforce setup, to maximize their pace in the first and third sectors, hoping that would compensate for the time lost in the second sector.

Haas called in Mick Schumacher to the pits, a little over 20 minutes into the session, to sort out an “issue” they found on his car noting that Kevin Magnussen broke down on track on Friday due to a battery problem.

Haas later reported it was a minor sensor issue.

Mick pits after finishing his high-fuel run – the team are just checking a minor sensor issue but it doesn’t look anything serious.

Notably none of the Ferrari’s have made an appearance on track until Carlos Sainz took to the track after 25 minutes from the session green light, and went straight to the top of the time screens.

Sainz is up to speed quickly ⏱

In his first flying lap of the session he goes P1 👏#BelgianGP #F1 pic.twitter.com/pxlQsc6zfK

The times soon started to fall, as the teams and drivers reverted to qualifying runs on Soft tyres as the Ferraris and Red Bull traded blows that saw Sergio Perez rise to the top. The Mexican is clearly in a better place on Saturday after his Friday struggles.

However Max Verstappen put in a serious lap, removing his teammate from the top of the time screens by almost half a second, on 14-lap-old Soft tyres.

With ten minutes remaining, the stewards announced that Verstappen might be in trouble as he may have ignored Yellow flags on his flying lap. They soon announced the Dutchman will not be penalized.

Soon after that, Leclerc almost binned his Ferrari going too hot into Turn 12, hitting the barriers, but was able to get his F1-75 back to the pits but lacking his right front wing end plate.

“I’m back out; I don’t think the car is damaged,” the Monegasque tells his team over the radio. The  incident caused a brief Red flag.

Leclerc into the gravel trap 😮

He bumps the barriers but looks like there’s no major damage done #BelgianGP #F1 pic.twitter.com/LFc6HHvmNQ

The RB18 seems to be a happy bunny around Spa, as Carlos Sainz, third in FP3, was 0.777s slower than Perez in the Ferrari, as his teammate Charles Leclerc seemed to struggle almost destroying his car going too fast towards the end of the session.

Lando Norris continued his strong form and was fourth fastest for McLaren, but 0.918s off the pace, with Fernando Alonso 0.096s behind him in fifth for Alpine.

George Russell was the faster of the Mercedes pair, sixth fastest, 0.010s behind the Spaniard, as Lewis Hamilton was on down in 12, 0.698s slower than his younger teammate.

Charles Leclerc finished the session seventh fastest, after his gravel excursion at Turn 12, 1.073s slower than the benchmark time.

In eighth came Sebastian Vettel, in the Aston Martin clocking a 1:46.166, while Esteban Ocon was behind him, over four tenths further down the road in ninth.

Pierre Gasly was tenth fastest 1.557s down from the top. 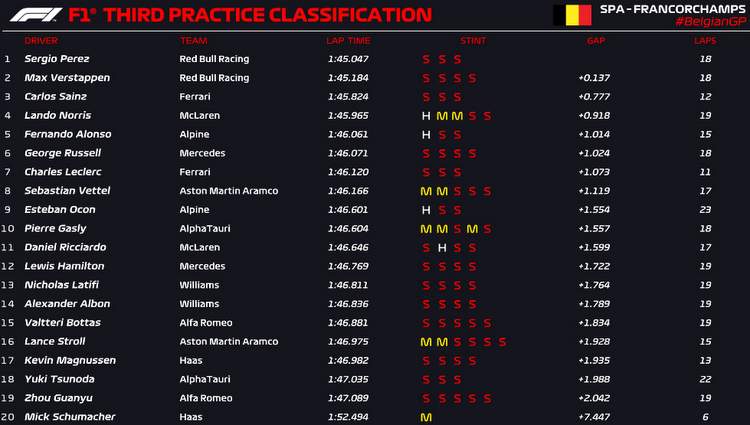