Sainz: I’m not going to lie, first win a relief 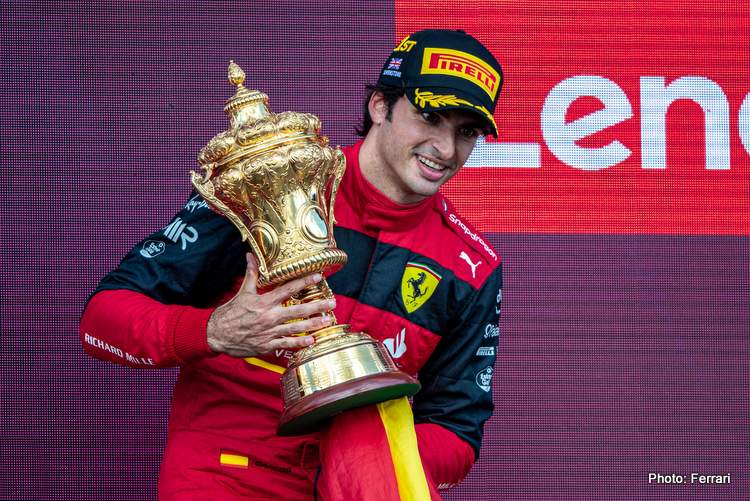 Carlos Sainz revealed that winning the first Formula 1 race of his career at the 2022 British Grand Prix was a relief after waiting 150 races to achieve that.

Sainz score his maiden F1 win, one day after achieving his maiden pole position, while contesting his 150th F1 weekend.

But it was not so straight forward for the Spaniard, as at points he seemed to be losing out to Red Bull’s Max Verstappen, and after the Dutchman fell back down the order due to car damage, Sainz had to deal with teammate Charles Leclerc who was faster than him.

Ferrari moved Sainz aside for Leclerc at one point, but the late Safety Car, gave the former his lifeline, as he was pitted for fresh Soft tyres, his teammate kept out on worn Hards, after which the #55 Ferrari sped away into the lead and the win.

“There you have it, you have a win in Formula 1 and for sure I’m going to keep fighting for more,” he vowed. “I’m going to keep improving with this car and try and make it happen. Honestly I never stopped believing that this win was going to come.”

Sainz reflected on previous occasions where he came close to winning saying: “Even if this year has been tough for me, and it hasn’t been the easiest, I knew in Monaco I could’ve won, I knew in Canada it was super close and it was just about time that something happens in a race that you can win… so keep believing; if there’s something this sport has taught me, keep believing.

“This is a great example that still happens,” the 27-year-old from Madrid insisted.

Sainz pushed as much as he could

Sainz looked back on his race saying: “I gave myself the best chance to stay ahead, by pushing as much as I could, but to a point that I was destroying so much my front tyre that it made total sense for Charles to go through, and I let him by as soon as the team told me to do so.

“I’ve always been a team player, I will always be a team player and especially in Ferrari, I know the team is in front of me and my personal interests,” he said of the way he conducted himself within the team.

“I had the same philosophy when I overtook Charles, when I overtook him back. Today is a good example that we managed the race; we had two cars, first and second, before the Safety Car restart,” the Ferrari driver pointed out.

Speaking afterwards in the team’s press release, Sainz said: “What a day! Winning my first F1 GP and with Scuderia Ferrari in front of this amazing crowd, at one of my favorite tracks, Silverstone, is literally amazing.

“Mentally it was one of the toughest races I’ve done: managing the gaps, lots of fights on track, the second start. We struggled a bit with understeer and on the second stint we had to save fuel in order to make it to the end, so the lift-and-coast put me at risk from the cars behind.

“However, as soon as the Safety Car came out, we knew it was paramount to change the tyres as mine were pretty old. At the restart, I had fresher tyres but we were fighting for a 1-2 as a team, so I tried to be as clean as possible in overtaking Charles.

“Thanks to the fuel saved behind the Safety Car we could then push until the end and finally I got my first win. I will enjoy it for today but we’ll immediately start working on preparing for the next one,” he concluded.

🤩 What a race… first win in F1 and with @ScuderiaFerrari!! Thank you all for your unconditional support. Let’s keep fighting!!! 💪🏼💪🏼