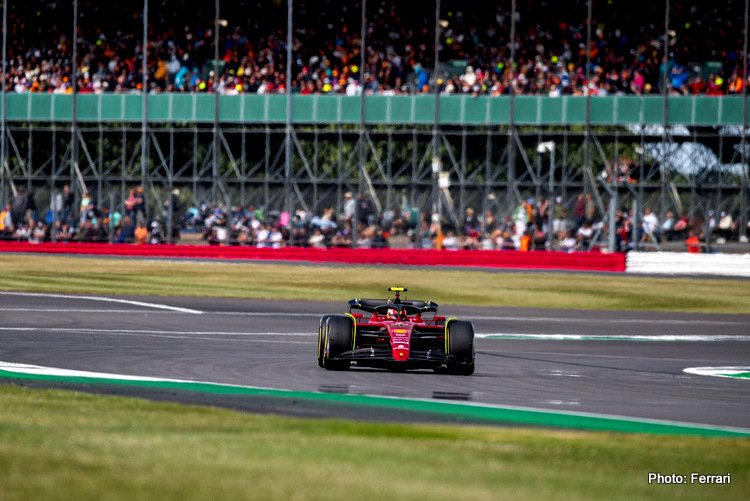 Ferrari driver Carlos Sainz won a drama-packed 2022 British Grand Prix, his first victory in Formula 1 on the occasion of his 150th start and a convincing triumph too as he did it his way.

During a fraught race, tensions at a peak, Sainz berated his team as they tried to hold him back before the final ten laps of a race that was marred by a massive early crash. Instead he defied them and did it his way for a memorable first win at the highest level, after snatching his first ever pole position one day earlier.

The crash involved several cars, Zhou Guanyu being the most seriously afflicted in the collision that put paid to the Chinese driver’s race, as well as accounting for immediate DNFs for George Russell and Alex Albon.

For the restart, Verstappen bolted on the yellow band Pirelli Mediums, unlike the first start when he opted for the Softs, the only top runner to do so.

The second time – the grid reset to its order from qualifying – Sainz got his start right from pole position this time with Verstappen, Leclerc and Perez going wheel to wheel with the #1 Red Bull suffering damage later that would impact the rest of the Dutchman’s race later.

Nevertheless, the Red Bull was on a charge and on lap ten, with tyres degrading faster than Red Bull’s, the Ferrari of Sainz went wide and that was the sniff Verstappen needed to take the lead.

But two laps later Max slowed dramatically and had to pit with what he thought was a puncture, gifting Sainz the lead again, with Leclerc stalking his teammate and Hamilton reeling off fastest laps behind the Reds. The trio way ahead of Norris and Alonso.

Verstappen’s race was compromised by damage to his Red Bull 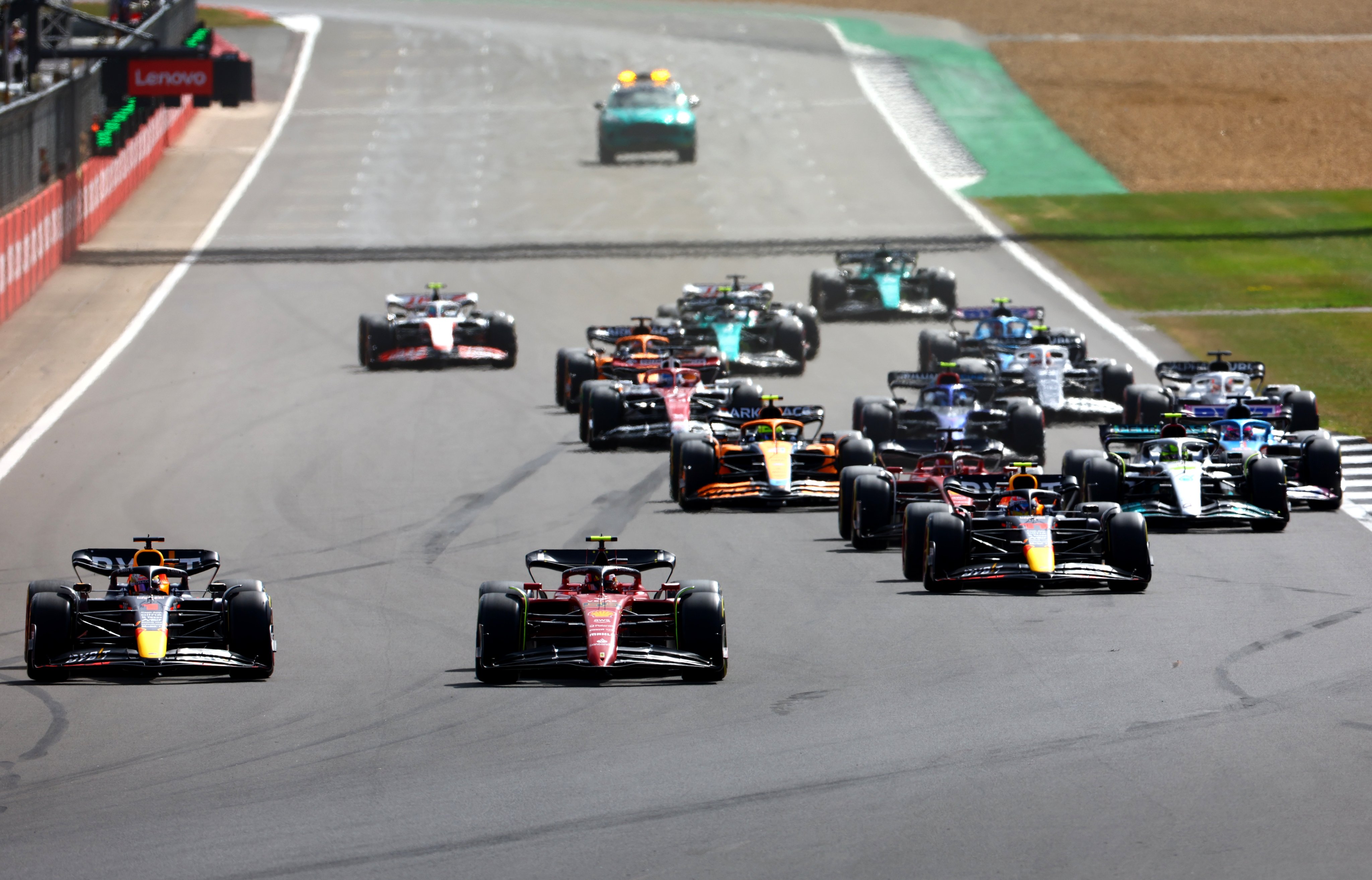 After his stop, the 2022 F1 World Championship leader’s race went south. Max was never a factor again as he dropped down the points, unable to find any grip thereafter.

At the front with Sainz leading, Leclerc was pleading with his team to let him go past, insisting he could go faster. Things got very tense between their drivers. Giving the Ferrari strategists the headache we all knew was coming at some point.

By lap 20, Hamilton had dipped the gap to below the three seconds when Sainz was pitted, leaving Leclerc in the lead but losing a couple of tenths, his Ferrari running with a damaged right front wing endplate after his first lap contact with Sergio Perez. By lap 23, the gap was two seconds.

Hamilton remained quickest, even with Sainz on fresher rubber behind him. The eight-time British Grand Prix winner was intent on making it nine to the delight of the 150,000 fans who descended on Silverstone.

At the end of lap 25, Ferrari brought in Leclerc from the lead for his first stop with Hamilton taking the lead to massive cheers around his home track. Charles emerged behind Carlos, with Hamilton yet to stop 18 seconds up the road at the point, and was soon ticking off fastest laps within DRS of his teammate.

The Scuderia’s pit wall then reported to their drivers: “Free to fight!” Until the message came for the Spaniard to up his pace or swap positions with Charles, a couple of laps later Leclerc got his free pass. The gap to Hamilton was 18 seconds ahead, with a stop in hand. It was nip and tuck.

On lap 34 Hamilton pitted but it was a slow stop, which meant he emerged further down than he would want on much fresher rubber to the Ferrari duo ahead. Sainz a almost four seconds ahead of the #44 Mercedes. 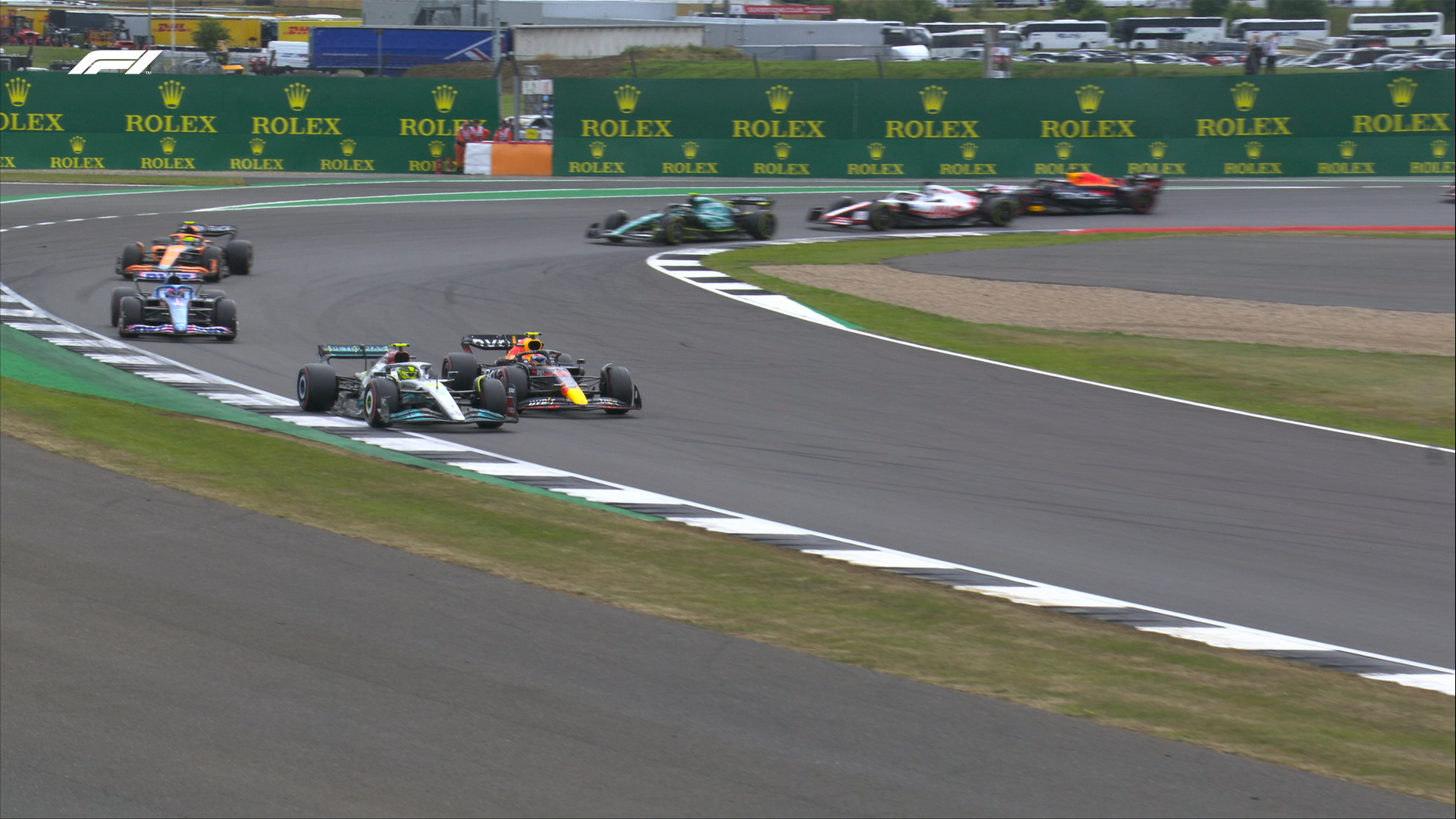 On lap 40 a the Safety Car was deployed when Esteban Ocon’s Alpine expired on the straight which triggered a flurry of pitstops as the race took another twist.

Sainz, Hamilton and Perez, who had been anonymous until then, all pitted for softs without losing positions while Leclerc remained out in the lead but on the ageing Hards. Alonso and Norris were also on fresh softs behind the leading quartet.

The stage was thus set for a ten-lap shootout!

But before the race was re-started, Ferrari then asked Sainz to help Leclerc get away, the Spaniard refused for obvious reasons and powered past Leclerc and powered away, as his teammate’s Ferrari dropped behind with Perez getting the better of Hamilton at the same time.

What transpired was jaw-dropping racing at the highest level with Hamilton, Leclerc, Perez and Alonso rubbin’ rubber and Norris with the best seats in the house. The boys delivering some of the best racing seen in ages, and clear proof that these new generation F1 cars are indeed racy.

While behind him war ensued, Sainz was two seconds up the road in a blink of an eye, he did the right thing to scold his team, before making his 150th Grand Prix his most memorable, and sending a message to all and sundry at Maranello: “Your team orders would have lost us the race!”

Instead, he delivered a great victory for his team, and he was rightfully delighted: “I don’t know what to say, it’s amazing. First race win, 150 races later, with Ferrari in Silverstone… I cannot ask for more.

“It’s a very special day and a day that I will never forget. Thank you everyone for the cheers. Lewis was on it today, one of his days but we managed to hold on,” added F1’s 112th Grand Prix winner.

Behind him Perez emerged in second from the hottest scrap seen in ages, with Hamilton taking third from Leclerc, Alonso and Norris next.

Hamilton: I gave it everything, I was trying to chase down those Ferraris but congratulations to Carlos 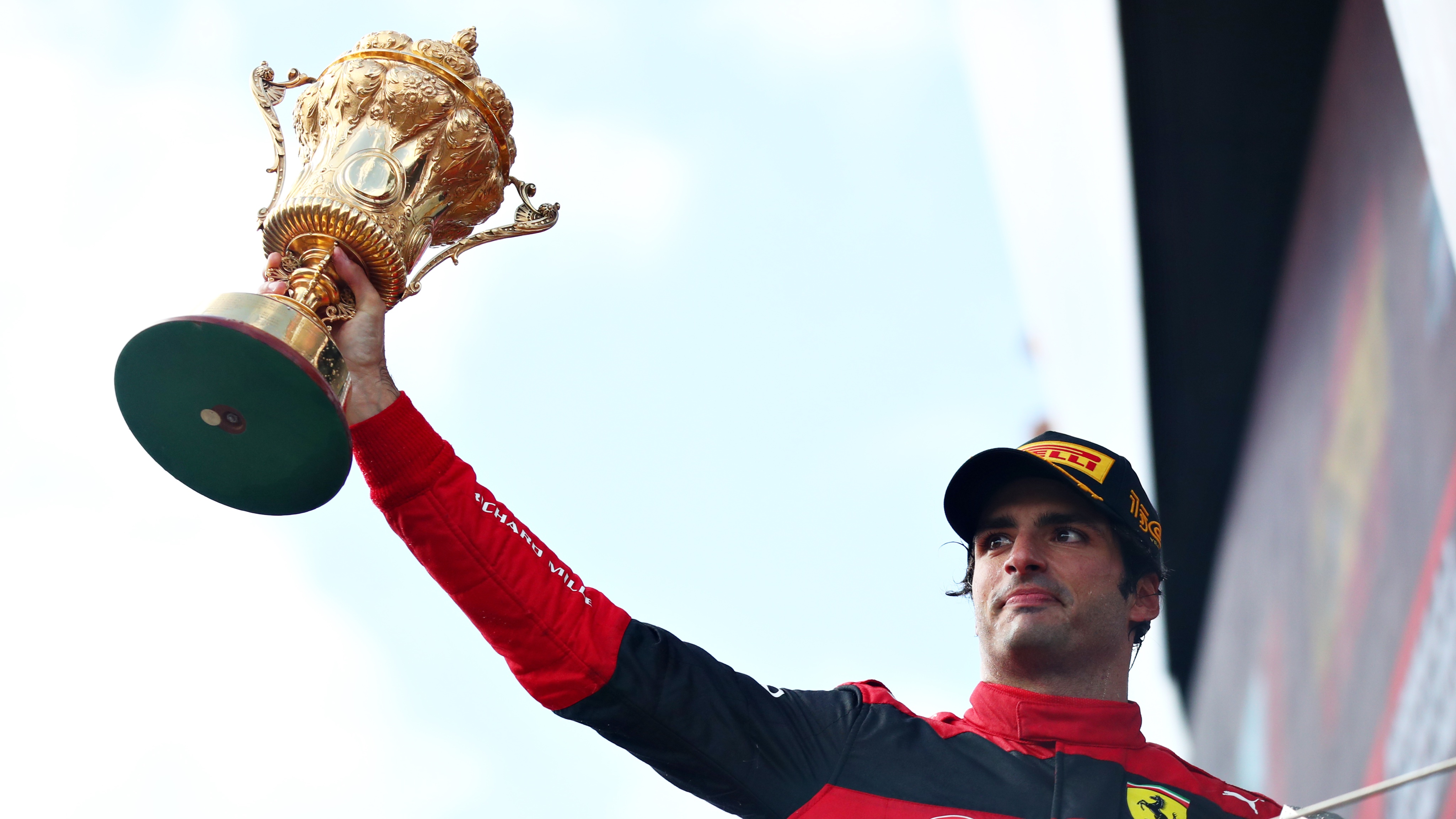 Speaking to former teammate Jenson Button in parc ferme, Hamilton said of his race: “First I really have to give it up to this crowd, thank you to everybody for the incredible support. We don’t see this all around the world, this is the greatest group that we get to see so I’m so grateful for that.

“I gave it everything today, I was trying to chase down those Ferraris but congratulations to Carlos, they were just too quick today for us.

“At the end, I was in amongst that battle but those guys were just too quick for me on the straights. I’m so, so grateful for the hard work the team did to get an upgrade here. We’ve made a step closer, so we’ve got to keep pushing,” added Hamilton.

His mentor Sebastian Vettel recovered well from 18th to finish ninth for Aston Martin, ahead of Kevin Magnussen in tenth making it a double points finish for Haas and their un-updated car.

While Max Verstappen made a bullet start to take the early lead with Carlos Sainz, Lewis Hamilton, Charles Leclerc and Fernando Alonso in his wake.

But in the heart of the midfield, all hell broke loose, with TV not showing replays initially as marshals attended the stricken Alfa Romeo of Zhou, his car seen slithering across the track at high-speed upside-down.

The replays were shocking, the sheer violence of the collisions and Zhou’s Alfa Romeo caught miraculously by the trackside fencing. That Zhou survived without serious injury or worse, is a testament to the safety of this era’s cars. 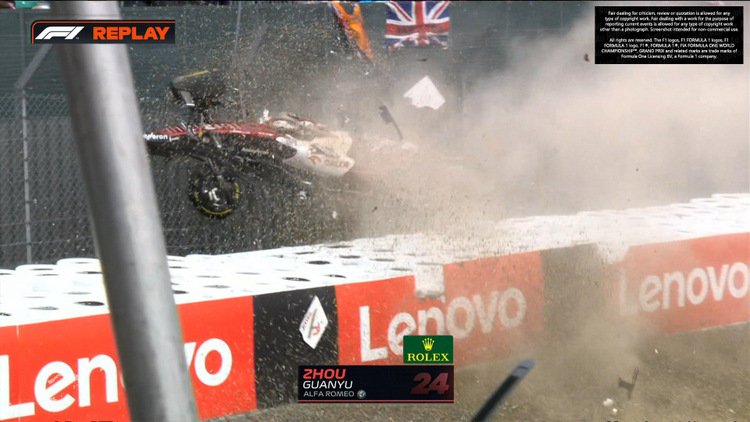 “Zhou Guanyu is conscious and now at the circuit’s medical centre to undergo evaluation,” the FIA statement added.

The FIA also released a statement shortly thereafter: “The FIA advises that following the incident at the start of the race, emergency crews were immediately in attendance, and the drivers of Car 23 (Albon) and Car 24 (Zhou) have been taken to the medical centre. Both drivers were conscious and will be evaluated at the medical centre”

The crash began when Russell tagged the AlphaTauri of Gasly as he drifted to block the Frenchman, which sent him into the Alfa Romeo of Zhou, triggering a chain reaction as mayhem ensued when other drivers came onto the scene unsighted, squeezed and into cars facing in all directions, prompting flashbacks of the Jody Scheckter triggered start chaos at the start of the 1973 race.

The governing FIA said emergency crews were quickly on the scene to extract Zhou, whose car skidded upside down along the track at speed before flipping over the barriers.

The rookie remained conscious and was taken to the medical centre for further evaluation along with Williams’ Alexander Albon.

At the same time, Alpine’s Esteban Ocon limped back to the pits on three and a half tyres, with the half flailing on a rim and DNF to his name. 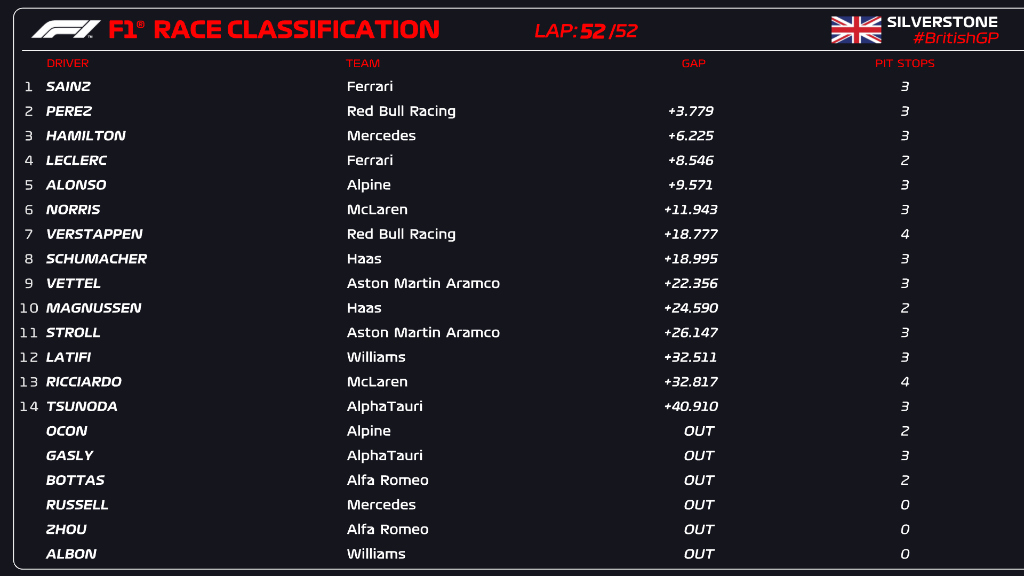 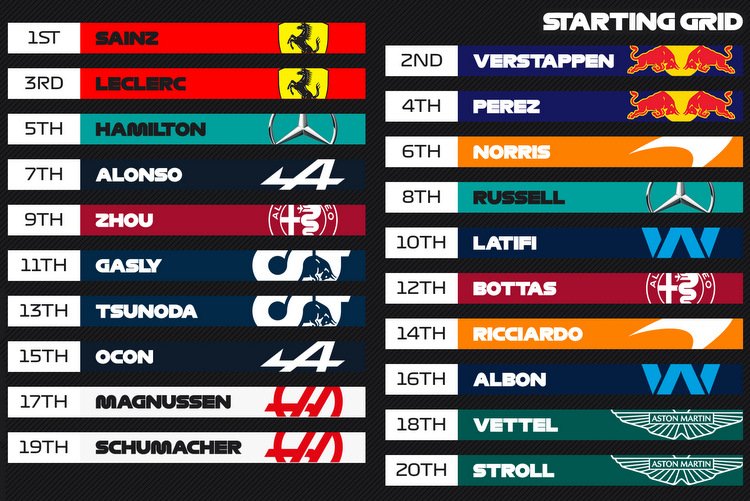