Binotto: At some stage Red Bull will stop development 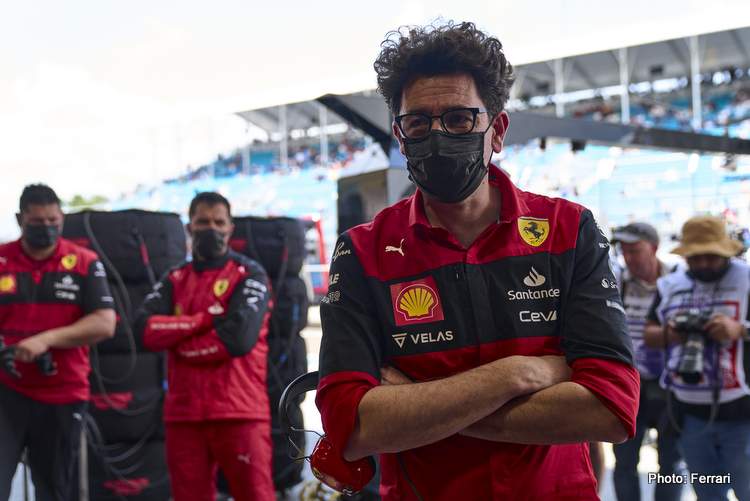 Ferrari boss Mattia Binotto revealed he is not concerned about Red Bull’s pace or upgrades who are bound to stop development at some point due to the budget cap.

Five races into the 2022 Formula 1 season, Ferrari find themselves leading both Championships with Charles Leclerc, despite Red Bull’s Max Verstappen taking another chunk out of Leclerc’s lead after his win at the Miami Grand Prix, despite Ferrari’s superiority in qualifying as they locked up the front row.

With Ferrari yet to introduce any significant upgrades to their impressive F1-75, Binotto does not seem to be concerned about his team’s competitiveness against their rivals who have been working hard developing their RB18.

“I always said that we should wait five races at least to assess the proper competitiveness between the cars and the teams,” Binotto told the media in Miami.

“Now, five races have gone, we are leading both championships which is great. Ferrari should not be too disappointed,” he added.

“But it’s true that Red Bull improved their car. Since the very start of the season they introduced upgrades. Today, if I look at the last two races, maybe they got a couple of tenths per lap faster to us.

“Now, no doubt that in order to keep the pace we need to develop ourselves and introduce upgrades,” the Ferrari boss admitted.

Binotto believes that the budget cap implemented by the sport will halt Red Bull’s upgrades soon, while revealing Ferrari will be bringing upgrades to their car in the coming races.

“Because there is as well a budget cap. I hope that at some stage Red Bull will stop development,” he said. “Otherwise, I will not understand how they can do that.

“But let’s say that in the next races it will be at least our turn to try to develop the car as much as we can and introduce upgrades.

“I think it’s not a surprise that we may have a package in Barcelona which will be important for us. As usual I hope that the package we are introducing is working as expected.

“In that case it can be good in order to try to catch up the current gap we’ve got compared to the Red Bull,” Binotto hoped.

The Swiss-born Italian pointed out that despite their continuous car development, Red Bull have not pulled out a worrying gap over Ferrari, evident by both Ferraris hogging the front row after qualifying in Miami.

“I believe that Red Bull have installed upgrades in the last races and these updates have made their car simply faster,” he said. “I don’t think that the differences is huge.

“It is a matter of maximum a couple of tenths. We should not forget that yesterday we locked the front row. So, in qualifying, we had a better performance compared to the Red Bull.

“Overall, in a weekend, I don’t think there is much difference between the Red Bull and the Ferrari,” Binotto confidently claimed.

Red Bull should be concerned

Revisiting the budget cap, Binotto insisted that Red Bull should be worried about their own development program and not Ferrari.

“If there is a concern it is how much Red Bull are developing considering the budget cap. That’s certainly a concern they have got,” he believed. “But more than a concern as I said… maybe it is a hope because at some stage the Red Bull will need to stop their development.”

On Ferrari’s own development strategy the 52-year-old admitted: “We do not have the money to spend to bring upgrades at every single race. It is as simple as that. Not because of an inability but because of the budget cap.

“So, we need to try to focus development on when we believe it’s the right moment and the right spending,” he concluded.

Worth noting, is that Ferrari ace, Leclerc has called on his team to upgrade the car after he was defeated for the second race in a row by Verstappen. (Additional reporting by Agnes Carlier)