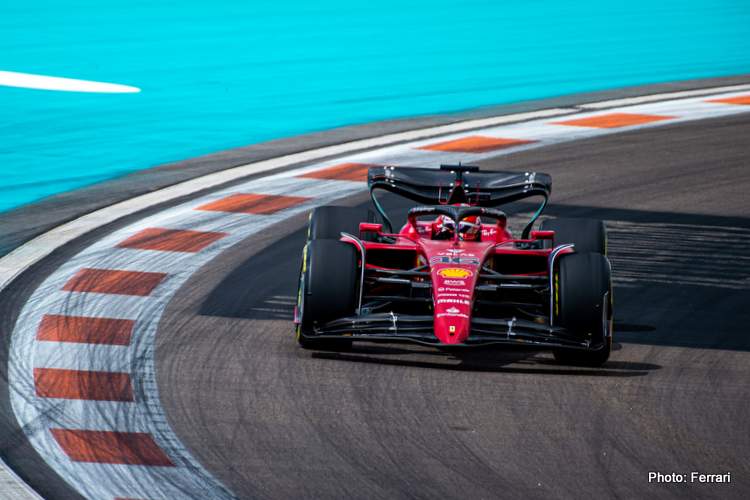 Charles Leclerc had to settle for second place at the 2022 Miami Grand Prix, but stressed that Ferrari should start updating their F1-75, claiming upgraded will be important.

The 2021 Formula 1 Championship leader had to answer to the devastating pace race winner Max Verstappen showed around Miami, as his Ferrari suffered with the tyres in the heat of Miami.

Even a late race safety car erasing the Dutchman’s lead could not help the Monegasque overtake him for the win.

“It was a very difficult race physically,” Leclerc said after the race. “We struggled quite a bit on the medium tyres in the first stint and got overtaken. It made our race a bit more difficult from that moment onwards.

“On the hard we were very competitive and towards the end I thought I could get Max at one point but today they had the advantage in terms of pace.

“We need to keep pushing,” the 24-year-old insisted. “Upgrades will be important and I hope now we can do a step up from the next race on wards. It has been an exciting beginning to the season and that’s what we like to see.”

Disappointed that we didn’t have enough pace to win the race today but we’ll work harder than ever to get back on top in race pace.
Miami, you were incredible though, loved every seconds of this week 🇺🇸❤️ pic.twitter.com/Zro9LtMWm8

All in all, a good weekend for Leclerc in Miami

Leclerc added in the team report: “All in all, we had a good weekend here in Miami, so of course I am disappointed to miss out on first place.

“While we had good pace on the Hard tyres, it was more tricky for us on the Mediums which our competitors were just faster on today, so we couldn’t close the gap in the first stint.

“I thought we’d have a shot at taking back the lead after the Safety Car, but it just wasn’t enough today,” the four-time race winner lamented.

“I thought the atmosphere was amazing this weekend and there was a really great show around the race and I look forward to coming back,” Leclerc concluded.

Ferrari took the decision to keep both cars out on track when the safety car was deployed to clear the Lando Norris/Pierre Gasly crash, and Mattia Binotto was questioned by the press whether that was the mistake that didn’t allow Leclerc to fight for the win.

Binotto said in response: “The reason is that we believed that in terms of warm up, a used tyre would have been stronger than a new one and that we would have suffered more warm up issues with a new hard which was the one that had available in the garage.

“So we decided to stay out because we believed that was the best chance for us to have a good warm up and attack in the first laps, which is what happened.

“The best opportunity for Charles had been just on the very first lap after the safety car,” the Swiss-born Italian revealed.

Leclerc still remains on top of  the Drivers Standings, but his lead has been cut down to 19 points, as Verstappen took a 26-point haul in Miami having also secured the fastest lap of the race with its bonus point. (Additional reporting by Agnes Carlier)