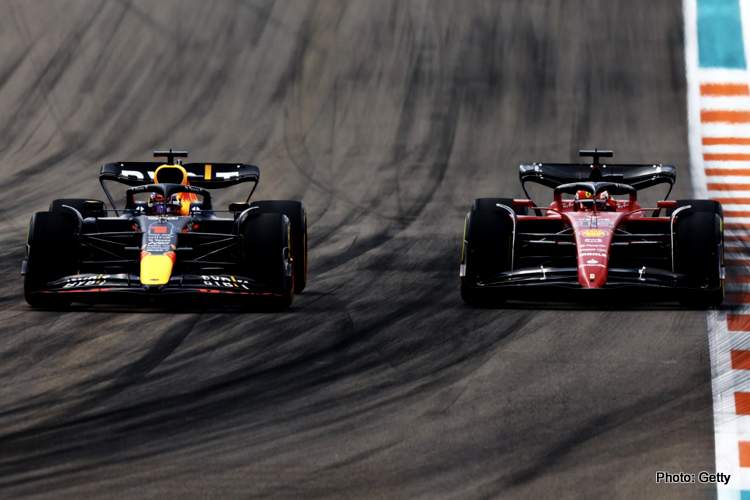 Max Verstappen won the first Miami Grand Prix with a dominant victory over Charles Leclerc in what will be remembered as a mundane race, despite the unprecedented hype before the show, in the shadow of Hard Rock Stadium home of NFL giants, the Miami Dolphins.

But the day was about Formula 1, not football, and while the sport wows the United States, the race was nothing to write home about and will be remembered for the sweltering heat which promised rain that never came.

Leclerc did everything right from pole position, as did Verstappen starting directly behind the Ferrari – the clean side of the track – the pair darted into the lead nose to tail, with Carlos Sainz tucking into third from second on the grid and in the other Red Bull Sergio Perez chased the trio ahead.

On lap nine, Verstappen made his move to take the lead from Leclerc effortlessly where he remained, thereafter controlling the race and the gap pegged at about seven seconds or so when Lando Norris and Pierre Gasly collided, the McLaren slamming the wall after tagging the AlphaTauri and prompting a safety car on lap 41.

In that ‘first chapter’ of the race, the top ten were: 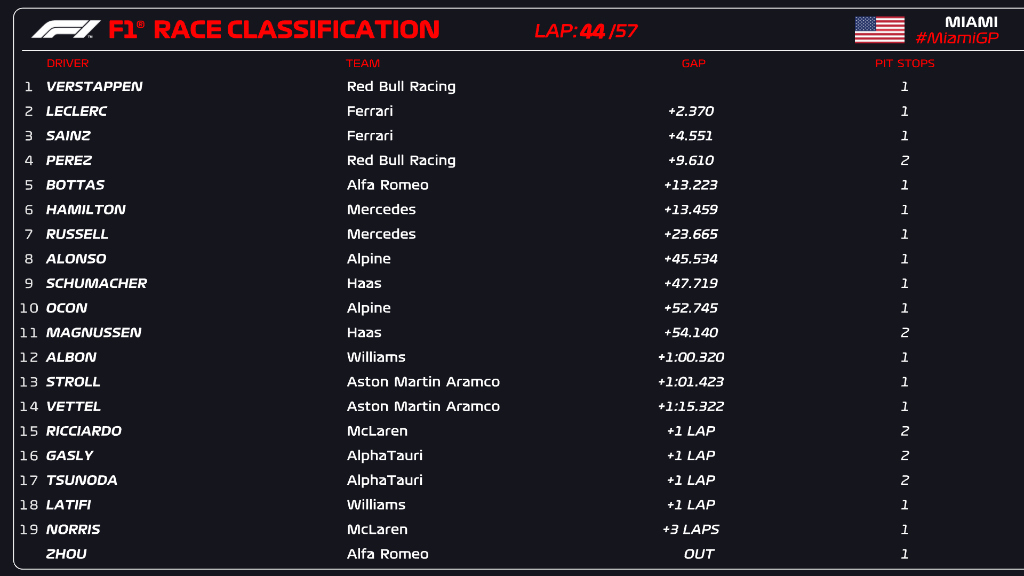 The restart on lap 47 meant a sprint race for the last ten laps, and what a spell it was! With everyone concertina-ed with battles across the field with Leclerc harassing Verstappen, Perez pestering Sainz relentlessly.

Behind the leading quartet, Hamilton, Russell and Bottas slugged it out, the Mercs going side-by-side in heart-stopping style, in their wake Fernando Alonso had Mick Schumacher and Esteban Ocon (who started from the back of the grid!) all cover the back of him. No certainty in the top ten with ten minutes to go.

But in the end, Verstappen soaked up everything Leclerc could throw at him taking what in the end was a comprehensive victory, maximum points for Max in Miami.

Verstappen said as he slowed down after claiming his 23rd Grand Prix victory: “What a race, that was nice. Tough one, but really good. Outstanding job, a good recovery so we can be proud of that.”

Exhausted, hot and sweaty but clearly chuffed, added in parc ferme: “It was an incredible Grand Prix. Very physical but I think we kept it exciting until the end. I am incredibly happy with winning here in Miami, it was an incredible Sunday for us.”

Leclerc settled for second as Sainz held off Perez to make it two Ferrari drivers on the bottom step of the podium, and Red Bull’s reigning F1 World Champion Verstappen again on the top step.

After five rounds of the 2022 Formula 1 World Championship, Leclerc still leads the championship by 19 points, down from 27 before the race as Verstappen continues to close the gap in the title chase to make up for the two early DNFs this season. 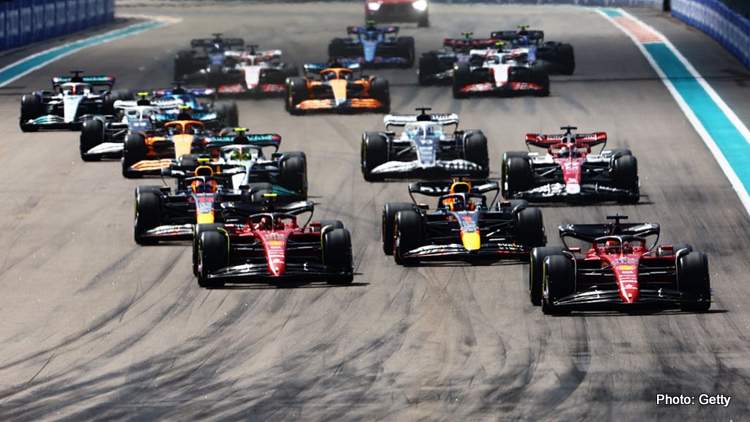 After the first lap misfortune at Imola two weeks earlier, Sainz did well to douse the tremendous pressure that was mounting on him by delivering a strong and redeeming performance. He defended hard to take third after a feisty attack from Perez who had to settle for fourth.

Sainz said of his afternoon: “Obviously, after the crash on Friday, I had a little bit of neck pain going into the race but I had to manage it and I fought through it.

“Especially with Checo at the end on the medium tyres he was very difficult to keep behind but we managed to keep the volume which is a decent result. It wasn’t easy at all.

“It has been a tough races with the tyres and the heat, the car was sliding a lot and we got what we deserved I think which is a decent P3 and we can build it up from here,” added Sainz.

Russell was fifth yet again, from nowhere on the grid the Mercedes driver delivered a gutsy performance, never giving up despite running the hards amid a field of yellow Medium Pirelli tyres early on. The safety car played in his favour, with fresh tyres he had the ammo to beat Hamilton again on the day.

Former Merc man Bottas was ahead of the pair of Silver Arrows but he got it wrong late in the race, allowing both to swoop past and relegate the Alfa Romeo driver to seventh.

Bottas nearly beat both Mercedes, but in the end slipped up to let them both by 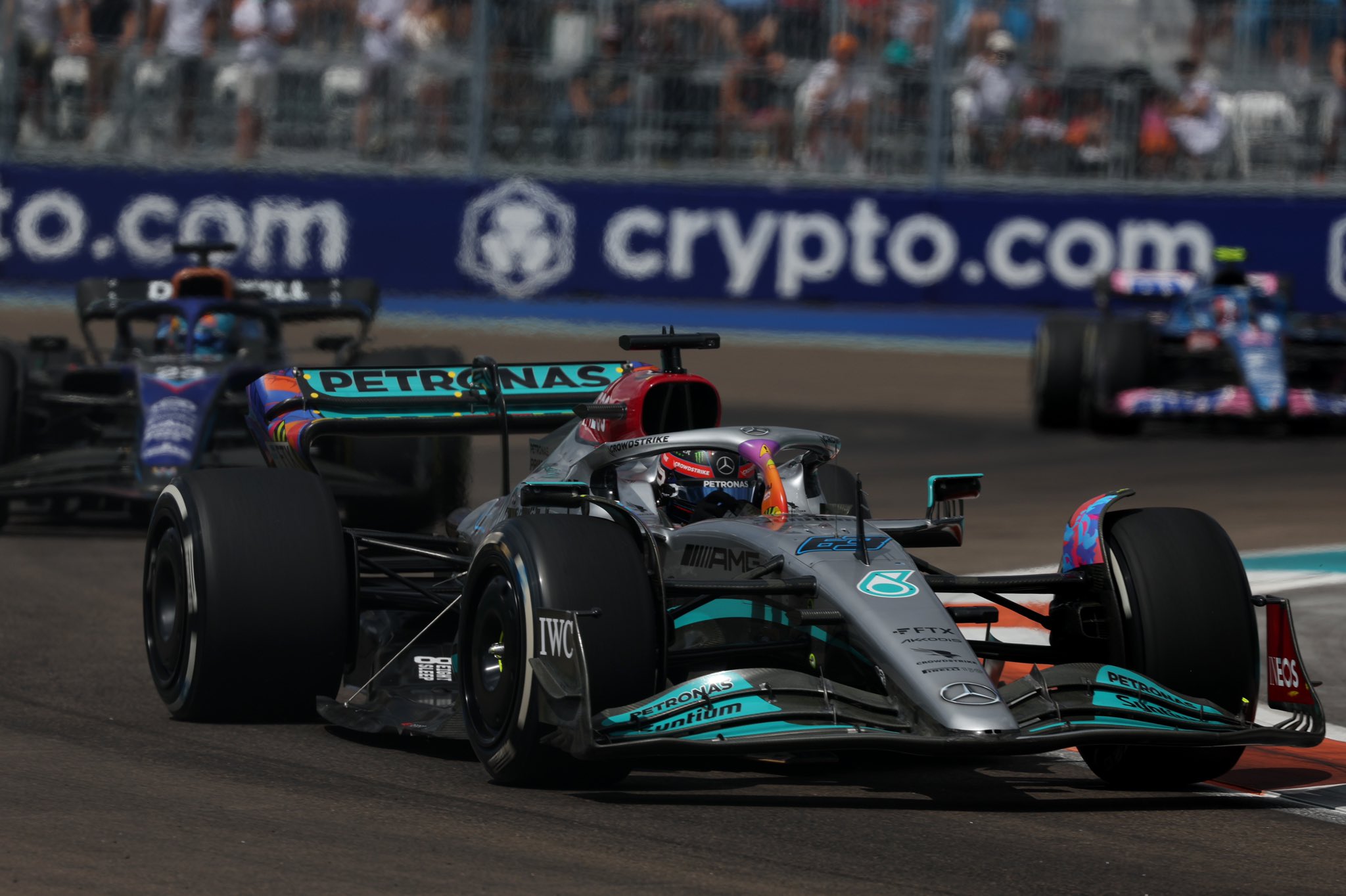 Esteban Ocon was probably the Driver of the Day, from the back of the grid the Frenchman soldiered on to make his way to eighth place, beating teammate Fernando Alonso who was again in the wars, a penalty cost him points – the veteran was ninth.

Alex Albon also rose through the attrition to bag the final point for Williams with tenth place in the worst car on the grid, another Russell-style performance from the Thai driver making his comeback this year after a year layoff.

Other Miami Grand Prix cameos worth noting were: 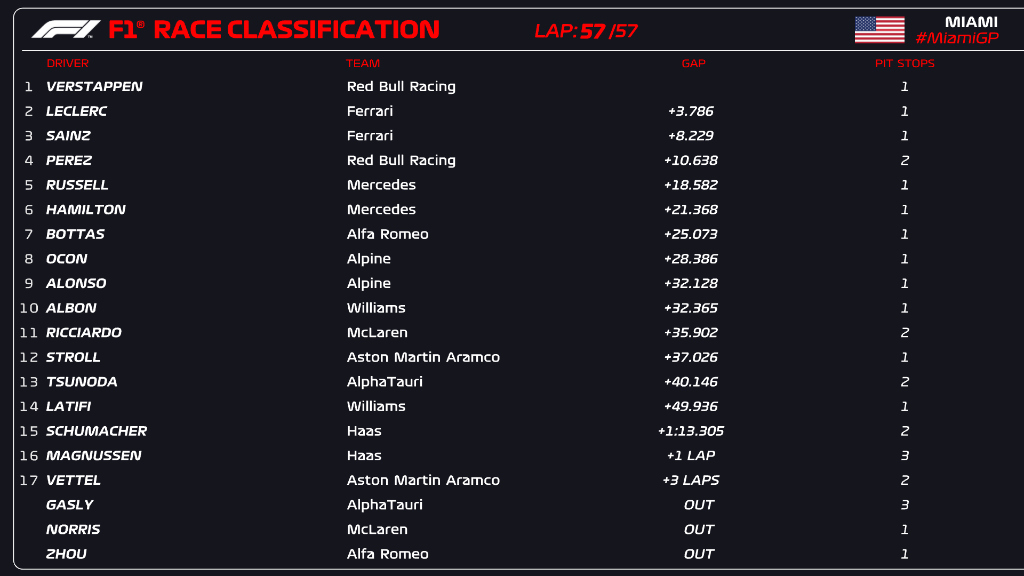 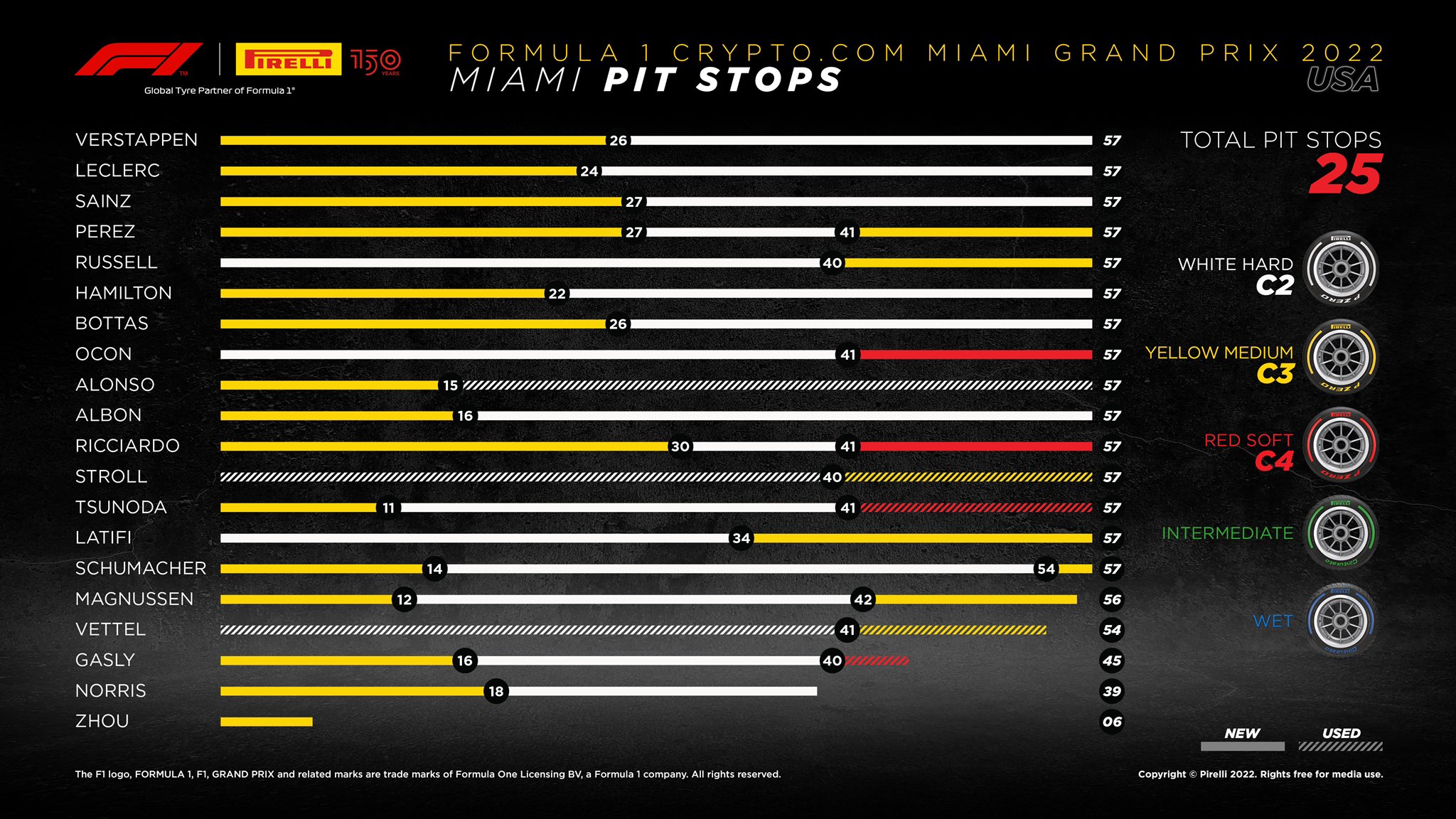 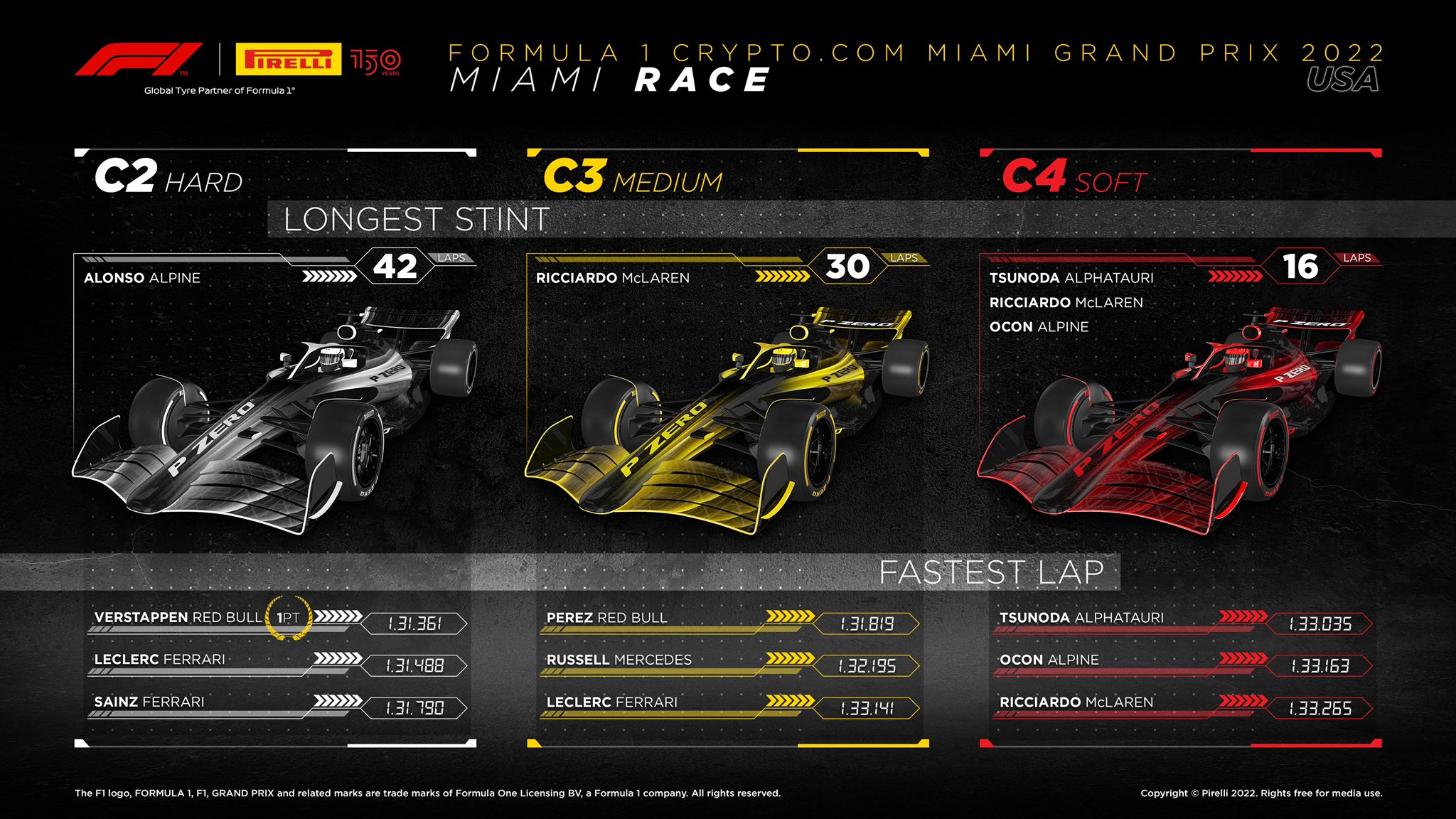