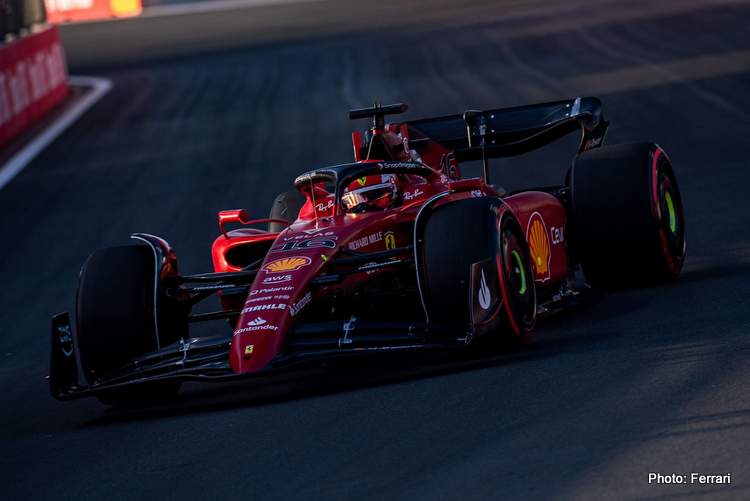 Formula 1 was back to running for the final practice session of the 2022 Saudi Arabian Grand Prix, after a tense Friday in Jeddah, with Charles Leclerc fastest ahead of the Red Bull duo.

Charles Leclerc made it three out of three, going fastest in FP3 for the 2022 Saudi Arabia Grand Prix, after being fastest as well in the first two practice sessions, but Max Verstappen was not far off in second, which sets the scene for a thrilling showdown between the two drivers in qualifying.

Friday was tense around the Jeddah Corniche circuit, due to the unfortunate events that took place next to the track, with missiles being launched on an Aramco facility nearby causing a huge fire to erupt.

Discussions went on between the teams, both drivers and team principles, the FIA, Formula 1 management, the local authorities to decide how the event will move forward, as the 20 drivers in particular expressed safety concerns, with their meeting going on till the late hours of Friday night before a decision was made to push on with the race weekend.

The first day of practice was dominated by Ferrari with Red Bull not far off, as Charles Leclerc topped the first two practice sessions while Max Verstappen was second fastest on both occasions, as Mercedes continued to struggle with their car.

Ferrari will be looking to make up some of track time lost on Friday due to their drivers’ incidents that didn’t allow them to make any long runs.

With 24 minutes remaining from FP3, Pierre Gasly’s AlphaTauri broke down as he was heading out to the track but still within the pit exit, the Frenchman assisted by the track marshals rolled the AT03 back to the pitlane, the incident not causing any stoppage.

Gasly comes to a halt in the pit lane exit

The finishing order after FP3

Leclerc’s best at the end of FP3 was 1:29.735 after a last minute effort from the Monegasque, but his rival Max Verstappen was only 0.033s behind in the Red Bull.

Valtteri Bottas was superb again putting his Alfa Romeo in fifth place with a 1:30.030, and was followed by Esteban Ocon in sixth, the Frenchman a tenth adrift from the Finn.

Pierre Gasly took seventh in the AlphaTauri despite his break down in the pitlane mid session, and was followed by Kevin Magnussen, eighth in the Haas, the Dane recovering from his Friday troubles  and 0.527s off the pace on a track he has never been to before.

Fernando Alonso put the second Alpine in ninth, as Yuki Tsunoda followed him in tenth, the Japanese 0.119s further behind the Spaniard.

Mercedes and McLaren on worrying form

The best of the Mercedes pair was Lewis Hamilton in 11th almost one second off the pace and still suffering from “porpoising” on his W13, as his teammate George Russell was down in 14th 1.248s off the pace.

Is this is their real pace, the are going to endure a painful qualifying around the Jeddah Corniche Circuit.

P11 and P14 for Lewis and George in FP3. Work to do before qualifying. pic.twitter.com/3jl9AavEz1

After showing some promise on Friday, McLaren went back down the order in FP3, with Daniel Ricciardo their highest finisher in 16th place 1.451s off the pace as Lando Norris was painfully down in 19th, the Briton 1.794s too slow.

Tough times for the Woking squad, as the picture seems grim for them come qualifying in Jeddah. 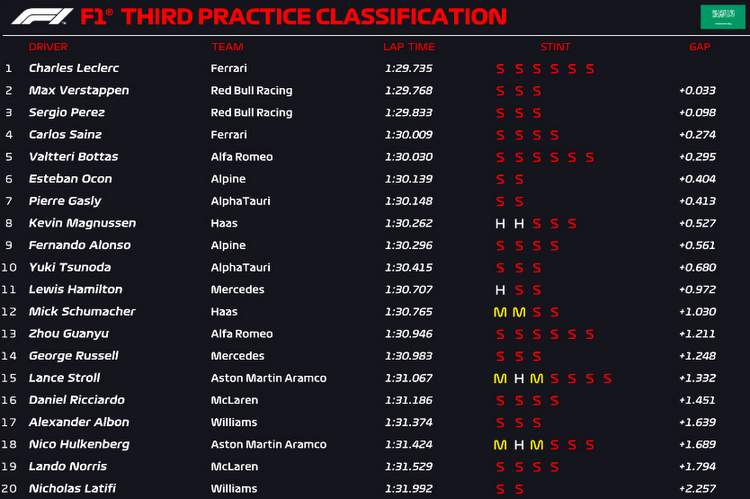