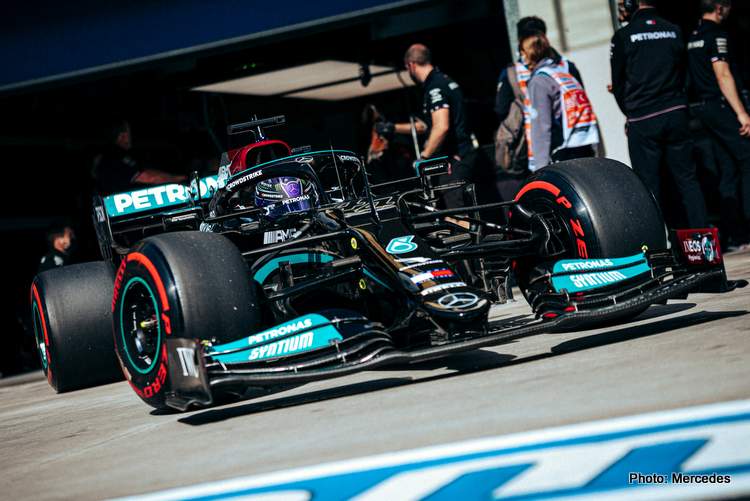 So big are the new regulation changes F1 is implementing in 2022, that their will be no aspect of the sport that will not be affected, having to adapt to new challenges and operating limitations.

Mercedes’ Andrew Shovlin, elaborated on how the changes for this year will affect the way his team, and all the others in that regards, go racing.

“2022 is going to be an exciting challenge for the engineering group, trying to understand the effect of all those changes, very big aerodynamic changes,” Shovlin said in a video on the team’s YouTube channel.

“The whole aerodynamic behavior of the car has been reconsidered in the regulations to try and make them more able to follow closely, to give us better racing.

“We’ve also got very very different tyres so all of that needs understanding and we can start that work here in Brackley on the simulator but as I said, it’s really trying to understand how the new cars will generate performance.

“We’ll run them quite differently to the cars that we’re used to,” he went on. “The previous cars were all very much an evolution. We also need to understand how the tyres will generate performance, what sort of regime do we need to operate those in in terms of temperatures, how do we get best grip.

“So those are all questions that we can start answering here on the simulator, but then also on the track with such wide ranging changes to the technical regulations, there’s a lot of learning that we’re going to have to do at the circuits and when you get a new car, you’re always learning trying to understand how to get it in the sweet spot, how to get the drivers completely happy with the balance for that all-important lap in qualifying,” Shovlin explained.

The learning curve will be much steeper

The Mercedes director revealed that “the learning curve here is going to be much much steeper” with the team finding “real lap time hopefully with every run”, with the learning process going from one race to the other as they would have to “go through that process of understanding the limitations, working on the fine-tuning” with every new track they visit.

He also stressed the importance of having a proper a correlation between the track, simulator and the wind tunnel, which in his opinion is a “key element”, which makes the work the team can do “away from the circuit is really valuable” in understanding the setup, and putting in virtual miles which is not possible on the track.

“The big difference for 2022 is just how steep that learning curve is going to be,” Shovlin said. “There’ll be a lot more lap time difference between getting it right and getting it wrong and that’s why it’s super important that we can start with good testing through the winter, try and build up our confidence in that correlation and then carry those tools and deploy them into the race weekends.”

The Mercedes engineer warned that the new format to applied on Friday will be a challenge to adapt with, while Saturday and Sunday will remain unchanged.

“The race weekend format itself changes quite considerably,” he pointed out. “The purpose there is trying to give the teams less time to work on the cars, give them more time away from the tracks and this is really coming from the fact the calendar is getting busier and busier.

“They’re adding more and more races and we need to make sure that we’re not working people too hard so the weekend starts starts later.

“The biggest changes are actually on the Friday where the first session’s at two  o’clock and the final session is at five o’clock running from five o’clock till  six o’clock. And in Europe the track’s going to be cooling down at that time of day, and then you’ve got much less time on the evening.

“You’ve only got three hours where the mechanics will be working on the car. The teams will be allowed to stay in the offices for five hours but actually that’s still giving us quite a lot less time than we’ve normally got, and in that period you’re trying to get the car specification finalized.

“You’re trying to collate all the learning from the running that day, trying to refine the setup and come up with the base setup that you’re going to carry into Saturday and into qualifying,” Shovlin admitted.

Sprint races are in doubt this year with big teams asking to be allowed to spend more money on them, but if they remain, Shovlin is also wary of the challenge they create as getting the car in a short time was difficult enough with the old generation F1 cars, which the team is familiar with, unlike the new ones which will be more difficult to set up properly in such a short time.

Are these cars going to give us better racing?

“They should certainly be improved,” Shovlin claimed. “A huge amount of effort has gone into these regulations, trying to mean that the car in front doesn’t disrupt the airflow for the following car.

“That will allow the driver to stay closer and the closer you can get, the more likely you are to be able to overtake.”

But will overtaking become easier in a track like Monaco? Shovlin points out:  “In reality that’s quite unlikely.

“The straights are too short, the track’s too narrow, there really isn’t any easy place around Monaco to overtake. But what we’ll probably see at lots of the other circuits is that you can follow more closely, you can put the car ahead under pressure.

“It’s easier to get within an undercut range and importantly there will be straights now where hopefully you can
make a passing maneuver stick, whereas previously it wouldn’t have been practical, so all of that, we’ll start to get a flavor for it in Barcelona, in Bahrain, but really it will only be when the lights go out for that first race that will know whether this project has been successful in that very specific regard,” he added.

Shovlin also emphasized the importance of reliability, as the radically different new cars meant that not many parts could be carried over from last season which meant many new parts, whose reliability needs to be proven.