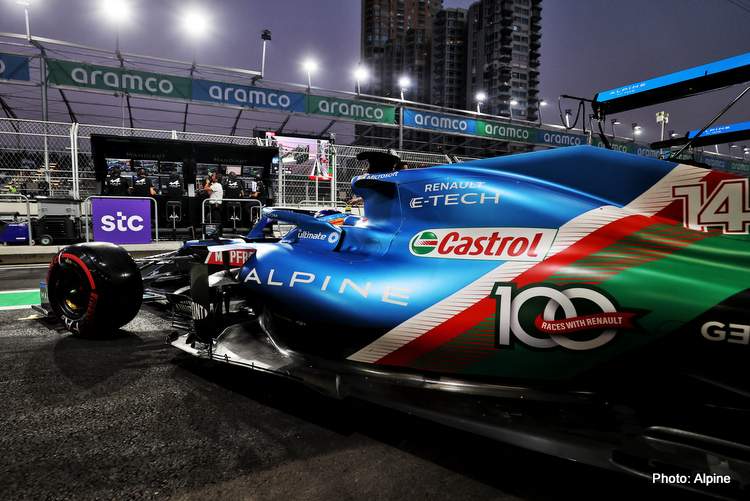 Alpine F1 team announced today that BWT, the former sponsor of Aston Martin, has joined the French Formula 1 team as a title sponsor.

Ever since Aston Martin announced that Otmar Szafnauer will be leaving his role as team principal early in January, rumors have been circulating that BWT would be leaving along with him, with the destination being Alpine. Rumors have also mentioned that Szafnauer would resurface at Alpine, but nothing has been announced yet in that regards.

Alpine as well has been undergoing a management upheaval with Executive Director Marcin Budkowski and team advisor and non-executive board member Alain Prost leaving the team, the latter’s exit quite acrimonious.

The French team announced that BWT, an Austrian water treatment supplier, will become the team’s title sponsor having signed a long-term strategic partnership. The announcement did not specify the exact term of the agreement however.

Aston Martin launched their 2022 F1 car on Thursday, with the pink – a renowned color of BWT – missing from the team’s new livery. BWT has served as a long term sponsor for the Silverstone-based outfit since they raced under the Force India name, and remained onboard as the team went into financial troubles before being reborn as Racing Point after being purchased by business consortium lead by Canadian billionaire Lawrence Stroll, to be later rebranded as Aston Martin in 2021.

Alpine F1 Team and BWT, one of the leading suppliers of water treatment systems worldwide, are delighted to announce a strategic, long-term partnership. BWT becomes the title partner of Alpine F1 Team from the 2022 season onwards, with the team becoming BWT Alpine F1 Team.

Alpine has committed to use BWT’s iconic pink branding to spread the message of sustainability and social responsibility further around the world, utilising the combined global platforms of Formula 1 and the automotive industry. The pink colour symbolises BWT’s mission to ‘Change the World – sip by sip’ and to make it a little bit better every day by implementing the Bottle Free Zone concept.

For Alpine this is a major new step forward as it aims to challenge for the championship within 100 races into this new regulations era. Since entering the series in 2021, Alpine has proved itself to be a dynamic and agile team capable of racing at the front and punching above its weight, on and off track. It has also made a commitment to use the unique platform of Formula 1 and the car industry to bring prominent social matters to the fore.

BWT – Best Water Technology – Europe’s market leader in water treatment, continues the mission to provide water of perfect quality for all purposes, everywhere in the world, directly from the tap, the water dispenser, or the table water filter. With innovative, patented BWT technologies, local water is filtered and at the same time enriched with valuable minerals and trace elements such as magnesium, zinc, and silicate, saving the time and energy-consuming transport, storage, and disposal of water bottles.

Alpine F1 Team and BWT are dedicated to working collectively to analyse its impact on the wider world and drastically reduce its carbon footprint across its respective fields. An elimination of single use plastic consumption is just the first step.

Cédric Journel, Alpine Sales and Marketing Vice President, said: “We are excited to announce that BWT will be the title partner for Alpine F1 Team for the next years. Both Alpine’s and BWT’s sustainability agendas are fully aligned on eliminating single use plastics and we are pleased to join forces to convince many people around the globe, our employees, partners, customers and fans to reduce plastic waste. In parallel we will use the huge global platform F1 provides to support BWT in their fight against the unfair distribution of clean, safe and healthy drinking water.”

Lutz Hübner, CMO of BWT, said: “We are proud to become part of BWT Alpine F1 Team as its title partner. With our unique and patented water treatment technologies and Alpine’s large global following, we can help to ‘Change the world – sip by sip’. The first stage will be to create BWT Bottle Free Zones across all the Alpine factories and at race events. The joining of forces to increase awareness, as well as to fight for sustainability, aligns BWT and Alpine perfectly. Besides that, BWT has been investing for more than two decades in the development of membranes for our future hydrogen-powered economy. We are meanwhile one of the world’s leading suppliers in membranes for the production of green hydrogen and in membranes for fuel cells – the energy converter of the 21st century. Together with our new partners, we will contribute to emission-free racing and sustainable fuel cell electric mobility.”

Not long now until we meet the #A522 pic.twitter.com/wZuebIHJFW