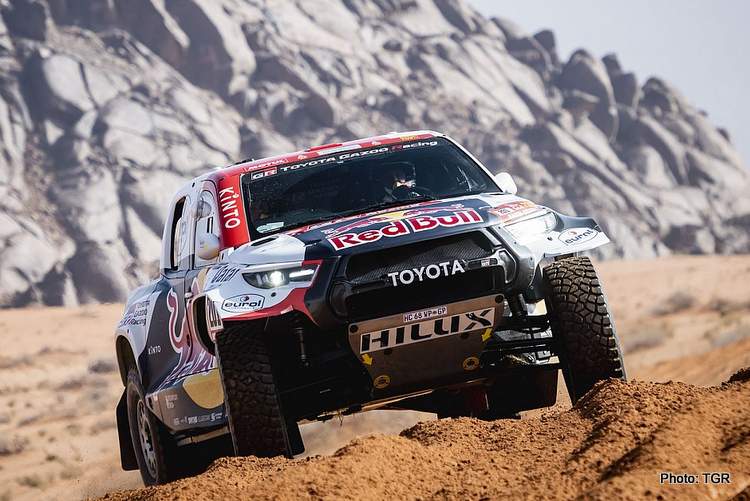 Stephane Peterhansel’s hopes of defending his Dakar Rally title effectively disappeared on Sunday after the Frenchman’s electric Audi suffered a smashed rear axle on the first stage in the Saudi desert and he lost more than five hours.

While Qatar’s Nasser Al-Attiyah continued his form from Saturday’s prologue to stretch his lead to 12 minutes 44 seconds, 14-times Dakar winner Peterhansel had to wait for assistance.

The French veteran had been in second place at the first waypoint but the challenge fell apart some 153km into the 333-km loop around Ha’il.

Triple champion Al Attiyah thanked co-driver Matthieu Baumel for keeping him on the right track over the rocky and sandy stage.

“Really it was a very difficult stage,” said the Qatari. “It’s not easy… Mathieu did a really good job in navigation. We saw a lot of lines gone too much to the right and Mathieu said ‘no, you need to be left’.”

Peterhansel’s teammate Carlos Sainz, a three-times Dakar winner who was second after Saturday’s prologue, lost his way in the desert and ended the day more than two hours adrift of Al Attiyah.

Audi, who also have Sweden’s Mattias Ekstrom an hour and a half off the pace, seeking to become the first manufacturer to win the Dakar with an electrified powertrain but the challenge looks over for this year.

Their Audi RS Q e-tron also features a petrol engine to charge the car’s batteries during the longer stages of the two-week endurance event.

In the motorcycle category, Australian Daniel Sanders remained the overall leader for the GasGas team after winning the stage more than three minutes clear of Chilean rival Pablo Quintanilla.

“The FIA trusts the local authorities to get to the bottom of what happened and to continue to ensure the safety of the race in link with the organisers,” the governing body said in a statement.

New FIA president Mohammed Ben Sulayem was present at the start of the first Dakar under his watch.

Monday’s second stage is a 338-km timed run featuring a chain of dunes on the way to Al-Artawiya. (Reporting by Alan Baldwin)

🎙 First reactions of Nasser @AlAttiyahN after Stage 1B! The Qatari driver and his co-driver @matthieubaumel take the lead in #W2RC 💪#FIA #Dakar2022 pic.twitter.com/Lc1WzjEbpM