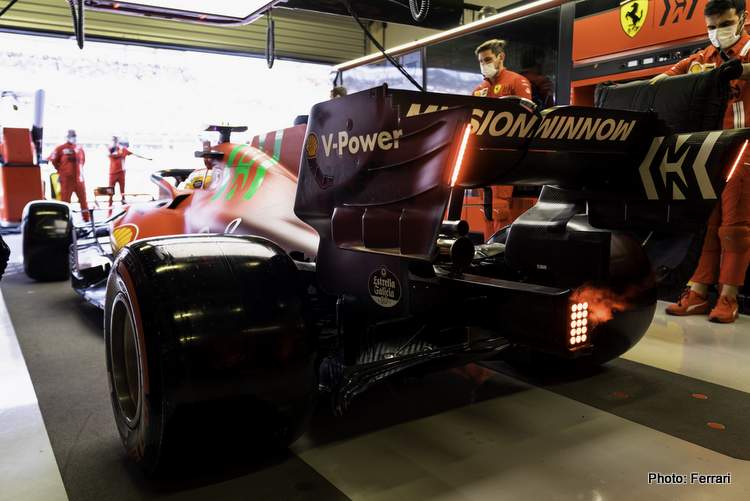 Ferrari look set to secure third in this year’s Formula 1 Constructors’ Standings, and according to Mattia Binotto, the reason behind that is the team gelling together, and not the car which he claims was never really developed.

Third in the Constructors for a team of Ferrari’s pedigree should not be a reason to rejoice, but considering that it came on the back of one of their worst seasons in F1 (2020), where they finished sixth with 131 points only, the fabled Italian team happily took it.

Third was never a target

Despite initially estimating that they might be in a shot for third, Ferrari did not set that as a target, but it happened regardless due to many factors, which the team boss claims are not car-related.

“We never really developed the current car,” Binotto told Motorsport Total. “We introduced a few developments at the beginning of the season and that was it.

“So all our efforts from the beginning were focused on the 2022 car,” he insisted. “We never compromised on that.”

Even their midseason power unit upgrade was done with an eye on 2022, with Binotto saying: “It never occurred to us at any point to try to disadvantage 2022 in favor of 2021.

“We knew from the beginning of the season that we would be able to fight for third place,” he revealed. “We knew it could have been very close, but our main goal for 2021 was not third place.

The team improved and not the car

The Swiss-born Italian revealed that while their SF21 was not developed, whilst the team as a whole has developed in how it operates.

“We wanted to try to improve as a team in all details, and third place was simply a result of that,” he pointed out.

And third came as a result of “the team, the way it works on different weekends, has improved a lot since the start of the season, and not because the car itself has improved.

“I think the race team has made great progress since the beginning of the season,” Binotto claimed.

“It has made great progress in terms of strategy, the way we manage the weekend, communication with the drivers and understanding what we are doing. Tire management has also improved a lot.”

Ferrari have notably struggled in Paul Ricard, France this year with Carlos Sainz and Charles Leclerc finishing 11th and 16th respectively after a run of strong results in Monaco and Baku earlier, with the team saying at the time that they have identified the reason behind their French struggles, and addressed them.

“Since Paul Ricard, the team has developed many small tools and methods to do better,” Binotto confirmed. “I think overall the team is making progress, and that’s great, especially in terms of what we’re trying to do in 2022.”

Recalling the team’s miserable 2020 campaign, the 52-year old said: “When I look at where we were last year, sixth, with few points in the championship, we did the best we could with the current regulations and this year’s car with the very limited development possibilities.

“I’m very happy about it, because yes, third place is a great result of our efforts,” Binotto concluded.

After having a close fight with McLaren over third place in the Constructors’ table, Ferrari have pulled out a 39.5-points gap with two races to go, which means that they have all but secured best of the rest status.

But is that good enough for F1’s most successful team? 2022 can’t come soon enough.