Leclerc: Nothing to be excited about when you finish P8 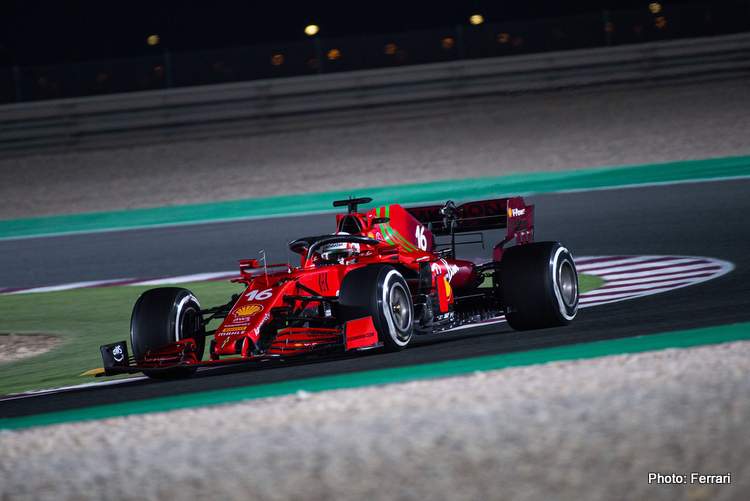 Ferrari didn’t have a smooth 2021 Qatar Grand Prix weekend, especially Charles Leclerc who qualified 13th but finished in eighth, something he is not excited about.

Well said from the Monegasque, as a team of Ferrari’s caliber should not be excited about a “seventh and eighth” race result (Carlos Sainz finished seventh in Qatar), nor rejoice when they achieve a targeted third in the Formula 1 Constructors’ Championship.

But it is what it is, and in this context, the Scuderia left Qatar with a healthy points haul, that will help them secure third in the Constructors’ on a day where McLaren fumbled again scoring only 2 points, which Leclerc echoed in his post-race team media brief.

“As a team, we ended the weekend on a positive note,” he said.

“Personally, I was happy to see my pace return after quite a frustrating qualifying,” Leclerc went on, hinting at his baffling lack of pace in qualifying on Saturday, which turned out to be caused by a damaged chassis.

“I would like to thank our mechanics for the incredible job they did in changing my chassis yesterday. From the first few laps of the race, the feeling I had in the car was already much better and I knew that I could push,” the 24-year-old revealed.

“In terms of the overall result, there is nothing to be excited about when you only finish in P8,” Leclerc declared bluntly.

“But considering that I started from a long way back and looking at the strong pace I had, especially in the second stint on the Hard tyres, I think we made a really good recovery.

“We will now do everything we can to carry this momentum into the final two races of the season,” the winner of two grands prix concluded.

The Spaniard barely made it into Q3 in Saturday and barely escaped a grid penalty on Sunday from the yellow flag debacle to which Max Verstappen and Valtteri Bottas fell prey on race day.

That meant that Sainz started the race fifth after qualifying seventh, where he eventually finished.

“It wasn’t the most entertaining race today for us due to the amount of tyre management we had to do,” Sainz said of his race.

“However, we did a good job and managed to finish on the one-stop strategy, despite the doubts we had prior to the race.

“As expected, the race start on the Medium tyre was tough for me and I struggled to fight with the cars around me,” he revealed. “From there I just focused on extending the first stint to the maximum and then taking care of the Hard tyre during the first laps of the second stint.

“When I was told we were safe to push to the end I finally had some fun, catching Ocon and Stroll ahead of me.

“However, being stuck in a DRS train made it impossible to overtake so that was it,” the Spaniard lamented.

“Overall it’s been a positive triple-header, where I’ve felt confident and fast in the car in every session and race.

“We have also increased our lead over McLaren so we can be happy about that. Before tackling the last two races of the season a bit of rest is much needed, especially for the mechanics and every member of the race team. Thanks for all the effort guys!

“Finally, congratulations to Fernando today! Great to see him back on the podium,” the 27-year-old concluded heaping praise to his compatriot Fernando Alonso who made a return to the podium in Qatar.

And the team boss said…

The Scuderia’s result around Losail, sees them increase their lead over McLaren to 39.5 points, with two races remaining only, making third in the Constructors’ Table even more tangible.

Team Principal Mattia Binotto said: “A result to be viewed in light of the championship, which has seen us take another step forward towards the goal we have set ourselves for this final part of the season.”

“Now we will briefly pause for breath before aiming to finish the season on a high note,” he concluded.

The third chapter of the triple-header has come to a close, a huge thank you, #Tifosi for your constant support ❤️✨@Charles_Leclerc @CarlosSainz55#essereFerrari 🔴 #QatarGP pic.twitter.com/805uEJEYoi