Inside Line: The day Wolff barked and Bottas jumped 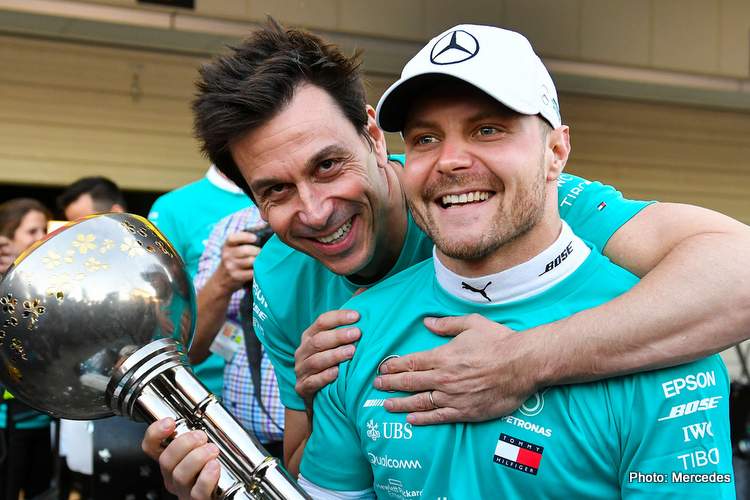 “Come on Valtteri, overtake these cars,” barked Toto Wolff in Valtteri Bottas’ earphones during the 2021 Qatar Grand Prix, and as if suddenly switched on, the Mercedes driver scythed his way through the field, looking set for third place, until fate decided otherwise.

Personally, I was astounded by how that command galvanized the Finn on Sunday night at Losail. After qualifying third on Saturday, shenanigans during a yellow-flag period late in Q3 earned him a three-place grid penalty.

From fifth on the grid, things got substantially worse after the start, Bottas explained after the race: “I struggled on the formation lap to get temperature into the tyres and then being on the dirty side of the grid, I had no grip for the start, so I was just wheel spinning, and was skating around on the first lap.”

So much so that by the end of the first lap he was dawdling around in eleventh.

Dawdling? Yes, he remained there for the next half dozen laps in the mighty W12, which in Lewis Hamilton’s hands was leading and, memorably, how the Briton had used it to such good effect in Brazil, the #44 slicing upfield like a hot knife through butter for that famous win.

Not so with Bottas in Qatar until, of course, Wolff got on the radio to give his man the hurry up, and suddenly Bottas was rebooted from cruising to cruise missile. By lap 23 the Mercedes number two was third! Overtaking rivals on just about every lap thereafter. It was like an On-Off switch.

That got me thinking about people management.

Having managed big teams of photographers, during my days as a photo editor, you get to interact with all types. Each individual on the team – photographers and assistant editors – needs different treatment to bring out the best in them.

If you have brought up kids, you will know. Same principle. For some, tough love works.

Among these are stereotypes. Snappers who are great but need regular reassuring, or a few stern words to get them operating at their highest level. For me that was the challenge, making the most of each one’s strengths and needs, to have them perform at the top of their game.

On Sunday evening, Wolff’s hurry up call followed by Bottas suddenly finding his A-game suggests he may have been neglected on that front. Possibly he needed more from his boss prodding him and urging him along, barking.

The Mercedes F1 boss has been in his corner before Valtteri got his Formula 1 break. At the time, Wolff had a lot to do with his charge making his debut with Williams at the 2013 Australian Grand Prix.

And of course, four years later, paving the way for Bottas to join Mercedes when Nico Rosberg bailed out after winning the title in 2016.

But it did not take Wolff long to mismanage his driver by offending him irreparably with the ill-thought “sensational wingman” quip – make that a slap in the face – after Bottas gamely fended off a couple of Ferraris allowing Hamilton to win the 2018 Hungarian Grand Prix.

That statement stung and Bottas said as much at the time: “First of all, wingman hurts.”

Sadly, the tag has stuck with him and will probably be rolled out for the rest of his life. He can thank Wolff for that.

The harsh reality for Bottas (then and now) is that Mercedes was and is built around Hamilton, and rightfully so because he delivers relentlessly. Stats show that the #77 car won ten races since 2017, while the #44 crossed the line first 81 times!

But Sunday’s wake-up call suggests to me that Wolff, apart from the “wingman” faux pas, may have also been neglectful as a manager by not giving Valtteri tough love enough times – a driver who clearly thrives on someone caring, and it being the boss was the only fillip he perhaps needed to raise his game.

A podium beckoned until Mercedes botched the math, on lap 33, Bottas’ car suffered a blowout, his team kept him out a lap too long and resulted in a DNF.

Bottas took it on the chin and said after the race: “I had the puncture without any vibration or warning. We knew we were pushing the limit of the tyre, but I was still getting good grip, we still felt comfortable and staying out was our best shot at a podium.”

With two races left for him as a Mercedes driver, before heading off to Alfa Romeo for 2022 and beyond, it is fair to ask: What went wrong for Bottas with the World Champs?

After all, he has been in the best car on the grid for five years but never truly looked like a challenger.

I will venture that a big part of the reason for this, we saw on Sunday, is because Wolff did not bark at Valtteri enough times. Simple.

A tough Sunday in Qatar, but we know you’ll come back fighting, VB! 💪 Maximum attack for the last races 👊💙 pic.twitter.com/8VSTAoZeYs