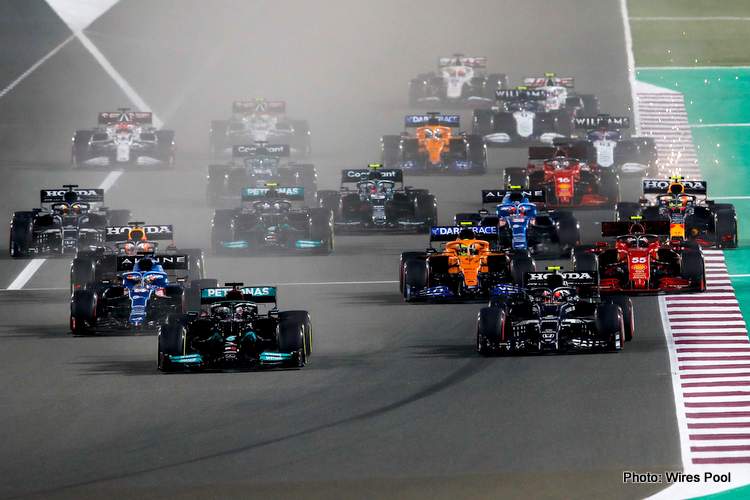 Lewis Hamilton’s quest for an eighth Formula 1 World Championship title received a massive boost as the Mercedes driver powered to a dominant victory at the 2021 Qatar Grand Prix.

After securing his 102nd career pole 24 hours earlier, the Briton cruised from pole to his 102nd Formula 1 victory and narrowed the gap in the Drivers’ Standings to eight points from 14 a couple of hours earlier. Two rounds remain.

As in Sao Paulo, Hamilton was imperious in the Mercedes on a track that has suited the W12 to a tee, and thus the Briton has the honor of winning the first Grand Prix in the country, at Losail International Circuit.

Hamilton said in parc ferme: “It was pretty straightforward, it was pretty lonely at the front. Of course, I enjoy those races where you’re battling through but we needed those points today, so I think a real solid job from the team. I can’t wait to watch the replay of the race to see what happened behind me.”

“I’m really grateful for the points, it’s been a hell of a year. To be at this point in the season and have back-to-back wins is a great great feeling and puts in good stead for the next two.”

Championship leader Max Verstappen turned seventh on the grid to second place by the end of the night, with Red Bull teammate Sergio Perez recovering from 11th on the grid to take to fourth on a good day for Red Bull’s Constructors’ Title ambitions.

Verstappen summed up his evening: “Of course our starting position was a bit compromised but we had a really good start and then came back to second. At the end of the day to get that fastest lap was very nice. I know it’s going to be difficult to the end but that keeps it exciting. It’s going to be a tight battle until the end.”

Fernando Alonso took third place for Alpine, the Spanish veteran on the podium for the first time since 2014 after a gutsy and determined drive by the 40-year-old; ending a 104 race podium drought.

A beaming Alonso was clearly proud to be back: “Of course our starting position was a bit compromised but we had a really good start and then came back to second. At the end of the day to get that fastest lap was very nice. I know it’s going to be difficult to the end but that keeps it exciting. It’s going to be a tight battle until the end.”

A sharp start from P7 for @Max33Verstappen in Qatar! 🚦👌

In retrospect, it was a stalemate from the time Verstappen popped into second place

After an orderly start of the first Qatar Grand Prix today, it took less than half a dozen laps for Verstappen to nullify the five-place grid penalty he was handed for ignoring yellow flags during qualifying on Saturday.

Thus began his pursuit of Hamilton who set the pace from pole position on the Losail grid, by the time the Red Bull was second, the Mercedes was five seconds up the road.

The pair upfront were two seconds per lap faster than any of their rivals, trading fastest laps, as a game of cat and mouse ensued at that stage of the 57-lap-race, with Hamilton slowly edging away until Verstappen pegged the gap at about seven/eight seconds.

Red Bull pitted their man early and all Mercedes did is copy their rivals’ strategy by covering the pitstops as Hamilton did the rest, keeping his rival at arm’s length. In retrospect, it was a stalemate from the time Verstappen popped into second place until the chequered flag waved.

It took a wake up call from Mercedes boss Toto Wolff to catch a hurry up for Valtteri Bottas who had dropped from fifth out of the top ten. The Finn obeyed and ramped up his pace and was looking good for third until a puncture on the 34th lap cost him a podium and points.

Mercedes kept him out too long on the Mediums. From third he dropped down to 14th, limping home cost him dearly. The team eventually retired the #77 car for a DNF.

Puncture for Valtteri Bottas! He’s falling back through the field from P3 as he tries to make it back to the pits 👀#QatarGP 🇶🇦 #F1 pic.twitter.com/6crTO7zIl1

Bottas’ woes promoted Alonso to third place, the Spaniard delivering the Drive of the Day to score his first podium since the 2014 Hungarian Grand Prix, fending off Red Bull’s Sergio Perez, the Mexican recovering from 11th on the grid to fourth at the end of the race, to score a very important result for Red Bull’s F1 Constructors’ Championship.

The Mexican was looking good for third but a two-stop forced him late in the race to hunt down Alonso, which he could not do even with the fresher tyres. It was touch and go with canny Alonso nipping it in the end for a popular result.

Esteban Ocon made it a splendid evening for Alpine with fifth place, suggesting that victory in Hungary was no fluke and that the package has potential at the right venues, which Losail clearly was.

With his team mate Fernando Alonso up ahead in P3, @OconEsteban fought hard to keep a charging Sergio Perez at bay in Qatar! 👊#QatarGP 🇶🇦 #F1 pic.twitter.com/OPjeEoyTum

Ferrari got the better of McLaren tonight, but it was a disappointing Grand Prix for the two great teams, with Carlos Sainz leading home Ferrari teammate Charles Leclerc, seventh and eighth respectively.

Norris was best of the McLaren boys in ninth, with Daniel Ricciardo labouring to a disappointing 12th place on a forgettable night for them.

Alarm bells rang late in the race when the Pirelli tyres on both Williams burst, flinging debris on track, which prompted the late VSC periods to clear the track. 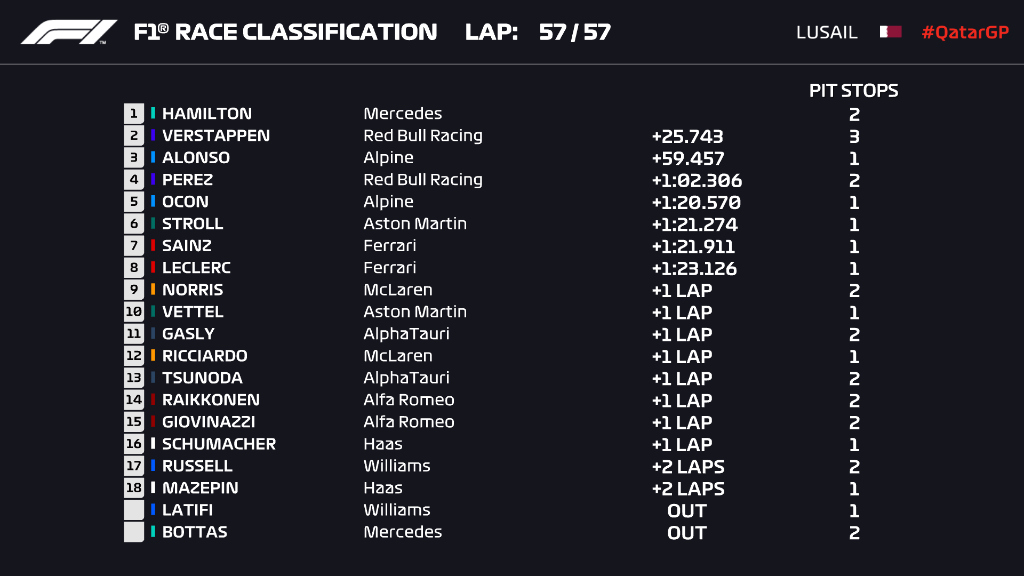 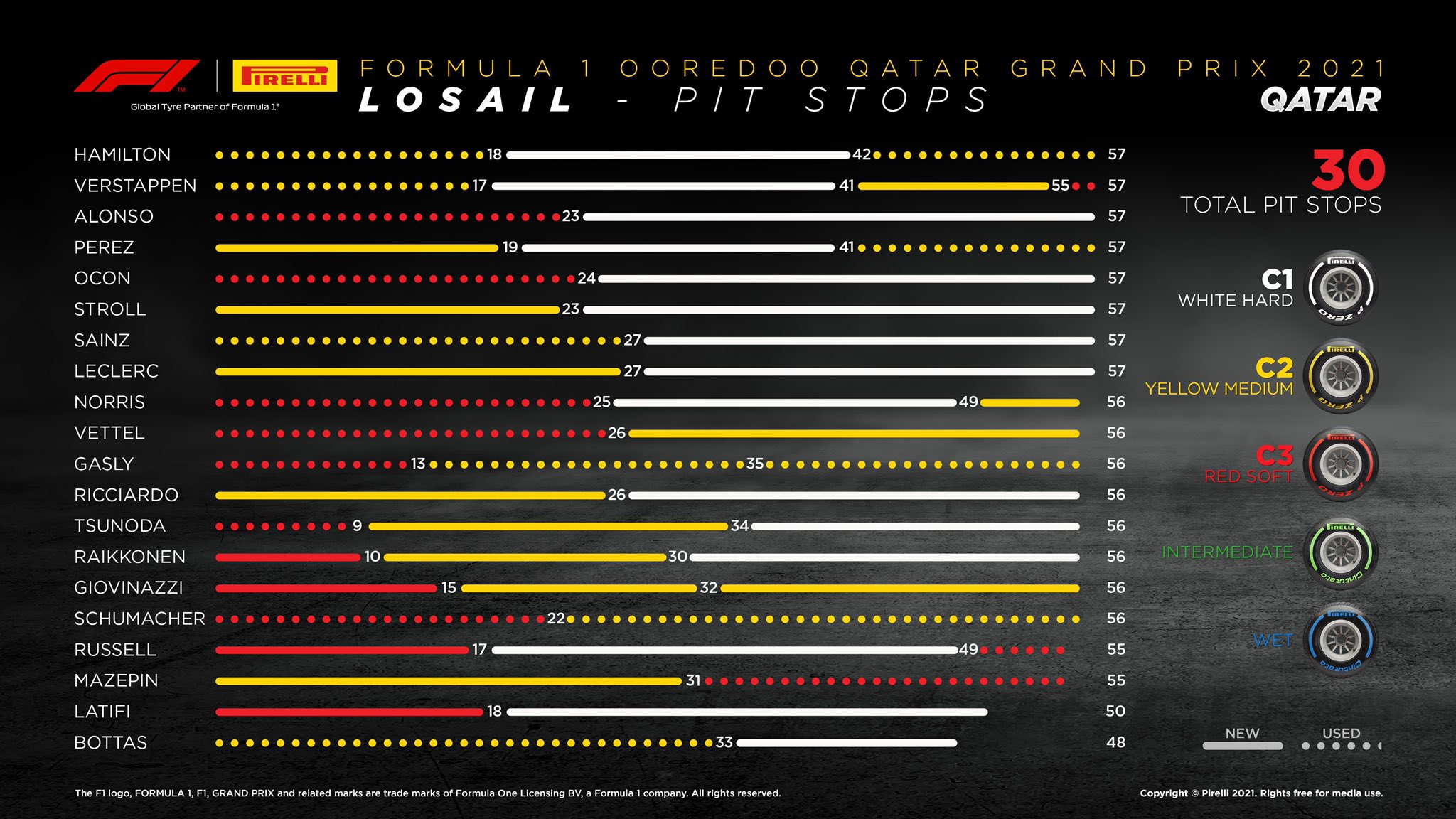 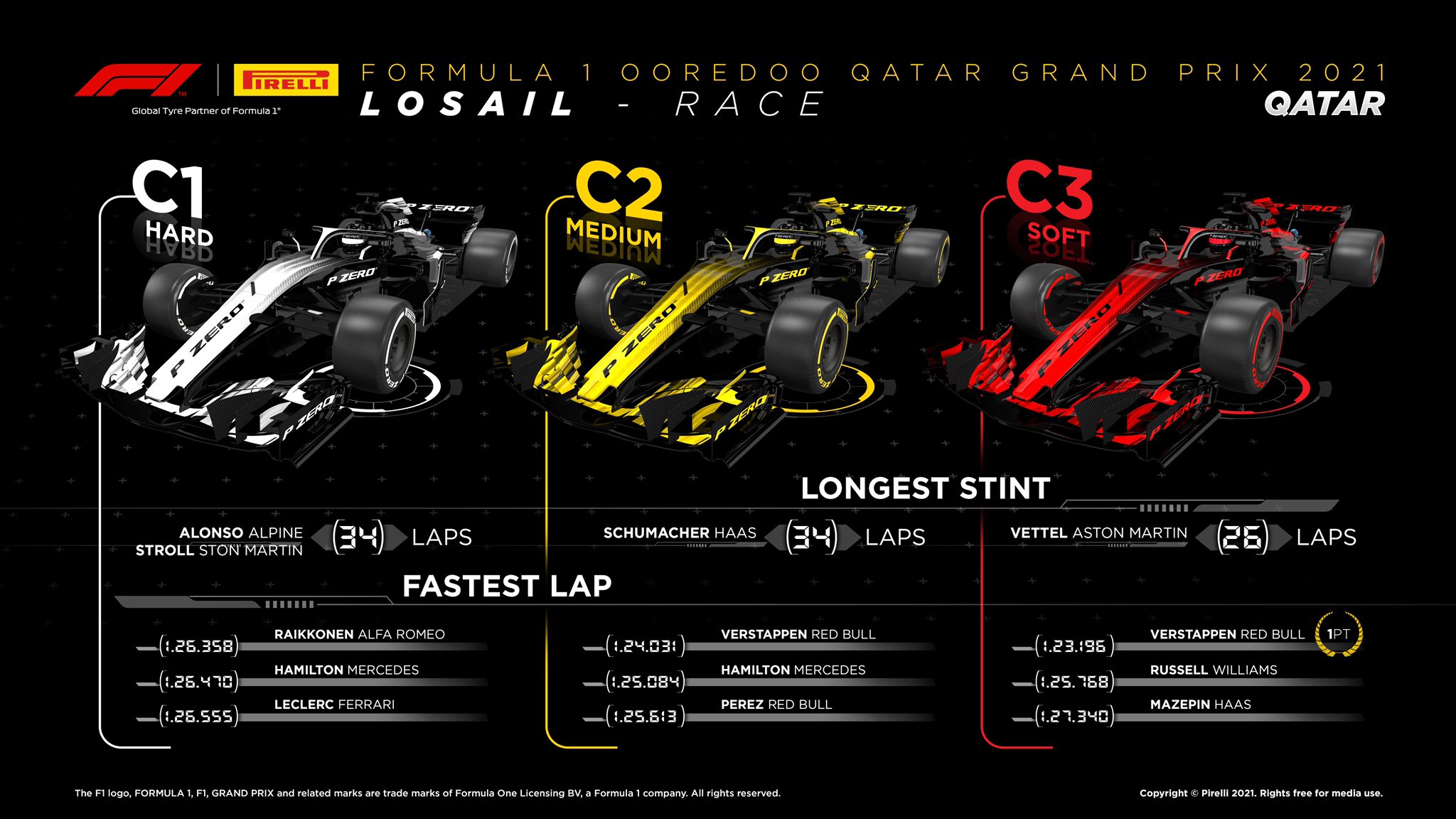 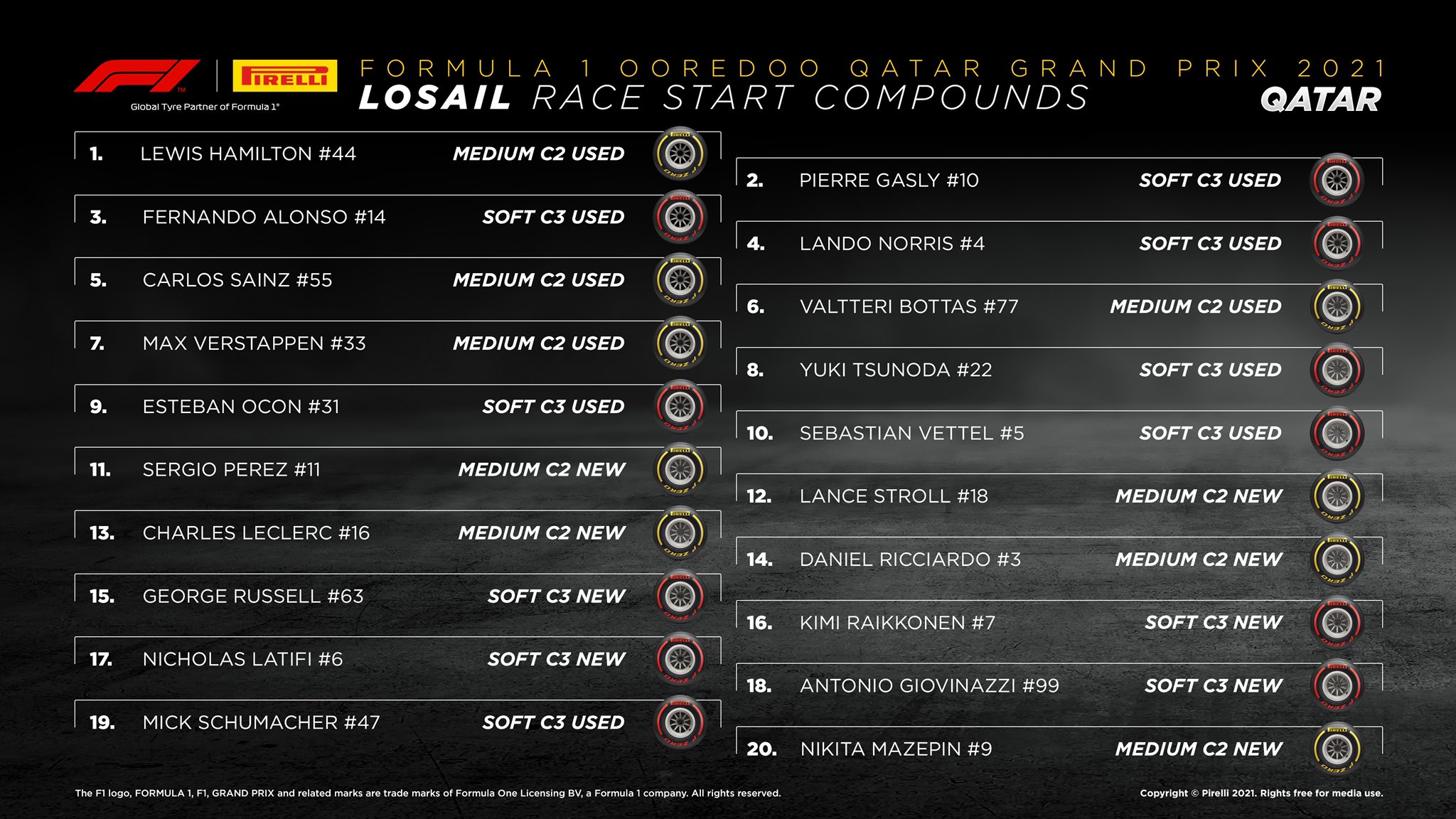 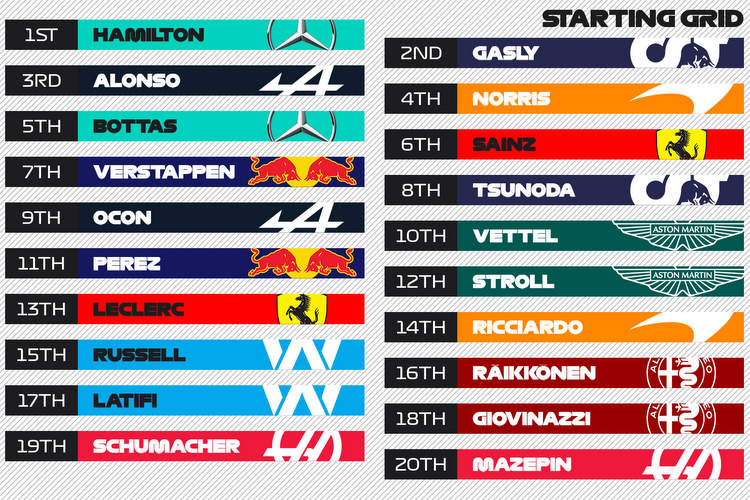