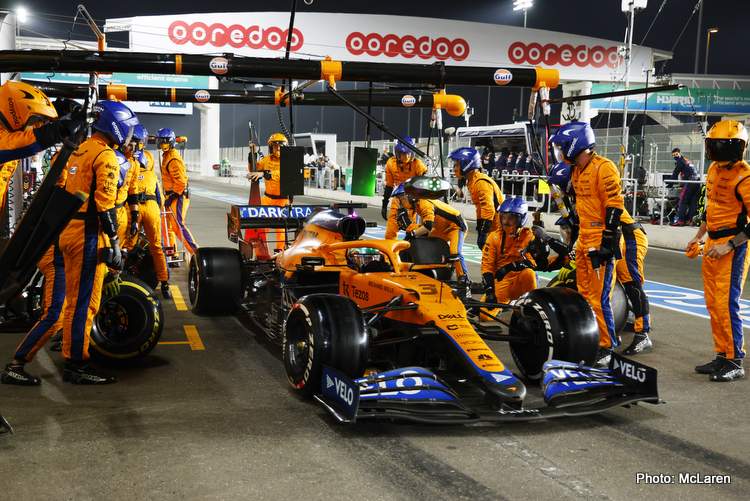 McLaren must be glad the 2021 Qatar Grand Prix is over, as it capped off a gruesome triple header that, according to Team Principal Andreas Seidl, didn’t go their way.

Over the last three races in Mexico, Brazil, and now Qatar, McLaren have been delivered a proper beating, having scored only 4 points, compared to 46 for their direct rival for third in the 2021 Formula 1 Constructors’ Championship, Ferrari.

That’s not what McLaren planned

The Woking squad’s team boss Andreas Seidl, admitted that wasn’t how they planned to go through the triple header, saying:  “This triple-header didn’t go our way.

Delving into the race details at Losail, the German revealed: “Lando drove a strong race today and looked set for P4 on merit, thanks to a competitive car, good strategy and an excellent pit-stop.

“A puncture took him out of contention, and he finished P9. When that happened, his Hard tyre had done fewer laps than the Soft tyre did in his first stint, so this was very unexpected,” Seidl insisted, before touching on Daniel Ricciardo’s race.

“For Daniel, it was always going to be tough to get into the points from P14,” he pointed out. “He drove a very strong first stint that pulled him up into contention, but then had to save an unusually high amount of fuel.

“We’ll have to investigate why that was required on his side,” the team boss revealed and went on to thank his team and partners as he usually does.

“My thanks to the entire team, who have worked incredibly hard, both here at the track and back at the factory, and our colleagues at Mercedes HPP, who have given us excellent support,” he said.

“Everyone has pushed very hard through this intense run of races.

We’ll go home now, reset, take a weekend off and try to finish the season on a high,” German concluded.

When it rains it pours… our streak of poor runs and bad luck continued in Qatar today. Disappointing result with Lando in P9 and Daniel in P12 but we’ll push hard right to the end. pic.twitter.com/jEgAylLVe9

Despite starting fourth after qualifying sixth, Lando Norris could not muster more than ninth, as he suffered a mid-race tyre puncture, something other drivers suffered as well, with the Pirelli tyres proving precarious around the Qatari venue.

“The car was very strong, I felt confident and we had good pace compared to everyone behind,” he revealed.

“Only Fernando [Alonso] had slightly better pace. I’m not sure we could’ve challenged for the podium, but we had good pace to go for P4, or at least P5, which would’ve been a great result for us.

“We lost that position through no fault of our own,” the Briton insisted. “It’s a huge shame, as the team worked really hard all weekend, but there was nothing we could do.”

And fuel issues for Ricciardo

Ricciardo wasn’t in a better situation than his teammate, as he suffered fuel issues during the race, not to mention that he was starting on the back foot from 14th on the grid.

“We ran into some issues with fuel, and we had to save which dictated our race,” he revealed. “So, not sure what happened but we obviously need to look into it.

“I’m looking forward to moving on. I think a weekend off is necessary for everyone involved.

“We’ll debrief now, try to understand the issues today and then we’ve got some sim time next week to get ready for the last two.

With yet another bad result for the great British team, they now find themselves 39.5 points behind Ferrari who now sit firmly in third in the Constructors’ Table. That targeted third place which at one point seemed a done deal is slipping away.