Brawn: Lewis Hamilton is my driver of the day 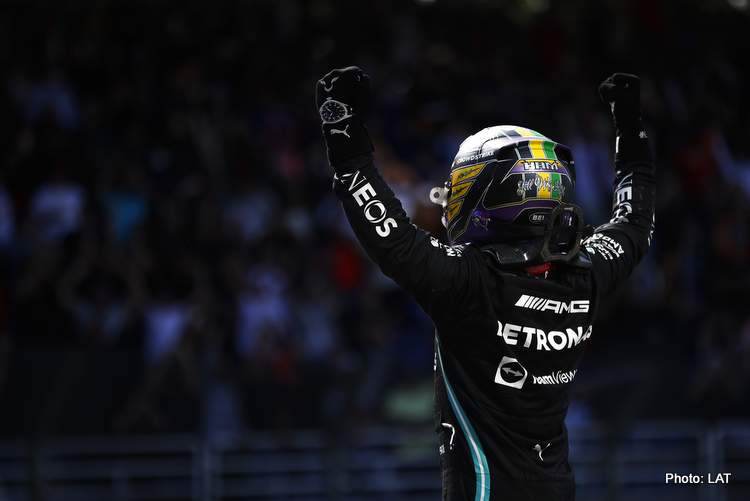 Formula 1 Managing Director of Motorsport Ross Brawn, hailed a fabulous weekend in Sau Paulo, as he insists that Lewis Hamilton was his driver of the day.

The F1 director took to his column on F1’s Official website to convey his opinions on the latest weekend of the sport in Brazil.

“It was a fabulous weekend from beginning to end and gave us the sort of drama, intrigue and excitement that only F1 can deliver,” Brawn wrote.

“It’s a sport of technology and of gladiatorial battles between drivers. We had everything this weekend.”

The Briton then spoke of the amazing atmosphere the Brazilin crowds provided, with their obvious adulation of Hamilton.

“The crowd at Interlagos were sensational,” he went on. “Lewis is a disciple of Ayrton Senna and that touched the crowd in Brazil.

“They have made him one of their own, a hero for them to cheer. It was inspiring to see them share their passion and it created an incredible atmosphere.

Despite Mercedes’ apparent advantage in Sao Paulo, Brawn believes that it was the Hamilton/W12 combination that achieved such a result.

“Mercedes had a stunning car this weekend and when you get someone of Lewis’ calibre with a car like that, he’s unstoppable.

“I’ve seen Lewis do that several times. And it’s impressive each time,” he admitted.

“He had a moment with Max, which everyone will have a different perspective on,” Brawn explained. “There were no dramatic risks.

“He dealt with the setbacks of an engine change and his disqualification from qualifying clinically and it was by far the performance of the weekend.”

Brawn also gave insight about the mindset of F1 drivers and how they deal with extreme pressure, like Hamilton did in Sao Paulo.

“They must get used to the setbacks not all under their control. They can turn negatives into positives – and Lewis did just that this weekend.”

The best Sprint this season

Ross Brawn did not neglect to praise the trialed Sprint format, he said: “Saturday’s F1 Sprint was, in my view, the best one of the three.

“It had plenty of action, with loads of battles – including Lewis carving his way through the field,” Brawn pointed out.

“It was a great Saturday afternoon of entertainment, an appetiser for the main course on Sunday.

“We had a fabulous Friday, too, with a dramatic qualifying session. It can never be underestimated how much of an impact the Sprint has on a Friday,” the 66-year-old insisted.

“With only one hour of practice, it creates some jeopardy heading into the rest of the weekend, as the teams are not as prepared as they can be.”

The F1 team owner turned director believes that the future is bright for the Sprint race format, with plans being made for the upcoming season.

“We think the foundations are very strong for the Sprint and will be presenting more details of our plans for six events in 2022 in the coming weeks in discussions with the FIA and the teams,” he declared.

“There are things we need to tweak but Brazil showed the Sprint is a great addition to the weekend and has made Friday, Saturday and Sunday big moments that are exciting for all of us.”

The stage is set

Brawn is enthralled about the prospect of the title fight going down to the wire over the final three races of the season with Qatar being next, and wrote: “We’re seeing a titanic battle for this year’s two championships, and the race in Brazil was just another twist in an engrossing tale.

“Mercedes had the edge this weekend, but it could swing back into Red Bull’s favour next time.

“It’s been fantastic. No one knows what will happen next.

“We’ve got two new venues to visit in Qatar and Saudi Arabia, before heading to the finale in Abu Dhabi where the circuit has had a series of modifications. The stage is set,” he assured.

“Congratulations to Guanyu Zhou on securing a seat with Alfa Romeo in 2022,” he said. “He’s shown potential in Formula 2 and remains in contention for the title with two races to go.

“It’s also great news that Alpine have promoted his title rival Oscar Piastri to the role of F1 reserve driver next season,” the Director added.

“Like Zhou, he’s an exciting talent and one step closer to racing in F1. ”

Brawn didn’t neglect to put in some nice words to the soon-to-be-unemployed F1 driver Antonio Giovinazzi.

“I’d like to thank Antonio Giovinazzi for his efforts over the last three years, flying the flag for Italy in F1 and I wish him all the best for the future,” Brawn concluded.