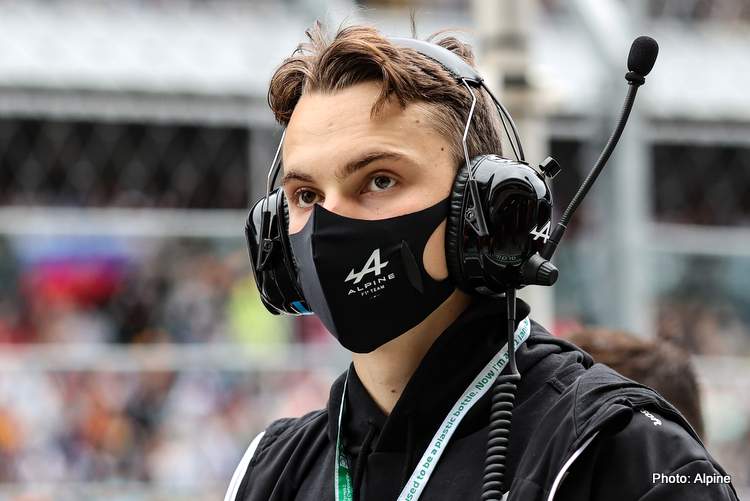 Oscar Piastri has taken a significant step towards his Formula 1 dream, as the Alpine F1 Team confirmed the highly-rated Australian 20-year-old as Reserve driver for the team.

The Melbourne native impressed mightily during his junior career, becoming Renault Eurocup Champion in 2019. A year later he had added the FIA Formula 3 title to his CV and with four points scoring rounds remaining in this year’s Formula 2 Championship, Piastri leads the standings.

Earlier this year, former F1 driver Mark Webber, who is part of Piastri’s management team, said of his young prospect: “He’s been performing extraordinarily well and is one of the hottest properties in junior motorsport in the world right now. Alpine, the academy’s been great for him, but he’s also been great for the academy. He’s doing extremely well.”

Piastri was reportedly is with a chance at Alfa Romeo, the only one seat unconfirmed for the 2022 F1 grid, but, clearly, that option went begging.

Instead, next season, Piastri will be reserve driver for Alpine’s regular drivers Fernando Alonso and Esteban Ocon,  replacing former Red Bull driver Daniil Kvyat who is their current F1 reserve.

Alpine F1 Team is delighted to confirm Oscar Piastri will graduate from the Alpine Academy to become Alpine F1 Team Reserve Driver from 2022.

Twenty-year-old Oscar, who hails from Melbourne, Australia, joined the Academy in 2020 on the back of winning the Formula Renault Eurocup title in 2019. He stepped up to the FIA Formula 3 Championship in 2020 and won the title as a rookie in stunning fashion.

This year Oscar has taken the FIA Formula 2 Championship by storm, catching the eye of the Formula 1 paddock with his three wins, seven podiums and three pole positions, which he achieved at three consecutive races.

Oscar currently leads the Formula 2 Championship with two remaining rounds to go in Saudi Arabia and Abu Dhabi and, should he win this year’s title, will join only George Russell and Charles Leclerc in an elite club to have won back to back Formula 3 (GP3) and Formula 2 titles as rookies.

In 2022, in his Reserve Driver role, Oscar will have an extensive testing programme to continue his preparation and training for a future Formula 1 race seat.

The Alpine Academy was established in 2016 by Alpine F1 Team’s predecessors, Renault F1 Team, to identify and nurture young talent through from the junior categories of motorsport through to Formula 1.

Oscar Piastri: “I’m super excited to be joining Alpine F1 Team as Reserve Driver. I’m looking forward to being much more involved with the team and contributing to its intended success next season. The Reserve Driver role is the next step towards my aim for a race seat in 2023, which is very exciting.

“I’ve proved myself in the junior formulas over the last couple of years and feel like I’m ready for Formula 1 now. Along with the trackside experience at race weekends, we will put together a substantial test programme in order to keep developing myself to grow even more prepared for a race seat. I’m very thankful to Alpine for their support.

“We’ve enjoyed two very successful seasons together in the Academy and I’m grateful for the faith they’ve put in me for this next step with an eye on a bigger future.

“My focus now is finishing the Formula 2 Championship in the best possible way with Prema and I’m looking forward to being back in the car and pushing hard on track.”

Laurent Rossi, Chief Executive Officer, Alpine: “Oscar’s natural talent is clear to see, so we’re very proud and privileged to have him as part of our team as our Reserve Driver from next year.

“Not only does Oscar have the on-track skills, as demonstrated over the last couple of years in the junior categories, but also the maturity and composure that makes him really stand out from the rest.

“At Enstone he has been a real asset to the team as he has aided the simulator and testing programme and I am certain he will continue to do so in his new role. The next step will be to consistently attend Grands Prix to fully integrate with the race team, learn what is expected of an F1 driver and be ready for when the opportunity comes.

“In addition, we look forward to having Oscar’s input and expertise in driving the team forwards next year. Oscar’s graduation highlights the success of our Alpine Academy and underlines its strength as one of the best young driver programmes in motorsport.

“We look forward to seeing our young talents continue to blossom through the years to come.”

Aussie, Aussie, Aussie 💪 @OscarPiastri is SIGNED as our Reserve Driver for 2022. Congratulations on your #AlpineAcademy graduation, Oscar, welcome to the Race Team.@AlpineRacing pic.twitter.com/3XhFAcCf0z