Norris: I think we’re in a good position 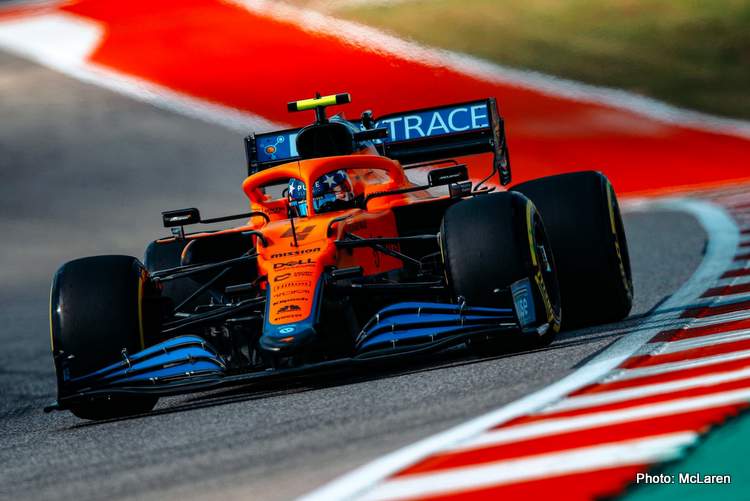 Lando Norris’ race in Turkey wasn’t outstanding, and McLaren’s advantage over Ferrari has diminished lately, but the Briton thinks he’s is a good position to score a good result at the 2021 Formula 1 United States Grand Prix.

FP1 saw the 21-year old finish almost two seconds off the pace in eighth position, but he was able to improve in the afternoon session where he finished second to Red Bull’s Sergio Perez almost three tenths down.

Speaking in his team’s media brief, Norris reflected on his Friday in Austin.

“A decent Friday,” he began. “It was warm today, and a bit tricky at times – quite bumpy and windy.”

Norris, however, seems to be satisfied of the speed of his MCL35M, despite the difficult track conditions; he said: “So not ideal in terms of driving conditions, but in terms of pace, relative to others, I think we’re in a good position.

“Tonight we’ll work to try and make it a bit nicer to drive, and a bit easier to have some confidence to push that little bit more come qualifying.

“Let’s see what we can do tomorrow,” he concluded.

Daniel Ricciardo, on the other hand, had an “up-and-down” day, ending FP1 in 16th, then jumping to fifth in FP2.

“It was a pretty good day, pretty solid,” he said in his team’s press release. “There are some good signs. Still some work to do, for sure, there’s a few things overnight – but nothing crazy.

“I think we’ll work through it, a few little set-up changes, but I think we’re in a decent place,” the Aussie explained.

“We’re obviously competitive, both cars in the top five, so I’ll try to find a few tenths overnight.”

Ricciardo seems to be relishing his time in Texas, and its lifestyle: “It’s just good to be back in Texas. The great state that is Texas.

“I’m Australian by birth, Texan by the good grace of God!” the Honey Badger – sporting a new helmet design as a tribute to his childhood hero Dale Earnhardt this weekend – concluded.

Norris and Ricciardo are fourth and eighth respectively in the Drivers’ Championship, as McLaren still sit in third in the Constructors’, 7.5 points ahead of a hard-chasing Ferrari.