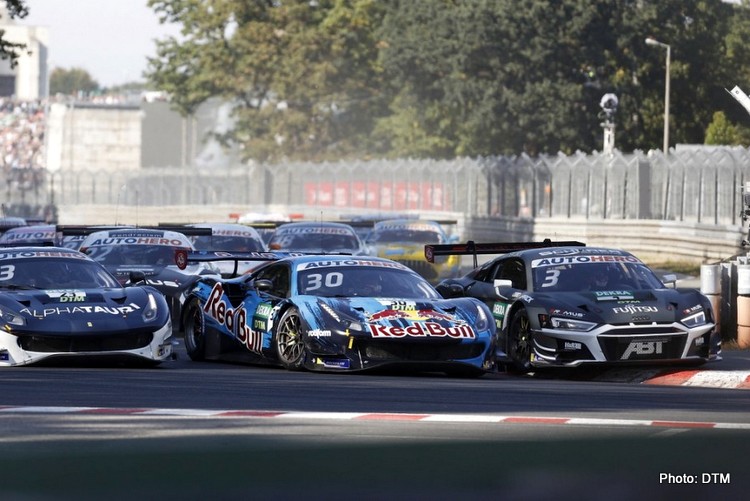 What should have been a grand finale for a superb DTM season run for the first time with GT3 cars at Norisring two Sundays ago, instead was an embarrassment for the series chief Gerhard Berger.

You might ask, why is this on an F1 news website? Because they highlight two sporting issues; one of which is Mercedes acting as a law unto themselves and, the second, a driver digging too deep into the black arts of racing with dangerous moves devoid of any sportsmanship whatsoever.

Lessons for all of motorsport came out that Sunday at Norisring.

The Formula 1 driver turned DTM chief Berger was dismayed by brazen team orders from Mercedes during the two-race weekend, while angered by the display of kamikaze driving from Audi ace Kelvin van der Linde which cost Ferrari driver Liam Lawson the title.

Max Götz became champion thanks to a Mercedes team order which called on the manufacturer’s drivers ahead of him to slow down, allowing the 35-year-old German to make the math’s work and become 2021 DTM champion for Team HRT.

Speaking for the first time after a drama-packed and highly controversial final weekend of the DTM season, Berger told Bild: “To be honest, I slept really badly the last few nights. I’ve been a motorsport fan through and through for 40 years and my sporting heart can’t cope with such orchestrated results.

“If a driver makes a decision in the interests of the team on his own initiative, that’s fine. But that is also the limit. It is absolutely unacceptable if teams or drivers are instructed to give up their position in order to shift the advantage elsewhere.

“In Formula 1 there are many examples of bad sportsmanship from the point of view of fans and the other teams. I only remember the wave of indignation Ferrari was confronted with by fans when Rubens Barrichello gave up victory for Michael Schumacher in his day.

“In our case, however, we are talking about a cross-team arrangement. This is a completely different scenario that I can neither personally nor professionally accept in our series. That means this topic is not off the table and I will personally work for a future solution.”

Berger emphasized and suggested a rule to prevent the farce in the future: “AF Corse deservedly won the team championship, as did Mercedes the manufacturers’ title. But if your title chances are taken away in this way in the last race, you can certainly understand that joy at Ferrari is restrained.

“The team, or the two drivers Lawson and Cassidy, had various options to influence the course of the race in their favour after the T1 incident. For example, by provoking a SafetyCar but that didn’t happen. So I have to take my hat off to Ferrari and AF Corse at this point: They showed what sporting fairness is all about ”

However, Berger, like most of the motorsport world, was left aghast with Van der Linde’s antics at the start of the weekend’s second race at the street venue: “In my opinion, Kelvin van der Linde overstepped the boundaries. His behavior in Turn 1 was not acceptable, neither from sporting nor safety aspects .”

Later in the race, Van der Linde’s robust (to be polite) duel with Gotz was also a talking point after the race, but not as offensive as the first move in Berger’s book: “The tough maneuvers against Götz can perhaps still be labeled hard racing.

“But we as a series cannot support the fact that he took the championship leader out of the race in the first corner, but in the end, it is a matter for the sports authorities.”

Nevertheless, after that final day, Berger, as DTM chief, is counting the costs for the series at the end of a transitional year: “Both topics, the Mercedes team orders and the Van der Linde maneuver, not only sparked discussions but also caused damage to the DTM.

“I am extremely sorry for all those involved who have contributed to the attractiveness of the DTM this season and who have done everything to ensure that the DTM stands for tough, fair racing right up to the last race, in which the best wins.

“Unfortunately, we didn’t manage to do that in the final and we are far behind in the favor of the fans.”

Despite the shenanigans by Mercedes, Berger had praise for the first champion of DTM’s new era: “Maximilian showed a constant, good performance over the entire season – so I’m happy for him. It’s not his fault the championship title has a somewhat bland aftertaste.”

In closing, Berger echoed the sentiments of DTM and motorsport fans: “Personally, I don’t see Lawson as a loser because he didn’t lose but was taken out of the last race. He behaved fairly in terms of sport and is the moral winner for me.”

A dismayed Lawson called Van der Linde the “dirtiest driver he had ever raced against” while social media blasted the 25-year-old South African who has taken GT racing by storm in recent years.

Thereafter, Van der Linde atoned for his actions in a Twitter post, confirming “I apologized to Liam for the actions that cost him the championship and how I handled the media that day.”