Alonso: The package is lacking in all areas 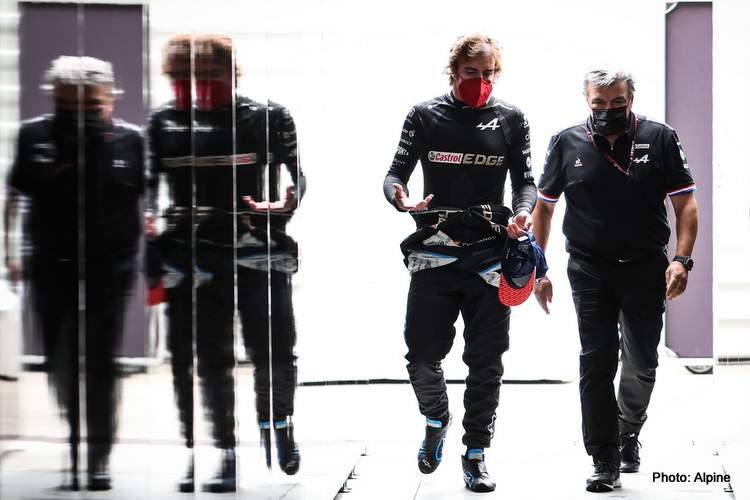 After the 2021 Turkish Grand Prix, Fernando Alonso claimed the Alpine A521 was lacking in all areas, leaving him frustrated and disappointed while lamenting that ‘luck’ has not been on his side this year.

Alonso qualified a fine fifth for the race at Istanbul Park last Sunday, only to be sent into a spin during a three-into-one-don’t-go situation, as they powered into Turn 1, at the start of the race.

He reemerged at the wrong end of the field. In front of him, Mick Schumacher in the Haas got a punt from the Alpine which sent the rookie’s car into a spin. Alonso got a five-second penalty for his shenanigans, and did apologize to the younger driver after the race

Nevertheless, the Alpine was near the front mainly because the two-time F1 World Champion takes the car by the scruff of the neck and puts it in places it has no right being.

“We’ve been historically this year a little bit less competitive on the intermediate tyres, and the whole race was intermediate, we didn’t even put the dry tyres on, so we need to improve our competitive level on that compound. But it’s frustrating and disappointing.”

However, under heavy skies and a wet track demanding intermediates all race long, the stage was set for an Alonso masterclass from the third-row but as they roared into Turn 1, Pierre Gasly’s AlphaTauri – sandwiched by Red Bull’s Sergio Perez on the inside and Alonso’ Alpine on the outside – had nowhere to go but into the side of the Blue car which spun.

Gasly was handed a five-second penalty for the punt which compromised the Spanish veteran’s race. And then Alonso was simply too brazen in his recovery, punting Schumacher’s Haas in the process that triggered his penalty.

Alonso explained to F1.com: “We touched each other, unfortunately, he had the spin and I got the penalty. I take it of course because I’m sorry to have the collision with him.”

“Him” of course being Michael Schumacher’s son, the legend whose five-year reign as F1 world champion with Ferrari, at the turn of the century, was brought to an end by Alonso and Renault.

“That happened only because I was P14,” continued Alonso. “I shouldn’t have been, but luck seems to keep avoiding us this year big time. I think it was an unlucky race for us. We qualified so well, P5 for the first time this year, and we were P5 for only 200 meters. After that, we were already facing backwards.

“So it is a little bit of a shame because I think the luck is not with us this year. After that we were P17 and nothing else happened in the race. Completely bored behind everyone, so I guess were are accumulating a lot of luck for next year,” mused the forty-year-old, in his 18th year as an F1 driver.

Of the first contact with Gasly, Alonso said: “I think the first corner is always difficult in these conditions. We were nearly for the first time on these wet tyres at the start together, so these things can happen.

“Unfortunately, it happened for us when we are top five, but I hope there are chaotic races next time when we are behind but not at the front,” added Alonso who lies tenth in his F1 comeback championship, with fourth place at Humgaoring in early August his best result so far.

The Spaniard has not won a Grand Prix since he triumphed for Ferrari at the 2013 Spanish Grand Prix. The Grand Prix in Turkey was his 327th start in the top flight.