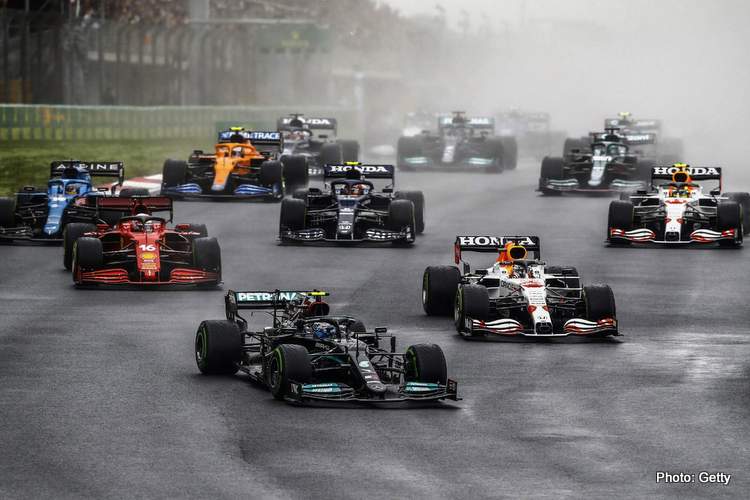 With conditions tricky again at the 2021 Turkish Grand Prix, some drivers shone, whilst others struggled on what was another wet race in this season.

But with all 20 drivers finishing the race, it didn’t prove to be as wild and hectic a wet race as we may have expected. However as is always the case, here we go for my drivers’ ratings from Sunday at Istanbul Park.

In what seemed like it maybe his last chance at a win in Formula 1, it was as strong a weekend as Valtteri Bottas could have asked for. A perfect start to the race was complimented with great race pace to keep Verstappen at bay.

A simple move on Ferrari’s Charles Leclerc inevitably saw Bottas claim his tenth career F1 victory, and it was certainly one of the Finn’s finest.

A perfectly sound weekend there for Verstappen. The Red Bull car all throughout practice and qualifying looking the second quickest so it’s the best result Verstappen was probably hoping for.

He regains the lead in the Drivers’ Championship going into the last six races, so all in all, a very good weekend for the Dutchman.

Wrapping up a very good weekend for the special one-off white Red Bulls I should add, with Sergio Perez getting on the podium.

Saturday wasn’t great with a P7 slot but an excellent start off the line saw Perez into P4 before Turn 3.

From there on in, the race pace wasn’t really there, but excellent defending on Lewis Hamilton in the final corners especially, was breathtaking to watch.

A nice move on Leclerc sealed the podium, and signs of Perez being back at his best are really showing now, which could be pivotal come the end of the season.

A fantastic weekend for the Ferrari driver.

As usual, Leclerc was immense in qualifying, which sets him up for good race finishes which we witnessed here.

You could say he was unfortunate with the call to stay out on the used tyres, as it worked as well as he maybe would have liked, and didn’t hamper his result to much taking the riskier strategy.

However he did lose the final place to Perez when he was forced to change tyres, but he can still be immensely proud of his time in Turkey.

It was never going to be easy with the 10-place grid penalty, however, Hamilton can be pleased with a P5 finish, even though he might regret the fact he ‘could’ have stayed out and finished a few places higher.

Hamilton started as we would have expected given his Saturday pace, blistering through the midfield until he came up against Perez.

Struggling to overtake the Red Bull hampered Hamilton’s progress and podium chances, and mix this with disagreements with the team about when to pit, then pitting too late into the race, left Hamilton stranded in P5.

Was it the right call or not? Who knows. But with a championship this close to the wire, I’d edge more on the side that it was the correct call.

I love Pierre Gasly. I should just have a copy and paste filter for Gasly every driver’s ratings saying, “another great weekend for the Frenchman”.

Again he was quality in qualifying, but started the race in sluggish manner, leading to his unfortunate touch with Alonso which gave Gasly an undeserved penalty in my opinion.

Beat the rest of the midfield pack other than the rapid Leclerc, so happy days for Gasly once again.

The McLaren’s looked bang average this weekend, and Norris had to drive a solid race to put his car P7, which is strange given their recent form.

Not really much to say on this one, just that it was a solid weekend and onto the next.

Driver of the Day, and for good reason too. Started at the back of the grid and just eased through the field like a hot knife through butter. Sensational driving.

A slow pit-stop hindered progress slightly, but he brushed it aside and just went out to overtake everyone near him again. P19 to P8 with a dodgy pit-stop mixed in there, that’ll do nicely!

Not as impressive as 2020 Stroll around Istanbul Park, but still a very good showcase of his skills this time round.

Similar to Norris however, he out-performed his teammate and drove just a really sound race and earned some valuable points for the team.

Them tyres were probably a few corners away from blowing up weren’t they! The only driver to commit to the zero stop race ultimately proved that with risk there is reward, as he earned the teams only points as his teammate had no chance after the first lap.

The tyre management with the ‘slicktermediates’ was perfect, and the skills shown to just get that car to the finish were phenomenal. Well done that man.

Outperformed his teammate in qualifying and in the race, made an excellent start jumping four places and just missed out on the points. Will feel disappointed to not break into the top ten but beating both Williams is a strong drive for the Italian.

Followed the pattern of his teammate with how Raikkonen’s race unfolded.

Like Giovinazzi, he made a strong start and had a solid middle stint, before being rapid towards the end of the race relative to those ahead on older tyres.

Saturday ultimately let him down, but all in all a solid finish for the Finn.

Daniel, please show the form we’ve seen from the second half of the season again, and not this please, thanks.

A terrible qualifying ending in Q1 made the decision a straightforward one to give him a new engine this weekend, leaving him P20 for lights out.

From here, he started slow but with an early pit-stop cruised up the order showing serious pace and into the top ten, but with his tyres taking a beating at towards the final stint, he fell off back down to P13.

A Q3 appearance on Saturday was the pace we all know Tsunoda is capable of, and following this form into Sunday holding off a rampant Hamilton for a few laps was also great to see from the Japanese driver.

But a spin dropped him right down the order and he just couldn’t recover from here on in. Some good signs though so he can be satisfied, all be it the costly mistake ruining his race.

Not even the Russell flair could help that Williams this time round.

A small mistake on Saturday hampered what could have been an excellent qualifying, something we’re accustomed to at this point.

But a mistake in qualifying hindered his race and he struggled to progress up the field. He held off Fernando Alonso for the majority of the race with what was I’m told at times an excellent battle, not that the broadcast cared much for it though.

Secured his first top-five starting spot since 2014, amazing. Spinning in turn one (albeit not his fault) and being at the back of the grid, sad times.

After his spin, however, a crash with Mick Schumacher was solely Alonso’s wrong-doing, and from there on in, he struggled at the back. Such a shame on what could have been a good point scoring weekend.

One to forget for Latifi as he struggled all weekend.

As usual he was out-qualified by Russell, and for the race, he spun at the start and only then managed to overtake the Haas cars.

Bit of a mad decision that, to try the slicks but who’s to blame, him.

Happy memories from last year were not to emulate themselves in 2021, with a poor race being made even worse with the slick medium tyres on the clearly still wet track, leaving him no grip and having to return to the intermediates.

Q2 in a Haas car in qualifying needs some love! What a result that was.

As for Sunday, his collision with Alonso wasn’t ideal but he managed to overtake Mazepin comfortably. But you can’t ignore the Saturday performance and without the Alonso spin, it may have proved a better result for Schumacher.

Way, way off Schumacher in qualifying, shows the gulf in talent between the two drivers. Ignoring blue flags to nearly wipe out Hamilton on race day wasn’t a good showing either, and so like with most race weekends, it’s one to forget for Mazepin.