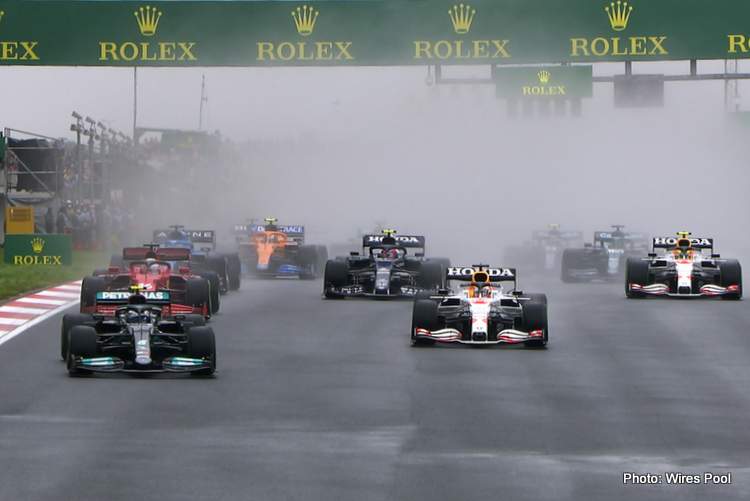 The Turkish Grand Prix served a proper show last year, with wet qualifying, a wet race and a grip-less track all ingredients for a thriller; ditto this year but despite the damp there was far more grip which turned the race into a bore.

We can thank Sergio Perez for his robust defending on Lewis Hamilton because that was the only highlight of the race with a mention of Carlos Sainz, whose slice through the field was entertaining as well, earning him Driver of the Day.

But the nature of the wet race in Turkey did not serve Mercedes with the advantage rain gave to Red Bull and Max Verstappen in Russia. The result was a disgruntled Hamilton settling for fifth (more on that later) and losing the lead in the drivers’ standings.

Now a six-point gap between the title contenders with 6 races to go is not a reason for any of them to moan or jubilate, because if we have learned anything this season, it is so unpredictable rendering predictions pointless.

And the 2021 Turkish Grand Prix is proof of this season’s volatility, which leads us to our Takeaways from Turkey.

With all due respect to Perez and Valtteri Bottas and their driving talents, they are wingmen after all, and their job is to make the lives of their respective teammates easier on track, as they slug it out for this year’s drivers’ Formula 1 crown.

The conditions of the Turkish Grand Prix, however, switched the roles, and the supporting drivers were the stars for a change, and boy did they ‘twinkle’.

Now Bottas inherited pole on Sunday due to Hamilton’s penalty, but to his credit, he was just 0.130s off the pace in Q3, and was faultless from the moment the lights went out. Keep in mind he had to deal with Verstappen at the start of the race, but he had the better reaction, kept his position and managed his race perfectly from then on.

What was more interesting was the manner with which Bottas treated his tyres on race day. That aspect of his driving was not his best, especially when compared to Hamilton’s tyre management skills.

Istanbul 2021 was a glorious moment for Bottas, compared to his spin-fest 2020 race, which he finished a miserable 14th.

One really wonders, how the Finn would feel – after his Turkey 2021 – about going to Alfa Romeo next year, and the real prospect that his tenth race win would actually be his last!

As for the second wingman in the 2021 F1 season plot, Perez really justified why Red Bull signed him, and extended his contract for 2022.

Despite starting further down the grid, his qualifying pace still lacking, during the race he was the perfect spanner in Hamilton’s works.

With Lewis climbing up for 11th fairly easily, his momentum came to a crushing halt at Perez’s rear wing, and was better off practicing reading some Japanese.

Perez will never be in Hamilton’s league as a driver, and the Red Bull was slower than Mercedes on the day, which makes the Mexican’s staunch defence on the seven-time champ all the more impressive.

He gave Verstappen the gap he needed to pit, and was there to pick up the final podium position after all the pit stops were concluded. Job well done.

With Verstappen politely accepting the fact the win was not up for grabs, and Hamilton having his own issues to deal with, the wingmen had their moment in the sun, pun intended.

“I feel like I should have stayed out” @LewisHamilton reflects on Mercedes’ race strategy at Istanbul Park#TurkishGP 🇹🇷 #F1 pic.twitter.com/Lmp7QYl135

A ‘what may have been’ moment for Hamilton

As I was watching the race, and listening to the debate between Hamilton and his team on whether to pit for new Inters or not, with the prospect that he might finish the race on the same set of tyres, and maybe win as well, I thought the first takeaway from the race would be: “Lewis Hamilton – Tyre Whisperer”

But we will never know what could have been, will we now?

Now opinions will be split on this point. Should the team have let Hamilton continue? Were the team right forcing him to pit? Should they have trusted him more?…

The list goes on, but the team ended up forcing Hamilton to pit way too late, that the remaining laps were not enough to get him out of the tyre graining phase, and the rest is history now.

But I would put the ball in Hamilton’s court, why didn’t he overrule his team and stay out being as confident as he claimed he was?

Had he stayed out and pulled a podium, forget a win, he would have been again the ‘Driving God’, not that he needs to prove anything, but imagine the reactions to such a feat.

Now we cannot make a direct comparison, but Sebastian Vettel felt strongly that he needed to try the slicks, which turned out to be a brain fade by the quadruple champion, but to his credit he stuck to his gut feeling and took full blame for the horrendous consequences.

Shouldn’t Hamilton have done the same? A ‘what could have been’ moment.

Not our weekend this time, but there’s plenty more in the season. 💪 pic.twitter.com/nFyNy8iYb0

Is Ricciardo driving for McLaren or Ferrari?

Now this title might be a bit too harsh. Of course, he’s driving for McLaren, he wears papaya overalls after all. But honestly, Daniel Ricciardo’s performances are giving Ferrari an advantage in the fight for third in the constructors’ standings.

Ferrari have mentioned on numerous times that third in the constructors’ this year is not a priority for them, but getting their sums right with the 2022 car is. So they took the strategic decision to focus on next year, and halt development on their SF21 early on this season.

But with Ricciardo still not getting his head around his mount this year, it won’t be a surprise if Ferrari get that third position regardless. Keeping in mind the performances Charles Leclerc and Carlos Sainz have been putting in recently, Ferrari have made up lost ground in their battle with the Woking-based squad, as they closed the gap down to 7.5 points only.

No matter how good Lando Norris is, he can’t take the fight to the Scuderia’s drivers on his own with his teammate AWOL unfortunately.

We all hoped that after his win in Monza, the real Honey Badger would be back, but based on how things are at the moment, maybe it has been a false dawn… Daunting times for the Aussie.

Hamilton and Perez served up a treat with this mini battle 🍿#TurkishGP 🇹🇷 #F1 pic.twitter.com/jOTcurRWue

Red Bull decided to celebrate their partners Honda, currently in their last season in F1, yet again. The one-off livery on the Red Bull cars was simply a sight to behold, and makes one wonder why the energy drinks outfit don’t do something different with their blue-dominated livery. Well they need to market their fizzy drinks, but F1 fans are selfish that way.

Back to Honda. They have come a long way since their fast tracked debut in 2015, where they were unprepared, and took the full wrath of McLaren for the poor performance, that is until the people at Woking had a wakeup call after switching to Renault power and found out their chassis was, well, crap.

Honda’s partnership with Red Bull and Toro Rosso (now AlphaTauri) has rejuvenated the Japanese manufacturer, and their development has been impressive to say the least. After all, it is never easy coping with the demands of Helmut Marko and Christian Horner. Cyril Abiteboul knows best.

Last time Honda left F1, Brawn GP that was born from the ashes of their F1 operation won both titles in 2009. At least this time, they can win the title before they ride off in the sunset.

A company with Honda’s motorsport heritage deserves just that.

Joy for @SchumacherMick and @HaasF1Team after he powers his way into Q2 in Istanbul 🙌 👊#TurkishGP 🇹🇷 #F1 pic.twitter.com/rBWuScqaYg

Kudos for Mick Schumacher on a brilliant qualifying, putting his Haas in Q2, where it never should be, and having a good start to his race before Fernando Alonso tagged him and ruined his afternoon. Regardless, he managed to beat his teammate Nikita Mazepin, who seems to have an issue dealing with the concept of Blue Flags.

Some glimmer of hope for AlphaTauri’s Yuki Tsunoda, reaching Q3 on Saturday, and showing some brilliant defensive driving against Hamilton, before spinning his car later on during the race.

An impressive recovery drive from Carlos Sainz, starting from the back and finishing eighth, not helped by another Ferrari pitstop antique. The Spaniard pulled off some nice overtaking moves on a day where he was at his brilliant understated self.

Some passes were smoother than others for Carlos Sainz as he made his way through the field from P19 to P8 😮#TurkishGP 🇹🇷 #F1 pic.twitter.com/vFU1vGGNAu