Alonso: Qualifying on Mediums a nice luxury to have! 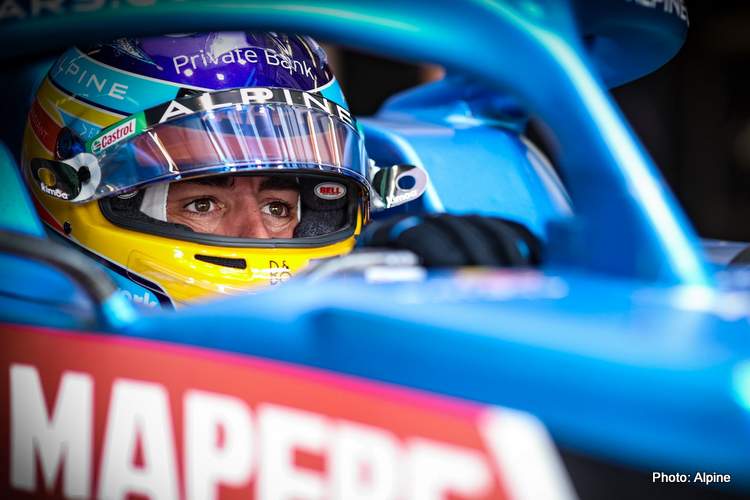 Fernando Alonso’s experience is proving to be a telling factor this season, as the Spaniard rediscovers his old form, finishing sixth in qualifying for the 2021 Turkish Grand Prix.

The Alpine driver was in fine form in tricky conditions at Istanbul Park, and will start the race from fifth on the grid due to, pole winner, Lewis Hamilton’s ten-place engine penalty grid drop.

In comparison, Hungarian Grand Prix winner Esteban Ocon in the sister car struggled to match his teammate – failing to make it beyond Q2 – the younger driver nearly a second slower than the veteran. He was also lacking in Q1 by a quarter of a second.

Alonso said in the team report: “It felt good today and I am happy with the result. The car felt fast, and I think we made the correct choice on which tyres to use in all of the sessions. We were also fast enough to qualify on the Medium tyres in Q2, which was a nice luxury to have!

“We seem competitive so I think we have a good chance to score points tomorrow. Let’s see if we can keep the pace with those around us. I think strategy will be key, as we saw tyre graining was quite high in dry conditions. We’ll be looking at the weather forecast and take it step-by-step,” added 40-year-old Alonso, who on Sunday will make his 331st Grand Prix start.

Alpine teammate Ocon was less enchanted with his afternoon at Istanbul Park: “It’s disappointing not to be in the top ten today as we probably had the pace to be there. Unfortunately, I had to abort my Q2 lap due to traffic and I wasn’t able to complete the lap.

“It would have been close to reaching Q3, but it happens like that sometimes. We’re fighting some inconsistencies with the car at the moment, which we’re working hard to fix. We’ll keep working as a team to progress and get on top of it. Our focus is immediately on what we can do tomorrow, and the aim is to try and work our way back to the points.”

Alpine Racing director Davide Brivio summed up his team’s day: “It was a tricky session with the weather and the possibility of rain during Q1, so we wanted to get out early and complete a lap time for both cars.

“It never really rained heavily enough to have a big impact, but it was nevertheless very challenging conditions for the drivers and for the Team. Fernando did extremely well today and will start fifth tomorrow with Lewis’ [Hamilton] penalty, so that is a good result for us.

“Unfortunately, Esteban couldn’t improve on his final attempt in Q2 meaning he starts in twelfth place. He will have a free tyre choice tomorrow, so let’s see if it can be an opportunity and we’ll try to recover some places for him and target a top ten finish.

“The car has shown some good potential this weekend, so let’s see what we can do tomorrow when it all counts,” concluded Brivio.