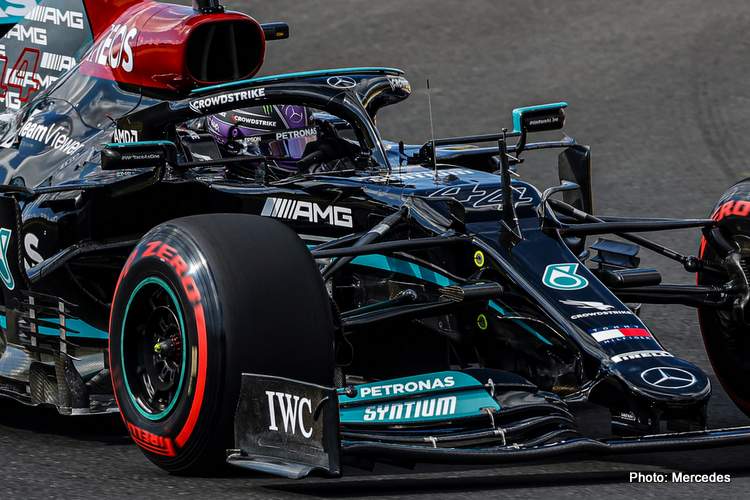 The signs were imminent from Friday that Lewis Hamilton was the man to beat in qualifying for the 2021 Turkish Grand Prix. He duly was fastest at Istanbul Park, on a day when Max Verstappen and Red Bull simply lacked the firepower.

The seven-time world champion put himself in the best position to recover from his engine penalty with pole on Saturday in Istanbul. He will start 11th in the race and will have to rise above the challenge of slicing to through the field to make sure Max Verstappen doesn’t regain the lead in the Formula 1 Drivers’ Championship.

Hamilton spoke afterwards: “The track is absolutely awesome with the grip level it’s giving us now. The session was really tricky with some damp patches, but it was a really great job by the team. I’m so happy with the performance, in terms of getting us out at the right time.

“You saw Max in the last race once he get behind sixth, but we’ve got the long straight down the back – hopefully we can give the fans a good race,” he concluded.

Hamilton’s teammate Valtteri Bottas was over a tenth behind in second position but will start from pole tomorrow after his teammate’s penalty is served.

The Finn spoke of his qualifying: “It was a good qualifying, not easy conditions, especially Q1 with the damp parts. There were some good laps, I really enjoyed it, and it’s the result we planned.

“Lewis with his penalty gets the minimum he can, and I’m on pole – so it should be good.

“I’ll focus on my own race tomorrow, that’s the way to go when you start in front, and try to keep up a good pace,” he vowed.

Verstappen simply lacked the pace for pole and had to settle for third, but will start second. He was over three tenthes slower than his title rival when the it mattered.

The Dutchman said after qualifying: “Going off at the beginning was tricky with the conditions, but compared to yesterday we managed to turn it around quite well. The laps overall were quite good, even though the last one we lost a bit down the straight.

“Overall, it’s quite a decent recovery compared to yesterday. Tomorrow, lining up in second, let’s wait and see what the weather will do, but overall I’m pretty happy.

“I should be a bit better, let’s see how competitive we will be in the race. The tyre wear seems quite high around the track, but it’s quite fun to drive.”

Charles Leclerc proved that Ferrari’s early pace was not a fluke, and secured fourth 0.069s off Verstappen.

Pierre Gasly was again at his impressive best putting his AlphaTauri where it doesn’t belong, which was fifth place, with Alpine’s Fernando Alonso in sixth over a tenth slower than the Frenchman.

Sergio Perez doesn’t seem to have sorted out his qualifying struggles and was seventh, half a second slower than his teammate. He will have another uphill climb up the order in the race where instead, he should be assisting Verstappen at the sharp end of the grid.

McLaren’s Lando Norris was eighth ahead of Aston Martin’s Lance Stroll in ninth, while Yuki Tsunoda was a welcome presence in Q3 after struggling for a while now. A great day at the office for the Japanese rookie, on a weekend where Honda is being celebrated. 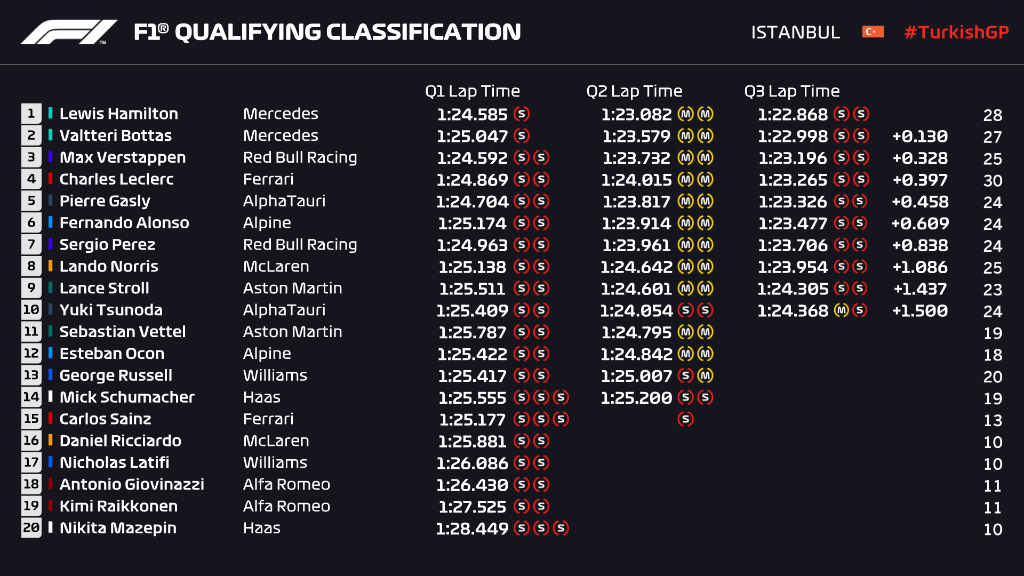 Q2 commenced in dry conditions, with most teams attempting to go through into Q3 on the medium tyres, which seem to be the better starting tyre.

The first of the casualties in Q2 was Aston Martin’s Sebastian Vettel who never seemed in sync to deliver a Q3 worthy performance. He will line up 11th for Sunday’s race, but with the chance to choose his tyre strategy.

Esteban Ocon was 12th, 0.165s ahead of George Russell, who lost his last chance at a Q3 appearance with a mistake on the final corner.

The impressive Mick Schumacher will start in 14th place, as Carlos Sainz was 15th but will start from the back of the grid due to his engine related grid penalty. Sainz did not run, but gave Leclerc a tow to help him get into Q3 after an early spin in the session put him on the back foot. 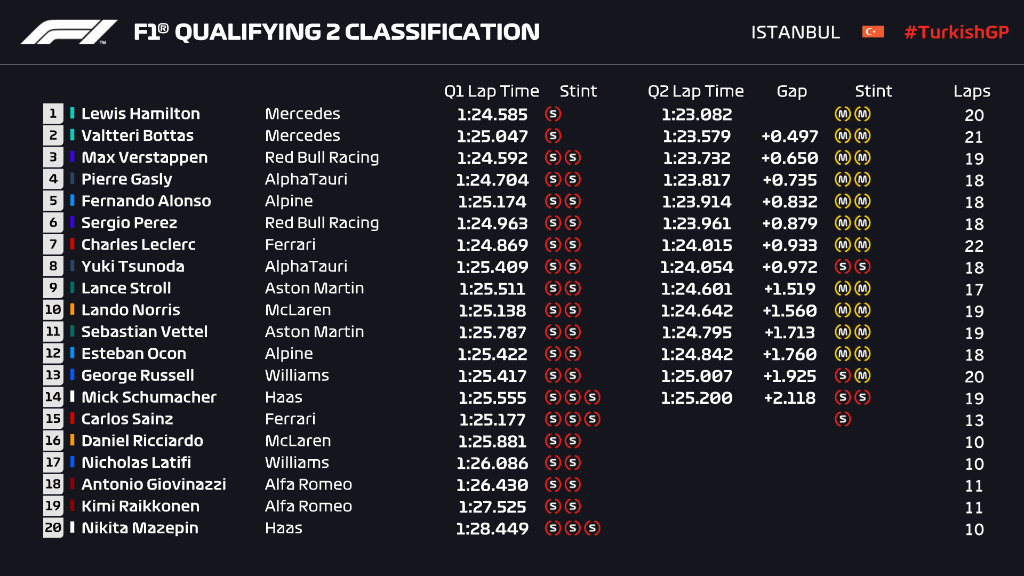 With rain on the horizon, all the teams sent their drivers out in a rush, to put a banker lap on the board using the soft tyres before the conditions worsened.

The major surprise was McLaren’s Daniel Ricciardo failing to make the cut into Q2 by 0.094s, and finishing a disappointing 16th, as Mick Schumacher equally surprised by making it into Q2 for Haas.

Nicolas Latifi was 17th for Williams, ahead of Antonio Giovinazzi in 18th, who out-qualified his veteran teammate Kimi Räikkönen in 19th.

Nikita Mazepin was last after several spins during the session. 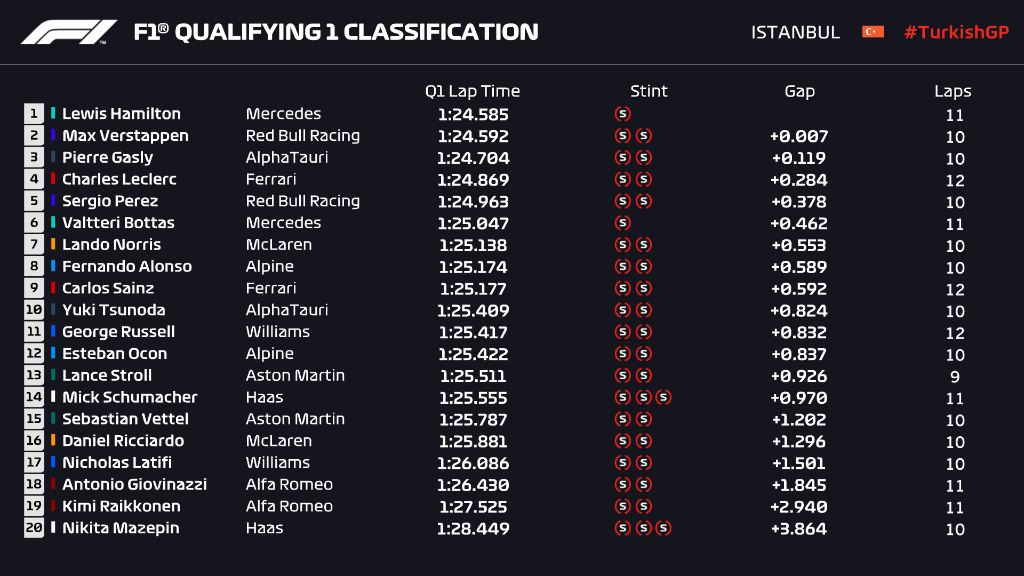