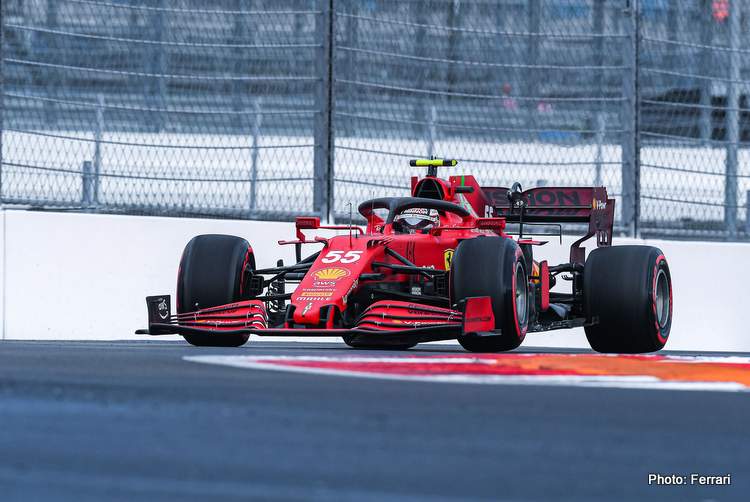 Coming to the 2021 Russian Grand Prix, Carlos Sainz was wary of the challenge they would face with their underpowered Ferrari SF21 sure to struggle on the Sochi straights.

The Spaniard who joined Ferrari this season, replacing four-time Formula 1 world champion Sebastian Vettel, was in for a really pleasant surprise on qualifying day, as the skies opened up on Saturday resulting in a properly wet qualifying.

With conditions leaning towards dry in Q3, Ferrari played their strategic cards right, and sent Sainz out on soft slicks with enough time for him to build the heat in them, and deliver a proper lap good enough for second.

Speaking after qualifying, Sainz said: “Very tricky. Right from the beginning, it was a tricky qualifying. After Q2 I could see there was a chance slicks would come into play. A good lap on the limit.

“This weekend we are looking a bit strong. Probably our weakest conditions were on the inters. There are the two Mercedes and the Red Bulls who we expect to be much quicker tomorrow but we will put up a fight.

“I need to make sure I do my homework overnight to make sure we don’t lose too much on the line on the dirty side,” insisted Sainz.

Later, in his team’s press release, Sainz reflected in detail on his qualifying session: “It’s been a tough quali session but I’m proud how we managed the situation to end up putting a great lap together for P2.”

“I like these tricky conditions and I really enjoyed that last attempt on the slicks. We were one of the first ones to cross the line and the wait until P2 was confirmed was tense, as the track was drying quickly!

“Front row for tomorrow is a good result, and I’m happy, but I would have preferred to keep pole!” continued  Sainz lamenting losing the top spot start to his former McLaren treammate Lando Norris.

“Tomorrow it’s very likely to be dry and we had a decent pace yesterday. Graining on the front tyres will be challenging but I will give it all from the very first lap until the end. Congrats to Lando on his first pole! It’s good to start beside him,” the Ferrari driver concluded.

Tomorrow’s race will be Sainz’s 15th in Red. It is the first time he starts on the front row in a Ferrari.

Definitely a great one 😎🌶